Accessibility links
After Katrina, New Orleanians Weigh Return to Home Hurricane Katrina damaged an estimated 160,000 homes in New Orleans alone. Many remain empty, and their owners face a huge decision: whether to invest time and energy fixing up a home that may become worthless or cut their losses and find a new place to live.

Hurricane Katrina damaged an estimated 160,000 homes in New Orleans alone. Many remain empty, and their owners face a huge decision: whether to invest time and energy fixing up a home that may become worthless or cut their losses and find a new place to live. 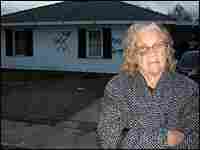 Louise Serpas, 74, stands in front of her home in St. Bernard Parish. She is living in the house, which has no electricity, water or sewer. Despite the risk it may be condemned, Serpas is paying workers to renovate her home. Jeff Brady, NPR hide caption

In New Orleans, Hurricane Katrina damaged about 160,000 homes, most of them flooded in the storm's aftermath. Many remain empty, and their owners face a huge decision: whether to invest time and energy fixing up a home that may become worthless or cut their losses and find a new place to live. NPR's Jeff Brady reports.

Coffee Drive in St. Bernard Parish east of New Orleans is lined with small houses built after World War II. Before Katrina, it was a mix of young families and retirees. But now when 74-year-old Louise Serpas looks down the street, she sees vacant houses and a single FEMA trailer; only one of her neighbors has returned.

Ms. LOUISE SERPAS: Water went all the way to the roof. See the line on the top?

BRADY: She's already halfway finished rebuilding. Insider her white house, Serpas points to electrical wiring that's been replaced, insulation that was installed and a new sink that will be plumbed soon. She's living in the house with her husband, Lee(ph), even though it doesn't have water, sewer or electric service.

Ms. SERPAS: To use the toilet, you have to carry the water in. And sometimes that's 1, 2:00 in the morning.

BRADY: Serpas feels alone in her resolve to rebuild. Up and down Coffee Drive houses sit full of smelly furniture and spreading mold. She feels abandoned spiritually, too.

Ms. SERPAS: Try to make the best of it, and God ain't helping us, so I hope the devil is.

BRADY: Serpas owns her home and planned to live out the rest of her days here. She's fixing it back up because, she says, she doesn't have anywhere else to go. Serpas is taking a risk. Parts of her neighborhood likely will be condemned, and there's a chance that her house will be, too.

BRADY: So she stays and hopes that rebuilding now is the right decision.

Over in New Orleans, Hank Clemitis(ph) is waiting to rebuild. He deals with the aftereffects of Katrina through humor. At his annual holiday party, he plugged in a portable public address system and performed a song for his guests.

Mr. HANK CLEMITIS: (Singing) On the first day of Christmas, Katrina gave to me my boat sitting in an oak tree.

BRADY: Clemitis' house was flooded with seven feet of water. It'll have to be torn down. He says he wants to rebuild, but he needs answers to some basic but very important questions. Will the levee next to his house be strengthened? If so, how much of his land will the government have to buy to do that? He also wants to know if FEMA will pay for demolishing his flooded home. But the answers are slow in coming. As guests leave the party, he says a lot of homeowners are holding off.

Mr. CLEMITIS: I think some people are just waiting for after the first of the year, seeing how much of the population returns.

Night, folks. Night. Thanks for coming.

See how much of the population returns, how the school system is going to be set up, that type of the thing, and then how much money the, you know, current administration comes up with.

BRADY: `Wait and see' is Tom Gray's strategy, too. He's a guest at the party and steps outside to take a break. Gray owns five rental properties near Tulane University. All of them were flooded and need extensive repair work.

Mr. TOM GRAY: I'm basically just waiting to see what my neighbors are going to do because they're rental properties. And if I throw a lot of money into them now and nobody else does anything, then I've made a bad investment. I know that the neighborhoods are going to come back. The question is when.

BRADY: Gray says he's going to use his insurance money to pay down his mortgages. Meantime, he'll get a job to make up for the lost rental income. It's going to be a while before Gray and other property owners get some certainty from their government. New Orleans is still in the earliest stages of determining how the city will be redeveloped. Big questions remain unanswered, making it difficult for many with property to make decisions about their future. Jeff Brady, NPR News.