Accessibility links
Sifting Through Official Speak on Bird Flu The most recent wave of bird flu began spreading across Asia in 2003. So why is the U.S. government sounding the alarm now? Risk experts assess what's true, and what's misleading, in the Bush administration's statements on the risk of a flu pandemic. 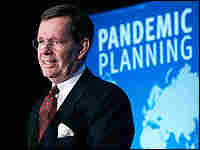 Federal officials are saying some scary things about bird flu these days.

Millions of birds in Asia have been slaughtered in an attempt to stop the spread of avian flu. Since 2003, there have been 141 cases of infection in humans, with 73 deaths.

Cambodia: Reported its first outbreak of bird flu among poultry in 2003 and its first human case in 2005. It's had four confirmed human cases so far, all of them fatal.

China: Battled dozens of bird-flu outbreaks among poultry before confirming its first two cases in humans in November. Six human cases have been reported so far, two of them fatal. The most recent involved a 35-year-old man from Jiangxi province, who remains hospitalized; he was thought to have been infected through contact with sick ducks.

Indonesia: Most recent confirmed case involved an 8-year-old boy from Central Jakarta who died Dec. 15. The country has had 16 confirmed cases, all of them in 2005; 11 have been fatal.

Thailand: Most recent case of bird flu involved a 5-year-old boy who died Dec. 7. Results suggest the child was infected from dead chickens in his neighborhood in Nakhonnayok province. It was Thailand's second bird-flu death this year and its fifth confirmed case. Since 2004, Thailand has reported 22 cases, 14 of which have been fatal.

Vietnam: Identified its first human cases of bird flu in January 2004. Since then, the country has reported 93 human cases, 42 of them fatal.

Earlier this month, for example, Health and Human Services Secretary Mike Leavitt said the virus that causes bird flu "could become one of the most terrible threats to life that this world has ever faced."

That's true. But it's hardly news. The current version of bird flu began infecting people back in 1997. Since then it's caused the deaths of about 150 million chickens and more than 70 people.

The most recent wave of bird flu began sweeping across Asia in 2003 -- long before the Bush administration began issuing a stream of dire warnings.

Risk communications expert Peter Sandman says that's not because the virus became more of a threat recently. Sandman says the change appears to be a response to criticism that the government wasn't prepared for another known threat: Hurricane Katrina.

Sandman and his wife, psychiatrist Jody Lanard, have done work on pandemic preparedness for the World Health Organization, the Centers for Disease Control and Prevention, and the Department of Health and Human Services. Sandman also works as a consultant on risk communications for a range of corporate clients.

Together they've written dozens of articles on how to communicate the risks associated with bird flu and other infectious diseases.

Lanard says her own interest in bird flu began well before the Bush administration started talking about it so publicly.

"I became concerned and then alarmed about pandemic influenza in about January 2004," she says, "while Thailand was still covering up the very obvious signs they had bird flu outbreaks in their poultry. I thought about what we should do. I thought about stockpiling food. I felt the fear of this thing spreading in Thailand."

Lanard spent months learning everything she could about the virus and its risks.

Lanard and Sandman say risk communicators must walk a tightrope. On one side is the risk of promoting irrational fear. On the other side is irrational complacency. The goal is to instill appropriate fear that gets people to take appropriate precautions.

Sandman and Lanard praise the Bush administration for finally sounding the alarm about pandemic flu. But they say the administration's message has been undercut at times by statements that are misleading, self-serving or simply wrong.

One example is an image federal officials frequently use to describe the pandemic.

In a speech at the National Institutes of Health, President Bush described it this way: "A pandemic is a lot like a fire, a forest fire. If caught early it might be extinguished with limited damage. If allowed to smolder undetected it can grow to an inferno that spreads quickly beyond our ability to control it."

Lanard says the forest fire image does capture the speed at which a pandemic can spread. But she says it's profoundly misleading to suggest that a flu pandemic can be snuffed out like a smoldering cigarette.

"The quote as it stands gives an overly optimistic impression of the likelihood of stomping it out," she says. "This has never been done. Surveillance is terrible in most of the developing world."

And even if someone did, scientists say it's far from certain the virus could be stopped.

Sandman says a better model for a pandemic might be a natural disaster like a tsunami -- or Hurricane Katrina.

Sandman says government officials sometimes mix true statements with statements that are demonstrably false. HHS secretary Leavitt, for example, has said, "When it comes to a pandemic, we are overdue and under-prepared."

Sandman says it's true the U.S. isn't prepared. But he says it's nonsense to think that just because there hasn't been a flu pandemic since the 1960s, we are somehow overdue.

"There's a name for that," Sandman says. "It's called the gambler's fallacy. It's exactly like somebody who's playing the roulette wheel, who notices that number 17 hasn't come up all night and bets on 17 because 17 is overdue. And what any statistician would say is every spin of the roulette wheel is a new random event, so there is no sense at all in which we are overdue."

Sandman says if people believe the gambler's fallacy, they'll expect the risk of a pandemic to rise every year one doesn't arrive. That's not how it works.

He says they'll also tend to think that if a pandemic does arrive, the risk of another one has been reduced. That's not true either.

Sandman and Lanard say even some true statements can be misleading.

In describing his plan to prepare for bird flu, President Bush said, "We must protect the American people by stockpiling vaccines and antiviral drugs, and improve our ability to rapidly produce new vaccines against a pandemic strain."

Lanard agrees that the government should be doing exactly those things.

But she says they shouldn't be suggesting these measures will protect us -- at least not anytime soon. At the moment, there is no human vaccine against bird flu. And it's far from clear that antiviral drugs will offer people much protection.

Lanard says the president's message has another problem: "It's a passive message to the public. It's the government as big father. The government is going to take care of you. And that is not what the public needs to hear in order to provoke preparedness."

Sandman and Lanard say that in the short run, individuals can do far more than the government to protect themselves.

For example, he says, people can keep extra food in case a pandemic disrupts distribution systems. They can prepare to work from home, in case it becomes hazardous to be in contact with other people. They can learn proper hand washing techniques to keep from spreading the virus.

And Sandman says there's another reason for the government to involve the public in any bird flu preparations.

"Everything that's known about the psychology of fear tells us that people can tolerate more fear if there is something for them to do," he says. "So it's not just inaccurate for the government to imply that the government will take care of it. It's not only getting in the way of the public's beginning to take preparedness more seriously. It's getting in the way of the public's ability to endure the threat of the pandemic itself."

Sandman and Lanard say the government seems overly concerned about panicking the public. They say history shows that's not likely, and that the right information now would reduce the risk even more.

Lanard says the more a person knows, the more realistic they'll be about pandemic flu. She says that's certainly true for her.

"[Bird flu] is one of the main things I think about," she says. "But I don't lose sleep over it. I don't think that every new case that comes out of China is it. It's already settled in my mind as one of the risks in the world.

Lanard and Sandman say people need to think about bird flu the same way they think about other real risks, like car accidents, or cancer, or even another hurricane like Katrina.