Accessibility links
Building a University, and Hope, in Ghana After nearly 20 years in the U.S., Patrick Awuah left his job at Microsoft and returned to his native Ghana. His goal: to help educate Africa's future leaders in ethics and entrepreneurship.

Listen
Building a University, and Hope, in Ghana 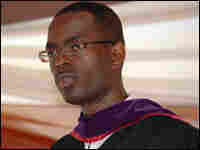 After becoming a Microsoft millionare, Patrick Awuah returned to his native Ghana to found Ashesi University. The school graduated its first class on Dec. 17. Courtesy of Patrick Awuah hide caption

Ashesi is located in a suburb of Accra, the capital of the West African nation of Ghana. About 80 percent of the university's students are from Ghana. The rest are from other nations in Africa. Melody Kokoszka, NPR hide caption 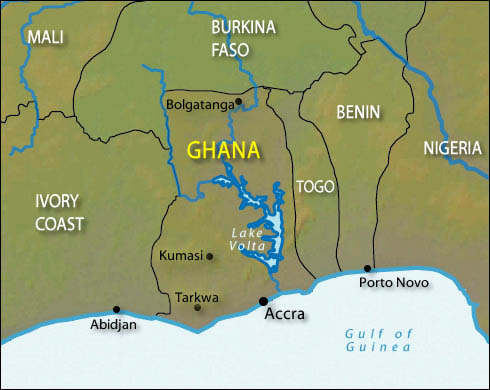 Ashesi is located in a suburb of Accra, the capital of the West African nation of Ghana. About 80 percent of the university's students are from Ghana. The rest are from other nations in Africa. 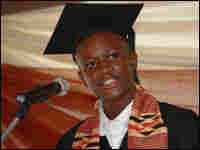 Andrew Tarawali, who just graduated with a degree in business administration, says his time at Ashesi imbued him with a sense of mission. "We are the hope," he says. "The world is going to be watching." Matthew Taggart hide caption

This story is part of a series exploring how immigrants in the United States give back to their homelands. Hear other reports and learn more about this series: 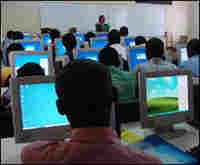 Ashesi students attend a computer class. Computer science is one of two four-year degrees offered at the university. Courtesy of Ashesi hide caption 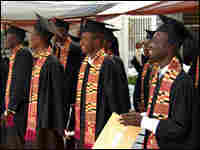 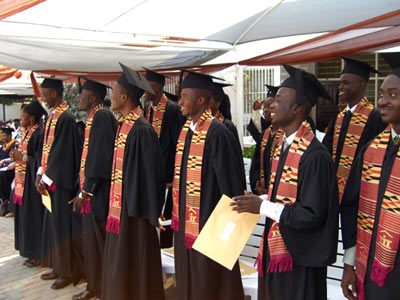 After living in the United States for nearly 20 years, Patrick Awuah moved back to his native Ghana, in West Africa, to start a new university in hopes of educating Africa's next generation of leaders. Ashesi -- which means new beginnings -- recently held its first graduation.

Awuah, the 40-year old founder and president of Ashesi University, left Ghana in the mid-1980s, when the country was under military rule. He graduated from Swarthmore College with an engineering degree in 1990. Soon after, he joined Microsoft, moved to Seattle and became a millionaire before he was 30.

"I left Ghana quite idealistic," Awuah says. "I felt that I would get a great education, I would get some expertise, I'd be very needed here and come back. Well, having worked at Microsoft, having lived in the United States for five years, I changed. And I just felt like, if I ever come back here, I lose everything."

But becoming a father made Awuah reconsider moving back to Ghana. "Having a son caused me to reevaluate all my priorities," he says. "This was something that was eating at me. What kind of world is it that my son is going to grow up in? And how is Africa represented in that world?"

That question prompted Awuah, to relocate to Ghana with his American wife, Rebecca, young son, Nana Yaw, and infant daughter, Afia. His goal: to establish an Ivy League-quality university in his home country and train the next generation of African leaders, with a focus on ethical entrepreneurship and integrity. His wife bought into that dream, and the Awuahs invested more than half a million dollars in the Ashesi project.

Awuah still travels to Seattle to fund-raise for Ashesi. He counts some of his former Microsoft colleagues among those -- including private foundations and corporations -- who have contributed to the $4.5 million used to build the university since 1999.

A Unique University in Africa

Ashesi is a private, hi-tech university in a leafy residential suburb of Ghana's capital city, Accra. Its campus and facilities present a stark contrast to Ghana's five public universities. At these government colleges, enrollment has soared to 65,000 since 1990, and overcrowded lecture halls, substandard student residences, rising tuition fees and poor staff salaries have led to angry protests and frequent strikes. However, tuition at public universities is also much cheaper than the $4,500 in fees that Ashesi charges.

Ashesi's latest freshman class has 90 students; its total student population is 220, and its staff is well paid. About 80 percent of the university's students are from Ghana. The rest are from other nations in Africa, a continent where most children don't go beyond elementary or high school, let alone finish college. Awuah says about half the students receive financial aid.

On Dec. 17, four years after enrolling its first crop of freshmen, Ashesi issued its first diplomas to a graduating class of 20 students. Nina Marini, a former graduate school classmate of Awuah's at the University of California at Berkeley, flew in from Seattle for the commencement ceremony. Marini co-founded Ashesi and is one of the university's trustees.

"It's been an incredible journey, coming from something that was in Patrick's mind as a vision, as a dream, and being part of really taking every step with him in terms of realizing it," Marini says.

From Dreams to Action

Ashesi offers two four-year degrees, in computer science and business administration, both of which also emphasize a broad foundation in liberal arts. Derrydean Dadzie, a third-year computer science major, says his time at the university has changed him. "I always say that Ashesi is like going through a goldsmith's place," Dadzie says. "You're like raw gold. The school is like a furnace. The heat from all the courses, from the professors, from the projects that you undertake -- you come out as a refined substance, you come out glittering. You dream beyond your world."

Elizabeth Ohene, Ghana's minister in charge of universities, attended the recent graduation ceremony. She says Awuah is making a valuable contribution to higher education in the country. "One is very grateful for people like Patrick Awuah who have taken up this challenge, and for what he is doing here," she says. "The old way of the state providing tertiary education for everybody who wants to go is obviously not sustainable."

Andrew Tarawali, a graduating senior from Sierra Leone, says attending Ashesi was a turning point. "We've said a lot about how different we are, how we are going to change Africa, how we are the hope," Tarawali says. "The world is going to be watching to see whether the truth was said."

Awuah is proud of his first graduating class, but he still recalls the trepidation with which he first greeted these students four years ago. "The moment that students walked into the gates at Ashesi, my emotions were wild," he says. "I was very excited, but I also wanted to crawl under my desk, because these were human beings, people's kids who had put their lives in my hands, their future careers in my hands. That was scary."

Asked if he would like to see his dream replicated across Africa, Awuah says, "Yes. But I think that dreams that don't go with action are not very useful."