Accessibility links
Odetta Remains A Powerful Voice For Justice Folk-music legend Odetta was a force in the 1960s push for social justice. Her passion inspired fellow musicians and activists such as Joan Baez, Bob Dylan and Harry Belafonte. Odetta died Dec. 2, 2008, at the age of 77. Hear a 2005 interview.

Listen to more of Steve Inskeep's interview with Odetta.

Odetta explains how she got her name

Odetta sings a spiritual and explains her phrasing

Folk-music legend Odetta died Tuesday at the age of 77. In this 2005 interview, she discusses her long and diverse career. 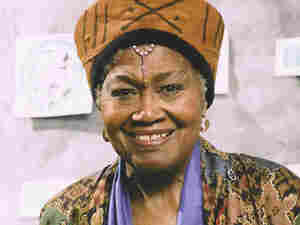 Odetta Holmes Felious Gordon has shaped American folk music for more than 50 years. Born in Birmingham, Ala., in 1930, Odetta lost her father at a young age. Her mother remarried and gave the children their stepfather's name, Felious.

At age 6, Odetta moved to Los Angeles, where she began to study music seriously at age 13. While studying opera at Los Angeles City College, she discovered folk music.

Accompanying herself on a guitar she nicknamed "Baby," Odetta made her solo debut in San Francisco in 1949. In 1953, she moved to New York, where Harry Belafonte was among the first to discover and promote her. He included her in a major TV special that boosted her career.

Odetta's style inspired Joan Baez and Bob Dylan at the start of their careers, while Belafonte credits her with teaching him about the use of dramatic interpretation in song.

In the liner notes Belafonte wrote for her album My Eyes Have Seen, he wrote, "Few... possess that fine understanding of a song's meaning which transforms it from a melody into a dramatic experience. Odetta, who has influenced me greatly in this area of dramatic interpretation, is just such an artist."

Here, Odetta speaks with Steve Inskeep and shares some songs. Her stories round out a Morning Edition series on "The Long View," featuring discussions with people who have performed at the height of their field for decades.