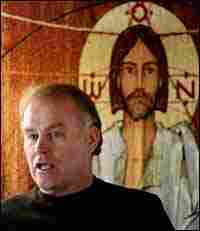 Father Ned Reidy was a Roman Catholic priest in good standing for nearly 20 years before leaving the church in 1999 to join the Ecumenical Catholic Communion. Photo courtesy Terry Pierson / The Press-Enterprise hide caption

A Roman Catholic diocese in Southern California has put a former priest on trial on charges of heresy. The San Bernardino Diocese says Father Ned Reidy is leading Catholics astray with his breakaway parish near Palm Springs. While a secret diocese tribunal deliberates on a verdict, Father Reidy continues to celebrate Mass for his small but devoted congregation at the Pathfinder Community of the Risen Christ in San Bernardino, Calif.

Reidy left the Roman Catholic church in 1999 to join the Ecumenical Catholic Communion, a denomination that now boasts more than a dozen parishes nationwide. While Catholic in name, it splits with the Vatican over some fundamental church doctrines. Unlike heretics of old, Reidy does not openly rail against Roman Catholic teachings with which he disagrees. He says he just offers an alternative.

A Brief History of Heresy

"We're involved in ministry here: women's ordination and calling men who are married and who've all their lives wanted to be priests," Reidy tells Steven Cuevas of member station KPCC. "I'm involved with priests who've left, who are just floating around. We're involved in preaching a good news that a lot of people have never heard before."

It's a message that resonates with some Catholics. Gene Philips is a regular at Pathfinder. A staunch anti-abortion Catholic, he broke away after a priest told him that as a divorced man, he could not receive communion.

But in the eyes of the Roman Catholic Diocese of San Bernardino, Father Reidy is a heretic -- someone who goes against basic church teachings. Father Howard Lincoln, a spokesman for the San Bernardino Diocese, says the rare heresy trial is necessary to clarify Reidy's status within the church: He is no longer a Roman Catholic priest. The diocese fears that by using the word "Catholic" in his denomination, Reidy could mislead some worshippers.

"Ned Reidy made promises to his religious community and vows at his ordination, which he publicly broke with the Roman Catholic Church with the establishment of another denomination," Lincoln says.

Reidy is also charged with schism, which is defined as a failure to submit to the authority of the pope or of church leaders.

Reidy doesn't deny the charges. But he says the diocese no longer has jurisdiction over him. If found guilty, Reidy would be formally defrocked and ex-communicated from the Roman Catholic Church.

Reidy was a Roman Catholic priest in good standing for nearly 20 years in the Palm Desert area of Southern California. Tom Roberts, editor of the National Catholic Reporter, says he understands if the diocese might feel a little threatened by Reidy's breakaway denomination.

"If he's an effective minister, someone who's been high profile in the community, and he leaves and co-founds his own denomination, I can understand the bishop wanting to make a special statement about this person," Roberts says. "I also don't think Catholics are confused by these issues. I don't think they would mistake this person as a Roman Catholic cleric."

Whatever the verdict, Reidy can always appeal to the Vatican. But he says he won't. He didn't attend his heresy trial, and he says he plans to continue his ministry regardless of the verdict.