Accessibility links
Separating the Footnotes from the Milestones Journalists can't seem to resist predicting the future despite the high risk of looking foolish. One reason is that the temptation to play the seer is strong. Another is that we are lured into peeking over the hill by the need to evaluate where we are right now.

Separating the Footnotes from the Milestones

Separating the Footnotes from the Milestones 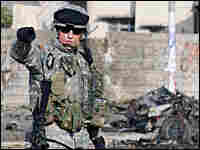 U.S. soldiers secure the scene of a car bombing in the northern Iraqi city of Kirkuk, Dec. 25. hide caption

Journalists can't seem to resist predicting the future -- in essence reporting the news before it happens -- despite the high risk of looking foolish. One reason is that the temptation to play the seer is strong. Another is that we are lured into peeking over the hill by the need to evaluate where we are right now.

When we wonder about which recent or current events are really important, we are soon asking which ones will still matter after months or years have gone by.

Sometimes, historical significance is beyond obvious. The Pearl Harbors of history, the big invasions and assassinations and Sept. 11 attacks, announce themselves immediately.

More typically, it takes some time to sort things out. Almost no one thought the Watergate burglary of June 1972 was all that important a story that year. Soon after, it was the only story in town.

There's no trick to naming the big news obsessions of Washington 2005. We were transfixed by the war in Iraq and by the spectacle of Hurricane Katrina, captivated by the changing of the guard at the Supreme Court, mystified by conflicting signals in the economy and intrigued by a tangle of political scandals involving torture, spy leaks and domestic surveillance (as well as the usual money and power).

Great stories, all. But some will endure as watershed events for the nation, important for a generation or more. Others may be this year's Y2K bugs.

By the way, do you remember that huge kerfuffle over the capture of a U.S. reconnaissance plane off the coast of China in 2001? Neither does anyone else.

Katrina will surely be a milestone of the first order for the Gulf Coast and for millions who were directly affected. But will it reverberate beyond? In the fall, some predicted that the scenes of horror from New Orleans would spawn a reconsideration of race relations and a new era of concern for the nation's underclass. If that's happening somewhere, it's not apparent in Washington. An initial surge of sympathy has ebbed, and the victims are finding out the degree to which they're on their own.

Katrina was also set forth as a potential turning point for the Bush presidency, the moment at which his re-election momentum disappeared and disappointment overtook his second term. But by year's end, Mr. Bush was battling back in the polls and showing signs of resilience on the issues. Looking forward, Katrina's historical and political legacy is uncertain.

Iraq, fast becoming not just the story of the year but of the decade, has also been the biggest source of interpretive disagreement. For the Bush administration, the Iraqi elections held in January, October and December made for a happy headline. For the administration's critics, the dominant reality remains Iraq's violent insurgency and persistent political division. And for most of the country, the most resonant moment of the year may have come when U.S. combat deaths passed the 2,000 mark.

But a few years from now, who knows? By then, we may be out of Iraq and feeling much better about the whole thing. On the other hand, we may still be there and feeling worse. Someday we may recall this war in Iraq as the first phase of a larger conflict involving Iran and perhaps other Middle East countries. It seems clear that Iraq will either be Bush's greatest achievement or his downfall, but it’s also possible that we'll just go on arguing about which it is.

Back home, most would say that Bush's appointment of John Roberts as chief justice of the United States was a ten-strike: a conservative chief in the classic sense who will earn the respect of all but the most partisan.

Roberts may well put his stamp on an era measured in decades. But even that depends on how soon a conservative trend emerges in the court's rulings. The president's core backers want that trend to be visible immediately, and they are banking on Roberts and nominee Samuel Alito (still awaiting confirmation). But the true colors of high court justices can take years to show.

Some will recall 2005 as the year of lost opportunities. Will it get easier for the 109th Congress to amend Social Security next year? Surely not. What about the tax code and the immigration laws? It's not hard to imagine conservatives looking back in 2010 or 2015 and wishing they had made more progress on these perennial issues when they had the whip hand at both ends of Pennsylvania Avenue.

Will 2005 be remembered for the scandals that broke? There were notable indictments of major figures in Washington, to be sure, led by Tom DeLay (the former House Majority Leader) and I. Lewis "Scooter Libby (the former chief of staff to Vice President Dick Cheney). But for these stories to loom large in years to come, the revelations of 2005 will need to be followed by even bigger revelations and indictments in 2006.

Will the new year bring such news? We simply don't know yet. And that's what makes it so difficult to confine ourselves to reporting the present.