And now more on how interracial and multicultural relationships are perceived beyond the camera. Journalist Debra Dickerson addresses this very topic in many of her writings. She is the author of the book "The End of Blackness." She joins us now from WAMC in Albany, New York.

Debra, nice to have you on the show.

Ms. DEBRA DICKERSON (Author, "The End of Blackness"): Glad to be here.

COX: Also with us, Carmen Van Kerckhove, co-director of the New Demographic, a diversity training company that specializes in topics related to mixed-race identity and interracial relationships. She joins us from our NPR studios in New York City.

Carmen, nice to have you on as well.

Ms. CARMEN VAN KERCKHOVE (Co-director, The New Demographic): Thanks for having me.

COX: You both heard Dr. Boyd give his impression of this phenomenon, if we can put it that way. And you heard me ask him if art is imitating life. Do you think that people still get their eyebrows raised when it comes to seeing mixed-race couples? Debra, let's start with you.

Ms. DICKERSON: I think it depends. I got my eyebrows raised recently when I saw the movie "Family Stone." There is the main family, with Diane Keaton playing the matriarch; they had a deaf son, who's not only deaf but gay, and his husband--he had a black husband, so there were so many things going on there that I missed, like, the first three minutes of the movie trying to get my arms around it. So I think when the entertainment industry takes the time to be really interesting and--'cause you're wondering, `What am I focusing on here, the fact that this kid is deaf, the fact that he's gay or the fact that he's in a interracial relationship?' And it was so long-standing--the catalyst is the family comes together for Christmas--that there was so much going on, it defused sort of all those things, but at the same time, I think the entertainment industry gets it very, very wrong sometimes.

Recently I wrote--it came from the heart--a critique of the movie "Wedding Crashers," because there was this long montage of these guys who would crash these weddings just to pick up women and it was sort of an ode to multiculturalism. So there was Asian women, there was Hindu women with the bindis, the red dot in the middle of the forehead, the Jewish weddings, everything but a black wedding. And I just--there are just some times when I think it becomes really clear that we're still not totally comfortable.

Ms. VAN KERCKHOVE: Sure. Well, I think that we have to keep in mind that the reality is people are still very much opposed to these relationships in many parts of the country. About this time last year, the FBI started investigating a hate mail campaign that targeted prominent black men, like Tate Davis or Clarence Thomas, who were married to white women. There are constant cross burning incidents targeting interracial couples all over the country, even in Long Island, New York, this year, which is right in New York City's backyard. We don't really realize that there is still a lot of opposition. So I think the fact that we're seeing more representations in the media is definitely a positive thing.

COX: Let's follow up, Carmen, with the point that interracial dating through online services, Web sites, things of that sort are having an impact, is my understanding. First of all, is that true? And secondly, to what extent is the impact being felt?

Ms. VAN KERCKHOVE: I know that there are a number of Web sites that specialize in interracial dating, and I think that this is just a phenomenon of the Internet in general. I think the Internet allows people to sort of privately indulge in their sexual preferences. Whether their preferences are for plus-size women or redheads or, you know, Asian women, I think that at these sites, you'll find a pretty self-selecting group who are in it for specific reasons. And I would hate to think that these people represent interracial couples in general.

COX: Debra, from my understanding, you seem to suggest in your writings that for some African-Americans, particularly women, that freedom comes with marrying or entering into a relationship with someone outside the race. Why do you say that?

Ms. DICKERSON: Not necessarily freedom but companionship. I mean, it's unarguable that there is some sort of a war going on between black men and black women, especially professional black women. I mean, we all know that professional black women over the age of about 35, if you're not married yet, you're probably not going to unless you look outside the race. So it's not so much that I think it's freedom; it's companionship. I went through--I ended up marrying a white man after five years of not having a date. I was holding out for a black man. After five years, I said, `What am I proving? What am I proving by being alone?' So it wasn't freedom, it was companionship.

COX: Now are there generational differences because you mention the age 35 and you said that if you don't have, you know, somebody by that time, chances are you're not going to find somebody if you limit yourself along racial lines. So that suggests to me that there is a generational component to this. Carmen, do you see that?

Ms. VAN KERCKHOVE: You know, I think an argument can be made that the younger generation, I guess the hip-hop generation, if you want to call it that, is a little bit more open to where race is not such a big deal. People grow up with hip-hop, etc., but I definitely think that young people are more open to interracial relationships. I've done workshops at colleges, at predominantly white colleges where at the--when it comes time for a discussion, I pretty much assume that most people in the room probably haven't dated interracially. And I always find myself surprised at actually how many people--how many of these students have been or are in interracial relationships. So I think that there is a generational shift. And it's not--you know, I think we need to realize that interracial relationships are not just a black and white thing.

Ms. VAN KERCKHOVE: I think media representations have very much focused on not just black and white, but specifically black men with white women, that anytime the topic of interracial relationships is specifically discussed, that's the couple that's used to represent the topic. But in reality, African-Americans are among the least likely among people of color to enter interracial marriages.

COX: Well, our time is really short, it's under a minute, and, Debra, I wanted to bring this point to you. Along the lines of what Carmen was just discussing, even though the numbers, she says, for African-Americans in terms of interracial dating and marriage are really low, as an issue, it seems much higher. I've got about 30 seconds for you to respond to that.

Ms. DICKERSON: I think in the black community, there's no question that it's a hot-button issue. I think racism is involved, but I think there's also--on the part of African-American women, I think there's definitely a sense that we are considered the bottom of the heap. And it's--there's actually been--and we don't have enough time to get into it--but The Village Voice did an interesting study a couple of years ago about attitudes among black men and even black women who had incredibly negative attitudes toward black women.

COX: ...seconds to go. All right. Thank you very much. We're going to make it, it looks like. Journalist Debra Dickerson, author of the book "The End of Blackness," joining us from WAMC in Albany, New York, and Carmen Van Kerckhove is co-director of New Demographic. She joined us from our NPR studios in New York City. Thank you both, and have a good holiday.

COX: This is NPR News. 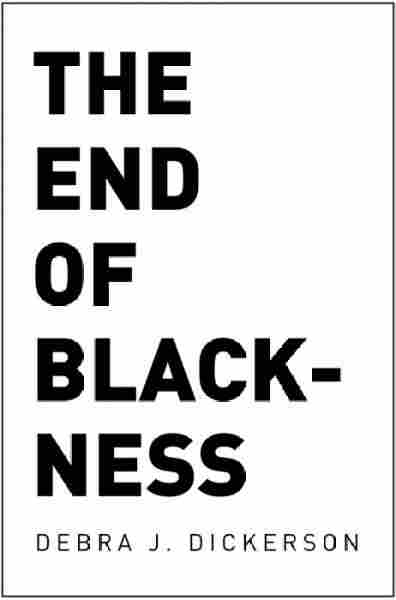 The End of Blackness

Returning the Souls of Black Folk to Their Rightful Owners

Title
The End of Blackness
Subtitle
Returning the Souls of Black Folk to Their Rightful Owners
Author
Debra J. Dickerson