Accessibility links
Windows: A Clear Danger to Birds No one knows what birds see when they look out at the world, but one ornithologist is sure they don't see glass. Daniel Klem estimates that at least 1 billion birds are killed by flying into windows every year in the United States. 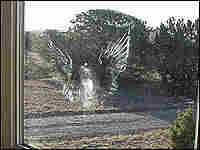 A print left behind by a bird flying into the window. Janie Johns hide caption 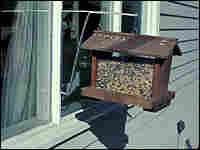 One way to help birds avoid window strikes is to place feeders close to windows -- the birds will stop at the feeder, or at least slow down. Courtesy Daniel Klem hide caption 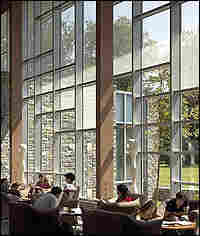 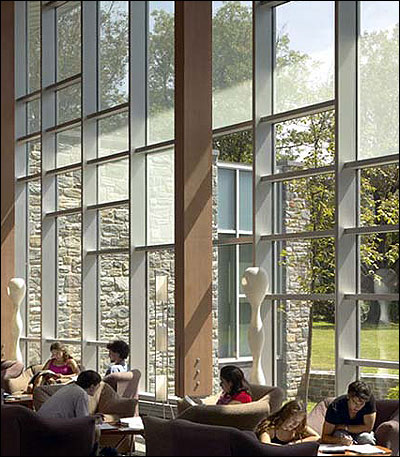 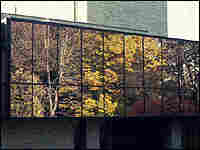 This window, reflecting the woods in front of it, is an example of how birds can be easily misled. Courtesy Daniel Klem hide caption

No one knows what birds see when they look out at the world, says ornithologist Daniel Klem, but he's sure they don't see glass. He estimates that at least 1 billion birds are killed by flying into windows every year in the United States.

"It's a very common phenomenon," said Klem. "Birds are deceived. They just don't see glass as a barrier and this is a problem for them."

Klem, a professor at Mulhenberg college in Allentown, Pa., first learned about the "window hit" problem 30 years ago from a teacher.

Klem responded by marching into a forest and hanging a bunch of windows from the branches of the trees. Then he sat down and watched what he calls an "appalling" number of collisions. Some birds lived. Many did not.

"I've learned very early on that a really short flight from an 8-foot perch can result in death," he said.

Later, Klem watched more than 100 birds hit the windows of a "typical" suburban home in the course of a single year. Then he studied shiny glass office towers, which can kill tens of thousands of birds in a year. It all adds up a yearly death toll of at least 1 billion, he argues, or roughly five percent of all the birds found in the United States each fall. Hardly anybody appreciates the size of the problem, he says.

"Nobody intentionally wants to see these birds harmed, and it's just so tragic to see this unintentional source of mortality being ignored," Klem said.

Attempts to find solutions to the window hit problem have been few and relatively modest, according to Klem. A major exception can be found on the campus of Swarthmore College. It recently agreed to turn a $71 million science center into an experiment, by using it to test a new kind of glass designed to ward off oncoming birds.

Julie Hagelin, an ornithologist at Swarthmore, says the college has known for years that it has a bird-hit problem. Hagelin is the unofficial keeper of bird carcasses found on campus.

"Typically they find them in the morning when they come to campus," she said. "They find a dead specimen, they wrap it up in whatever they happen to have, a napkin or a plastic bag, and they bring it to me and they say, 'We hear that you're supposed to do something with these.' "

Inside her lab, a big metal cabinet holds a long line of bird corpses, ranging from migratory birds like the northern parula to local birds such as woodpeckers.

Many birds killed by windows get eaten by cats and other scavengers, she says. But even when there isn't any carcass it's possible to tell when there's been a collision. Most birds leave a distinctive smudge mark on the window.

In the mid-'90s, when Swarthmore decided to build a new science center on campus, it briefly seemed like those window marks were about to get a lot more common. The center featured a three-story meeting room made out of clear glass -- an "avian slaughterhouse," says Klem.

Alarmed ornithologists invited Klem to speak to the building committee. Carr Everbach, a member of Swarthmore's engineering faculty, says that speech and an unfortunate encounter with a bird helped change the building plan.

"We were about to have a meeting to talk about the problems of birds striking the windows," said Everbach, "and we heard a loud thump and we turned around and there was a bird flopping around on the pavement just outside the window."

The building committee agreed to pay for bird-friendly glass, if Klem and Everbach could come up with a design. The challenge was to find a kind of glass that birds could see and people could see through.

Everbach and Klem recommended using so-called "fritted" glass. It's etched with closely spaced rows of small circles. When standing right in front of it, the glass is hard to see through, but Everbach says from a slight distance, the dots don't obscure vision that much.

To find out whether the fritted glass is really bird friendly, Everbach outfitted some of the windows with video sensors, called "thumpers."

The thumpers have recorded just two bird hits since the center was finished five years ago, which doesn't prove anything conclusively, since the sensors aren't attached to every window. But Everbach says it's a pretty good hint that the fritted glass is working.

Everbach's dream is that one day a glass manufacturer will start selling bird-friendly glass, just as the fishing industry now sells cans of so-called "dolphin-safe" tuna.

If nothing changes, Klem says it's certain that the problem of window hits will escalate. He notes that in the next few decades, millions of new homes and offices will be built in the United States alone.