Accessibility links
Archives Help Businesses Learn from Mistakes The documents, products and records a company keeps in its archive help it to create institutional memories -- good and bad. Nike turns to shoes in its archives to be reminded of past successes and failures. 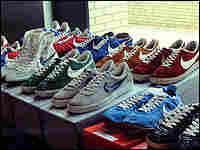 Nike recently bought 143 pairs of shoes from a collector in Japan to fill in holes in its archive. Courtesy Nike Archives hide caption 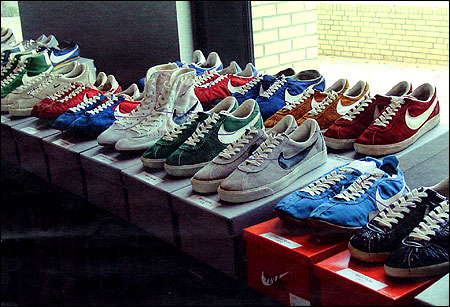 Nike recently bought 143 pairs of shoes from a collector in Japan to fill in holes in its archive.

Nike wants to build an archive containing a pair of shoes from every model it's ever made. The company is asking the public to contact Nike if they have one of the models on Nike's wish list. 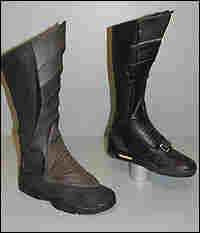 The Texaco Star Theater was a Tuesday night TV staple from 1948 to 1954. Chevron Corp. hide caption

The Texaco commercial and movie clip are copyrighted by Chevron Corporation and used with permission. Do not reproduce, copy and/or download.

Public museums were founded in part to help societies hold onto their cultural and historical memories. But businesses collect, too: The documents, products and records a company keeps in its archive help create institutional memories. Sometimes those memories are of products that worked, sometimes not.

The Texaco Star Theater was a Tuesday night TV staple from 1948 to 1954. Each week four men in crisp matching gas station uniforms sang their jingle and introduced the show's star: Milton Berle.

Berle's show was one of the most popular on TV at the time and Texaco reaped the rewards. Over the years, the company also linked its petroleum products to aviation daredevils, movie stars, and even radio broadcasts of the Metropolitan Opera.

For years, Texaco kept these clips and other corporate records in its archive in New York. But in 2001, Texaco merged with the Chevron Corporation in California -- and the archives of both century-old companies were combined.

The commingled archive is located eight miles from Chevron's headquarters. In an unmarked building in a non-descript office park, boxes are stacked in rows 35 feet high, almost to the ceiling.

In among millions of photographs, documents and artifacts are the contents of a corporate time capsule and a stash of service station give-away items.

John Harper, who oversees the archive, also discovered a rare 1939 short film made for Chevron's predecessor -- Standard Oil Company of California -- by Walt Disney. The film features a parade of cartoon characters -- including the Three Little Pigs and the Big Bad Wolf.

The film touted a new marketing campaign and was shown only to oil company staff and service station owners. Staff can still see it. And it can still be useful, says Christina Fong, an assistant professor in the business school at the University of Washington in Seattle.

"Companies that can really leverage from the information stored in their archives can do things like prevent past mistakes and use older ideas," says Fong. "Those types of things can really help them to succeed in the marketplace."

That's how Nike designers say they use the 23,000 pieces of sports memorabilia at the company's Beaverton, Ore., campus, where Cindy Romaine is corporate archivist.

"It's like, why do we read the Constitution of the United States?" she says, "because if we can tap into what that thinking was we're a lot further in our current situation trying to solve the problems of today."

Comparing Nike's collection of running shoes to the U.S. Constitution is a bit of stretch. Still, Romaine says Nike designers often visit the collection for inspiration. The boots Nike designed for the first Batman movie are here, as is the extra large baseball uniform -- and jock strap -- the company created for John Candy to wear in the 1985 sports movie Brewster's Millions. Today 143 pairs of shoes from the 1970s and '80s are laid out on 10 long folding tables. They were purchased recently from a collector in Japan to fill holes in the archive.

Nike's goal is to collect at least one of every item Nike has produced. There are still about 50 models missing. Romaine hopes folks will check their closet floors for old sneakers that might have stories to share with today's Nike designers.