Accessibility links
A 'Great Big' Biography of Tommy Dorsey A major big band leader is the subject of a new book: Tommy Dorsey: Livin' in a Great Big Way. With his brother Jimmy, Dorsey helped define American popular music from the 1920s through the mid 1950s. Peter Levinson tells Linda Wertheimer about his biography.

A major big band leader is the subject of a new book: Tommy Dorsey: Livin' in a Great Big Way. With his brother Jimmy, Dorsey helped define American popular music from the 1920s through the mid 1950s. Peter Levinson tells Linda Wertheimer about his biography. 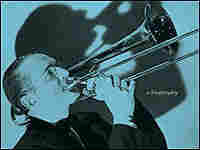 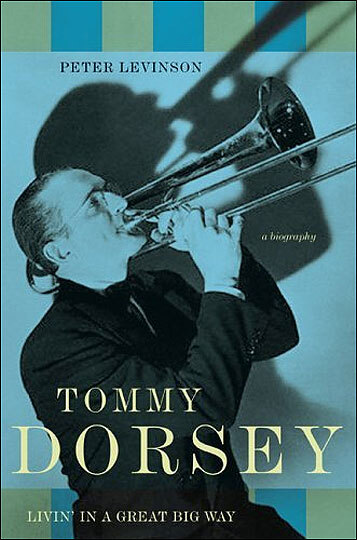 You're listening to Tommy Dorsey and his orchestra. The long, lyrical phrases and the sweet high notes that he could coax from a slide trombone influenced a generation of performers. With his brother, Jimmy, who played all sorts of saxophones, he defined American popular music from the '20s all the way to the '50s. We have a new biography, "Tommy Dorsey: Livin' in a Great Big Way." Peter Levinson wrote the book and he joins us from NPR West.

Mr. PETER LEVINSON (Author, "Tommy Dorsey: Livin' in a Great Big Way"): Thank you, Linda. It's a pleasure to be with you.

WERTHEIMER: Tommy Dorsey came out of a sort of tradition in Pennsylvania where everybody would get together and dance. But was the Dorsey band a dance band? Was it a concert band? I mean, were people supposed to watch a performance and listen to the music, or were they supposed to get out and dance?

Mr. LEVINSON: It was fundamentally a dance band. His first two hits, of course, were "Marie" and "Song of India."

Mr. LEVINSON: That was in 1937. And then it became kind of a very pedestrian-sounding band. He would copy arrangements of other bands and stuff like that and it wasn't very distinctive. And then a very important man came into his life in the person of Sy Oliver, who completely transformed the Tommy Dorsey Band, and then it became kind of a--let's call it a quasi-jazz orchestra with great singers, of course. But fundamentally, it was always a dance band.

WERTHEIMER: Now in the first part of the book, you write about all the other famous musicians that the Dorseys worked with: the Lannons(ph), Vic Spyderbach(ph), Paul Whiteman, Bing Crosby. How did Tommy Dorsey arrive at a sound?

Mr. LEVINSON: It was a combination of things. I wouldn't say that Tommy Dorsey had a precise sound, but it was a real, very clean, driving sound. He had the right brass section. The reed sound was very strong, and then, of course, on ballads, his trombone was just par excellence.

WERTHEIMER: You want to pick a good example? You pick a track and we'll play a few bars.

Mr. LEVINSON: Well, I think "Opus No. 1," which came out in 1944 right after the recording ban, and it was such a successful song on radio. Actually it was released just at the time that MacArthur was going ashore in Leyte, and the Americans had crossed the Rhine, so it really described what was happening in the war at the time.

WERTHEIMER: Tommy Dorsey was the younger one.

Mr. LEVINSON: That's right. And most people think he was the older...

Mr. LEVINSON: ...because he was so strong and authoritative and irascible.

WERTHEIMER: What was the relationship between these two men?

Mr. LEVINSON: Well, it was a very complicated, very Irish kind of thing, very close as brothers, and yet feuding and fighting, and when I say fighting, I mean, fistfighting, often. And if anyone came to separate the two, then the two brothers would fight that person. It was their own fight. No one else was supposed to get in between them at any time. There was a great respect, a great love, but also a great jealousy. Tommy, obviously, was the more assertive of the two brothers. Jimmy, who had a drinking problem his whole life, was jealous because though they were co-leaders, Jimmy always sat in the saxophone section and Tommy was always out in front and he took care of all the business. He knew he couldn't do that.

WERTHEIMER: Now Tommy and Jimmy Dorsey split up at one point.

WERTHEIMER: What was that about?

Mr. LEVINSON: Well, Tommy and Jimmy had their own band, called the Dorsey Brothers, starting in 1928, and it was essentially a recording band, and Bing Crosby, among others, recorded with them. By the end of 1934, Tommy felt `Let's get out on the road; we can really make something of this.' And they were touring, and they were doing extremely well, and they were set for a very important summertime engagement, starting Memorial Day weekend, and during the first day, the band was playing a tune called, "I'll Never Say Never Again, Again." Jimmy said to Tommy, `That tempo's a little wrong.' And Tommy said, `You don't like it? It's yours.' And he just picked up his trombone and left.

WERTHEIMER: They reunited in the '50s, right?

WERTHEIMER: When Tommy Dorsey's band was at its height, it had some of the most famous musicians around playing and singing, and notably young Frank Sinatra...

WERTHEIMER: ...who appears to have had a tumultuous relationship with Tommy Dorsey but to have learned a great deal from him.

Mr. LEVINSON: Yes. There's a key quote that I got from Vince Falcone, who played piano for Sinatra during the '70s and later in the '80s, and who said to me, `You know, Frank said, "The two most important people in my life have been my mother and Tommy Dorsey."' He learned everything about phrasing and about breathing. Frank said, `Dorsey would be in front of me, and I could watch the back of his jacket and I couldn't see him breathe.' Of course what Dorsey did, he devised a certain way of breathing such that he could take air in on the left side, let's say, and let it out on the right, and the average person couldn't see him do that. But he saw that he would play these very long phrases without seemingly able to breathe. But of course he was breathing, and that's the way that he learned to sing, in other words, long phrases.

Mr. FRANK SINATRA: (Singing) What good would it do?

Mr. SINATRA: (Singing) For tears would fill my eyes, my heart would realize that our romance is through...

WERTHEIMER: One of the things that Tommy Dorsey did was tie Sinatra down to a terrible contract, in which he basically owned a piece of Frank Sinatra.

WERTHEIMER: Did Sinatra ever get out of that?

Mr. LEVINSON: He did, but it cost him $60,000, and then of course the whole famous line from "The Godfather": He made him an offer he couldn't refuse. By that I mean that La Cosa Nostra was very close to Frank Sinatra, and they threatened Dorsey on a couple of occasions and that's why the line in Mario Puzo's book was `He made him an offer he couldn't refuse,' which was fictionalizing what happened, which in the book, the singer, Johnny Fontane, is let out of his contract by this devious band leader by the threat of the mafioso who put a gun to his head. Apparently that happened with Dorsey as well.

WERTHEIMER: He was a complicated man. I mean...

WERTHEIMER: ...he drank too much, he was a womanizer, he was very suspicious of his own wife while he was cheating on her.

WERTHEIMER: I mean, there are many things not to like about Tommy Dorsey in this book.

Mr. LEVINSON: But he also had tremendous charm and he also could take care of people. For instance, there--the instance where he fired Bunny Berrigan, not once but two different times, and yet financed his band. And then when Bunny Berrigan was dying, he sat by his bed in the last two days of his life, paid for his funeral and sent money along with Harry James to set up a trust fund for his children.

Mr. LEVINSON: Absolutely. That's one of the main features of his career. He could spot talent in anybody or anything.

WERTHEIMER: And he invited Elvis Presley to be...

WERTHEIMER: And I understand that he told the members of his band, who were making great fun of Elvis Presley, that this kid was going to be one of the biggest stars of all time.

Mr. LEVINSON: He could see it. He might not have liked what he saw, but he saw talent and he saw there was going to be an amazing future for this guy.

(Soundbite of performance by Elvis Presley)

Mr. ELVIS PRESLEY: Thank you very much, ladies and gentlemen. And now a little song that I have on record, on RCA Victor, entitled "Heartbreak Hotel."

Mr. LEVINSON: It was a shocking experience. You saw a change in the music happen right that night. I think it's more important than when The Beatles came to Ed Sullivan, because there--Elvis Presley started, really, rock 'n' roll in a big way with that telecast of January '56.

WERTHEIMER: Now speaking of Ed Sullivan, he generally gets the credit for introducing Elvis.

WERTHEIMER: So the appearance on Dorsey's show predated Ed Sullivan by how much?

Mr. LEVINSON: Well, the first of six dates on "Stage Show" on CBS was January to April, '56. I believe Steve Allen presented him in June, and then Ed Sullivan had him for four dates in August. And of course, that was the time when he wouldn't permit his cameramen to shoot him below the waist.

WERTHEIMER: Tommy Dorsey died shortly after the end of that television program.

Mr. LEVINSON: Well, he died in November of '56, exactly one week after his 51st birthday. He essentially suffocated from a combination of red wine, veal Parmesan, steak and uppers, because he used to take uppers a great deal in his last years. It's almost, you would say, coincidental, in a sense, apt, that he would die in that year, because that's the year the music abruptly changed.

Mr. Levinson, thank you very much.

WERTHEIMER: This is WEEKEND EDITION. Scott Simon is back next week. I'm Linda Wertheimer.

Turning to the Trombone for Tranquility July 14, 2005