And now, from art on the skin to beauty of hair design. Dyed, fried or to the side, naturally nappy or Condoleezza-curled, black women's hair makes a statement. Recently I talked with photographer Michael Cunningham and writer George Alexander about how they selected the women featured in their new book "Queens: Portraits of Black Women and Their Fabulous Hair."

Mr. MICHAEL CUNNINGHAM (Photographer): Some came from hair shows. George and I were fortunate to travel to west Africa and met some beautiful women there who just shared their traditional hairstyles and opened up their world to us. We also were able to go to a fashion--a hair show--excuse me--in London, and here in America, we went to salons in Washington, DC, and also in New York City, and we asked friends to recommend women to us which we thought would give us a great story and also had a unique hairstyle. And it just worked out.

CHIDEYA: George, what were some of the favorite interviews that you did during working on this book?

Mr. GEORGE ALEXANDER (Author): One of my favorites would be the cover, Latiz Grahams(ph), 82-year-old woman who's a swimmer. She started swimming at 64, and she inspires me because she does yoga I think every day and is full of life.

CHIDEYA: She looks fantastic. She's got this silver hair tied up in twists and tendrils and big gorgeous earrings on. And a lot of the women in the book you made look very regal. Was this, Michael, a process of taking people and posing them or finding them where they were or some kind of mixture?

Mr. CUNNINGHAM: When I think of these women, I think of royalty, and I think of strength and power, and so it was very easy. And I'll just piggy-back a minute and tell you about two images that I really like, and I believe they're next to each other in the book. One is Harriet O'Day(ph), who I photographed in Ghana, which is on a page right near Theresa Garbett(ph), who I photographed in Atlanta. And if you look at the two hairstyles, you really can't tell which one was taken in Africa and which one was taken in America. And that shows, to me, the beauty and the connection of these women and how it transcends and how a lot of the African women wanted to emulate American women, and a lot of the American women were emulating African women without even knowing it.

CHIDEYA: One of my favorite pictures is of three tough-looking sisters saying--and this is their quote: "I set my hair money aside like it's a bill, if you want to know the truth. It's like paying the phone bill, the electricity bill, the gas bill. I don't play about my hair." It's a great picture and, like, a great sentiment. Did you find that people sometimes spent ridiculous amounts of money keeping their hair up?

Mr. ALEXANDER: Absolutely. It's amazing the amounts of money and the amount of time, and if you look at that portrait of those three women, you'd have to think the lack of sleep because how does one sleep when your hair is stacked like that?

CHIDEYA: How do you?

Mr. ALEXANDER: It's so beautiful.

CHIDEYA: Yeah, they have hair that looks like fancy hotel curtains. It's like, they'll have it in so many levels of draped. But you know, you've got--it's like, that's the whole thing. You have a lot of unique styles in here. One of my other favorite portraits is two London-born Nigerian sisters with Afros, like, from back in the day.

CHIDEYA: Completely enormous. And one more thing I just want to talk about in the context of a specific photo but also in general, you have a photo of a woman with a Mohawk, and her whole section in the book talks about how everybody projects their stuff onto her hair, including her mother, who just is not down with it at all. Is that a common theme that you picked up, people--hair becoming an issue in families and so on?

Mr. ALEXANDER: Absolutely. It's part of, I guess, the journey--the relationship between parents and children. But with the women in the book, there were several who talked about choosing a style that did not meet a parent's expectations, whether it be Angela Williams(ph), who had locks and her mother didn't approve of those, and then she had the Mohawk and just shocking her mother every turn. But then you had some women who luckily had parents who sort of had broader boundaries when it came to self-expression, like Shannon Erris(ph), who's a stylist, oh, and she's a salon owner who lives in Harlem, had natural hair as a child, and her mother encouraged that, and now she has locks herself.

CHIDEYA: George and then Michael, just give me your reflection on what you want this book to do as you launch it into the world.

Mr. ALEXANDER: I'd like this book to really give black women something to celebrate themselves in which they should walk away with lot of pride about the diversity of their beauty and the diversity of their hair as something that--I think when a black woman comes into the world, hair is something that is discussed in her life very early on. And I think hopefully some women who've had hair issues that have caused a lot of pain could begin a healing process around hair. But ultimately a major celebration about who they are as women.

Mr. CUNNINGHAM: We do want the world to look at this book and celebrate with these women not only the fact that they have come out to be a part of this book, but they've come out and they've opened themselves up and shared a part of their lives that--you know, it's personal. Their hair is very personal to them, and they allowed George and I to uncover that and to document their stories. We just want the world to know that, that they're beautiful, they're proud, they're strong and we just love them.

CHIDEYA: Well, on that note, I will let you gentlemen go. Michael Cunningham and George Alexander are co-authors of "Queens: Portraits of Black Women and Their Fabulous Hair." Thank you so much for joining us.

Mr. CUNNINGHAM: Thanks for having us.

CHIDEYA: That's our program for today.

To listen to the show, visit npr.org. NEWS & NOTES was created by NPR News and the African-American Public Radio Consortium.

I'm Farai Chideya. Ed Gordon will be back tomorrow. This is NEWS & NOTES. 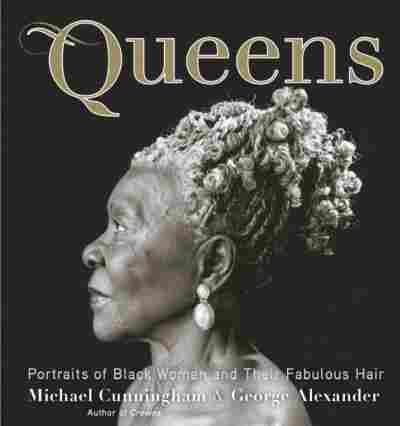 Portraits Of Black Women And Their Fabulous Hair

by Michael Cunningham and George Alexander