Accessibility links
Judging Alito: The Gang of 14 Factor The prospects of Judge Samuel Alito winning confirmation to the U.S. Supreme Court will probably rest with a group of senators known as the Gang of 14. Political Editor Ken Rudin looks at the group of seven Republican and seven Democratic senators who forged a Senate deal on judicial filibusters.

Judging Alito: The Gang of 14 Factor

Judging Alito: The Gang of 14 Factor 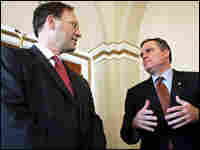 Judge Samuel Alito (left) meets with Sen. Mark Pryor (R-AR) on Capitol Hill, Nov. 3, 2005. Pryor is part of the Gang of 14, a group of senators who may play a pivotal role in deciding whether Alito's nomination to the high court is filibustered. Joe Raedle /Getty Images News hide caption

The prospects of Judge Samuel Alito winning confirmation to the U.S. Supreme Court will probably rest with a group of senators known as the Gang of 14. That's the group of seven Republican and seven Democratic (mostly pragmatic) senators who kept the Senate from plunging into a battle over the role of the filibuster last year. They may also hold the key to keeping the Senate from falling into acrimony over another judicial filibuster regarding Judge Alito.

The group formed last year after Senate Majority Leader Bill Frist warned of a stiff response if Democrats continued to block up-or-down votes on some of President Bush's judicial nominees. Frist vowed to unleash what became known as the "nuclear option," which would curtail the ability of the minority to filibuster. The issue, which went on for months, threatened to end what little comity there had been between the two parties.

At the last moment, 14 senators came together and defused what would have been a historical blowup. Under the agreement, the seven Republicans said they would not support Frist's "nuclear option." The seven Democrats agreed to no longer block three previously filibustered Bush nominees and pledged to consider the filibuster of future nominees only under "extreme circumstances." (The phrase "extreme circumstances" was never defined.)

John Roberts easily survived the process: Only 22 of the Senate's 44 Democrats -- and none of the Republicans -- voted against his confirmation as chief justice. In part, that's because Roberts had little in the way of a "paper trail" that his opponents could use to warrant a filibuster. Samuel Alito is different. He has a far more voluminous record on a score of issues, including but not limited to abortion. So some Democrats are openly discussing the possibility of a filibuster. And once again, attention is on the Gang of 14 and their role in Alito's chances for confirmation.

Some observers have characterized the 14 as moderates. But that's not exactly accurate. On the Republican side, it would be fair to call Maine's Olympia Snowe and Susan Collins moderates. But Lincoln Chafee of Rhode Island is as close to a Republican liberal as you could find. And while Mike DeWine of Ohio is considered a moderate conservative, John McCain (AZ), John Warner (VA) and Lindsey Graham (SC) are reliable conservatives on most issues. Nearly all the Democrats in the group, however, are considered moderates: Ben Nelson (NE), Mark Pryor (AR), Joseph Lieberman (CT), Mary Landrieu (LA) and Ken Salazar (CO). Hawaii's Daniel Inouye, though, is a liberal. And for the most part, Robert Byrd -- the senior member of the Senate -- is beyond ideological categorization.

One thing that most of the 14 senators may have in common is a maverick streak -- a willingness, at times, to put partisanship aside and work for a compromise. And that's what brought the "Gang of 14" together. Here is a snapshot look at the group:

Collins has been the target of advocacy groups from the left and the right regarding judicial nominations. She is a pro-choice moderate Republican, and she has expressed concern about Alito's votes on abortion. But she also says she sees no grounds for a filibuster.

Perhaps the most liberal of any Senate Republican, Chafee has a history of voting against the GOP leadership — which is almost a no-brainer in an overwhelmingly Democratic state. He is among the most vulnerable Senate incumbents up for re-election this year. Even before he gets to the general election, Chafee is facing a strong challenge from the right in the September primary.

DeWine's participation in the group has not been much of a help back home. Conservatives who were pushing for the "nuclear option" are now talking about finding a candidate to challenge DeWine in the May GOP primary. DeWine's son lost in last June's special congressional primary in southwest Ohio; one of the reasons given for his defeat was the senior DeWine's support for the judicial compromise. The Ohio Republican Party has been rocked by scandal over the past year or so, and many in the state GOP on the ballot in 2006 — including DeWine — could find themselves in trouble. As for the Alito nomination, DeWine has said it does not "qualify for filibuster material." He has said he would support the nuclear option if the Democrats decided to hold up the nomination.

A conservative, Graham is willing to criticize his party elders and reach out to Democrats, which reminds many of John McCain, whom he endorsed for president in 2000. Graham and DeWine are the only members of the Gang of 14 who are on the Senate Judiciary Committee. Like DeWine, Graham has said the Alito nomination does not warrant a filibuster.

McCain's determined effort to work with Democrats in forging compromises may be one of the reasons he is not especially popular with GOP leaders, including Senate Majority Leader Bill Frist. The once-and-likely-future presidential candidate is a media favorite whose pronouncements always receive maximum attention. But as one prominent conservative said, "liberals and media types" don't vote in Republican primaries; Republicans do.

Some view McCain's participation in the Gang of 14 as a "betrayal" that they plan to use against him during his likely presidential bid in 2008. While he has long been looked on nervously by Bush supporters, McCain is wildly popular at home, having won won a fourth term in 2004 with 77 percent of the vote. McCain has described Alito's record as "one of a thoroughly experienced, capable and principled jurist and lawyer who has dedicated his professional life to public service."

Snowe was one of the most vocal opponents of limiting the right to filibuster, declaring that if it came to a vote, she would side with the Democrats. She is a pro-choice moderate who voted for John Roberts (as did every other Republican). Snowe is up for re-election this year.

Warner is much closer to Senate Majority Leader Bill Frist than McCain is, but he never supported the move to make it more difficult to mount a filibuster. He worked especially close with Sen. Robert Byrd (D-WV), another Gang of 14 member, to work out the compromise. A leading Senate figure in the decision to publicize the Abu Ghraib prison abuse scandal, Warner has said he hopes the group will play a "pivotal" role in the Alito confirmation process.

In arguing against the nuclear option, Byrd saw himself as a guardian of Senate procedure and custom. But some Republicans say that as majority leader in the 1970s and '80s, Byrd also changed rules to suit himself and his party. Still, John Warner credits Byrd's participation as one reason why the compromise came about. Byrd voted to confirm Roberts. First elected to the Senate in 1958, Byrd is seeking a ninth term this year; he is unlikely to work up a sweat in winning it.

Inouye was the only member of the group to vote against John Roberts for chief justice. Most media reports indicate that Inouye has not had much of an influence among the 14; there has been speculation that he was added to the group at the last minute in order to make sure there was an equal number of Democrats and Republicans.

Within days after the Gang of 14 announcement reaching a compromise on judicial nominees, Landrieu and Byrd were the only Democrats to vote to confirm the previously filibustered Priscilla Owen to the U.S. Court of Appeals. Landrieu narrowly won re-election in 2002 and has charted a fairly moderate course in the Senate. She voted to confirm Roberts.

Lieberman has a history of showing a willingness to reach across the aisle and work on compromises with Republicans; that's one reason why Al Gore picked him as his running mate in 2000. Lieberman continued that tradition by voting to confirm Roberts to the Supreme Court. But lately, this willingness has alienated many of his fellow Democrats — especially concerning his endorsement of President Bush's handling of the Iraq war. Some in Connecticut are talking about finding a liberal challenger in the Democratic primary this year, when Lieberman runs for a fourth term.

As one who is philosophically opposed to the filibustering of judicial nominees, Nelson was the leading Democrat pushing for a compromise from the start. Not long after the compromise was reached, Nelson was the lone Democrat to vote to confirm Janice Rogers Brown to the U.S. Court of Appeals; Brown had been one of the judges whose confirmation was held up by a filibuster. Nelson also voted to confirm John Roberts to the Supreme Court. A conservative Democrat in a very conservative Republican state, Nelson has scared away most top GOP challengers in his bid for a second term this year.

Pryor seems to be following the same centrist path as his father, David, who represented Arkansas in the Senate for 18 years and was known for his moderate voting record. When Mark Pryor was elected in 2002 — by defeating Republican incumbent Tim Hutchinson — he was somewhat vague on the issues. But he has since cast his lot against gun control and certain abortion measures. Pryor voted to confirm Roberts.

During his 2004 campaign, when he won his first Senate term, Salazar criticized his fellow Democrats for holding up Bush's judicial nominees. Salazar voted to confirm Roberts. Like his Republican colleague Snowe, Salazar said he was concerned about Roberts' rulings (particularly regarding affirmative action) but saw no reason for a filibuster.