Accessibility links
Lobbyist Abramoff Reaches Deal with Prosecutors Powerful lobbyist Jack Abramoff has reached a deal with federal prosecutors investigating his wide-ranging influence on Capitol Hill. Abramoff pleaded guilty to criminal charges involving the purchase of a fleet of gambling boats in Florida, and is also cooperating in federal investigations of lawmakers who allegedly received favors from him or his clients. 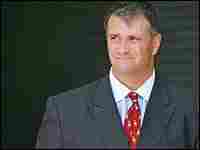 "Words will not ever be able to express my sorrow and my profound regret for all my actions and mistakes," Abramoff said when he rose to address the judge. "I hope I can merit forgiveness from the Almighty and those I've wronged or caused to suffer."

Abramoff faces 30 years in prison and is expected to cooperate in the wide-ranging corruption investigation believed to be focusing on as many as 20 members of Congress and aides.

To each of the three charges, Abramoff said, "I plead guilty, your honor."

U.S. District Court Judge Ellen Huvelle and lawyers in the case referred to restitution possibly reaching $25 million in the case.