Listen
Kiran Desai and 'The Inheritance of Loss'

Kiran Desai is the daughter of well-known novelist Anita Desai. But she is quickly making a name for herself. Alan Cheuse reviews Desai's latest novel, The Inheritance of Loss, a novel that takes place in both New York City and northeastern India.

Kiran Desai is the daughter of well-known novelist Anita Desai, and she's rapidly becoming well-known in her own right. Her first novel, "Hullabaloo in the Guava Orchard," won lots of praise. Her second novel, "The Inheritance of Loss," has just appeared. Our reviewer Alan Cheuse says it's even better than the first.

One major strand in this beautifully composed novel follows the New York City adventures of Biju, an immigrant worker from northeastern India. The second narrative strand takes us to Biju's home territory, the district of Kalimpong, where his father works as a cook for a retired British-educated Indian magistrate and the judge's inquisitive granddaughter Sai. The judge is a bit of a prissy old fellow, immersed in his love for his pet dog. But granddaughter Sai is a glorious teen-ager, in love with the world around her and in love with reading, reading faster and faster until, as Desai tells us, `She was inside the narrative and the narrative inside her, the pages going by so fast, her heart in her chest, she couldn't stop.'

While Sai immerses herself in her books, we get a look at the world around her, where indigenous Nepalese exiles, the cheap labor of the region, rise up to call for an independent state within a state. One of these young rebels is a handsome young fellow named Gyan who happens to be the science tutor of young Sai and the first great love of her life, though he abandons her rather rudely for the burgeoning political movement.

Fortunately for us, Kiran Desai is wildly in love with the vital landscape and all the characters who inhabit it. Even when immigrant worker Biju calls home from New York City, we can smell the humid air over the telephone line; we can picture the green-black lushness, the plumage of banana, as Desai writes, `the stark spear of the cactus, the delicate gestures of ferns. He could hear the croak, terr-wonk, wi-wi-butuk-butuk(ph) of frogs in the spinach, the rising note welding imperceptibly with the evening.'

This story of exiles at home and abroad, of families broken and fixed, of love both bitter and bittersweet--you can read it almost as Sai read her Bronte, with your heart in your chest, inside the narrative and the narrative inside you.

NORRIS: The book is "The Inheritance of Loss" by Kiran Desai. Our reviewer, Alan Cheuse, teaches writing at George Mason University in Fairfax, Virginia. 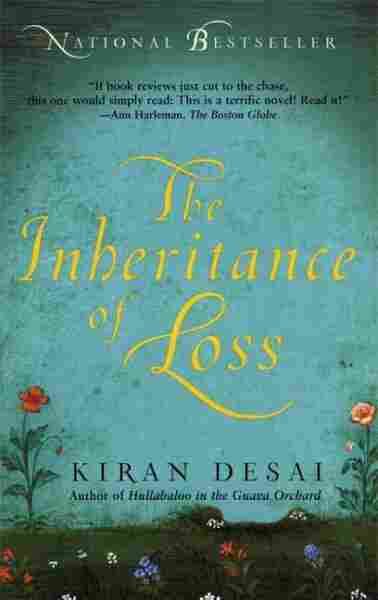 The Inheritance of Loss