Accessibility links
Women's March On Washington Goes Global: Postcards From Protests Around World : The Two-Way Boston, San Francisco, London, Sydney — D.C.'s massive protest has spawned sister marches in all 50 states and hundreds of cities across seven continents. Here's a glimpse of some of the biggest.

1:25
Women's Marches Go Global: Postcards From Protests Around The World 1:25

As the Women's March on Washington has swelled in support, attracting attention and supporters in the lead-up to Saturday's demonstrations, its name has become something of a misnomer.

Sister marches have been organized in all 50 states, several U.S. territories and countries around the world. They have tried to express solidarity with the aims of the original march: opposition to President Trump's agenda, and support of women's rights and human rights in general.

Given the quirks of time zones, many of those marches kicked off before the event that inspired them. In Sydney, London, New Delhi, and other cities, demonstrators broke out their signs and pink hats before even their compatriots in D.C. could.

Straight from NPR and member station reporters on the ground: Here's a glimpse of the marches Saturday — across the country, and around the world. 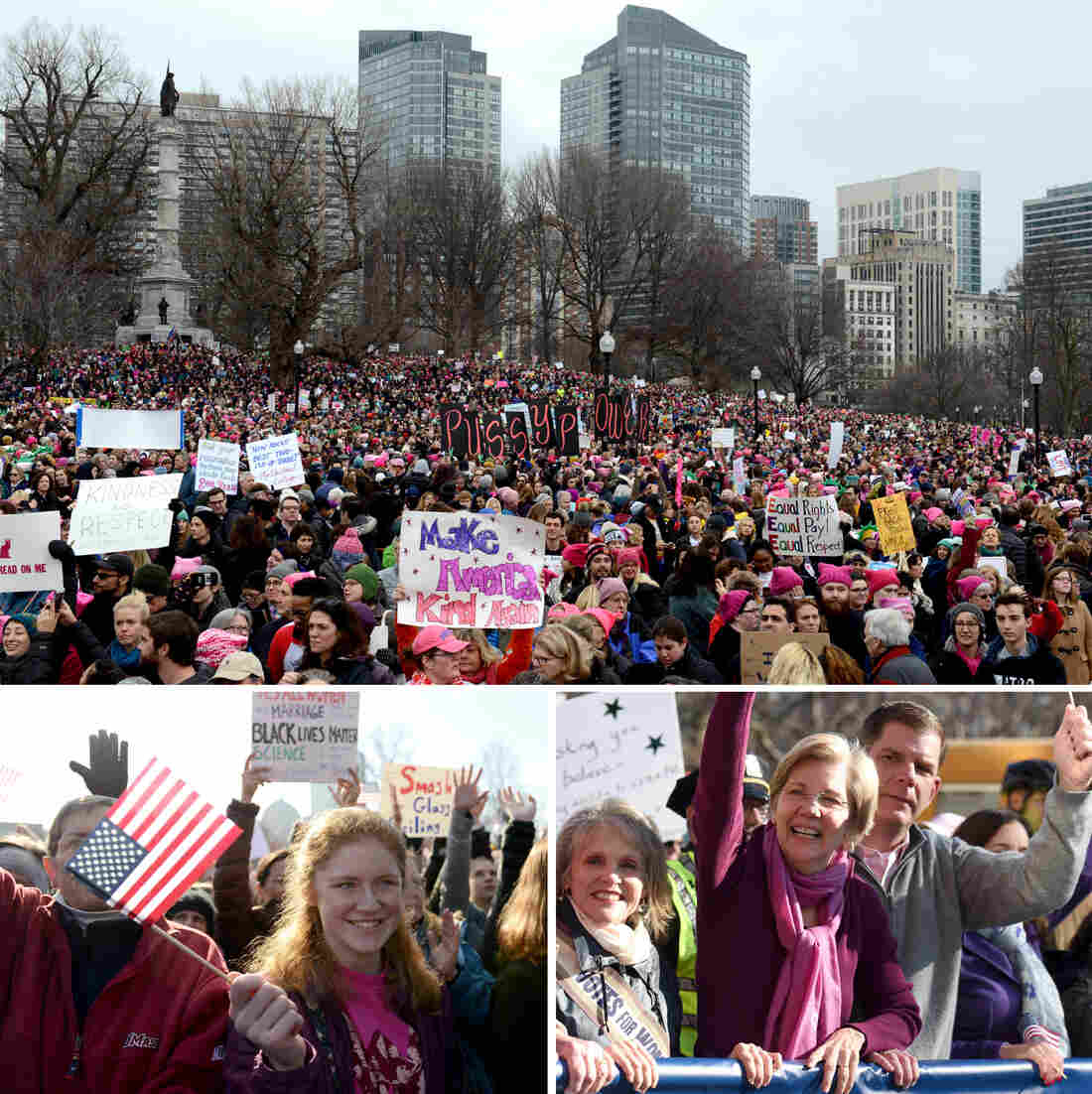 "It is shoulder to shoulder" in Boston Common, WBUR's Deborah Becker tells Scott Simon on Weekend Edition Saturday. She describes the rally there as a "sea of pink," referring to the pink knit caps that have become distinctive of the Women's March on Washington.

The caps have come to be known as "pussyhats," in reference to a tape in which Trump bragged about assaulting women by grabbing their genitals.

Deborah reports that the message of the Boston protesters is one of solidarity with the primary march in Washington. They bear signs not only protesting Trump, but supporting a range of issues — from climate science to women's access to abortion and birth control.

Both Massachusetts senators, Elizabeth Warren and Ed Markey, addressed the rally in Boston.

"I'm here to fight back!" Warren told the crowd. "We are in marches to say we are fighting back. That's who we are." 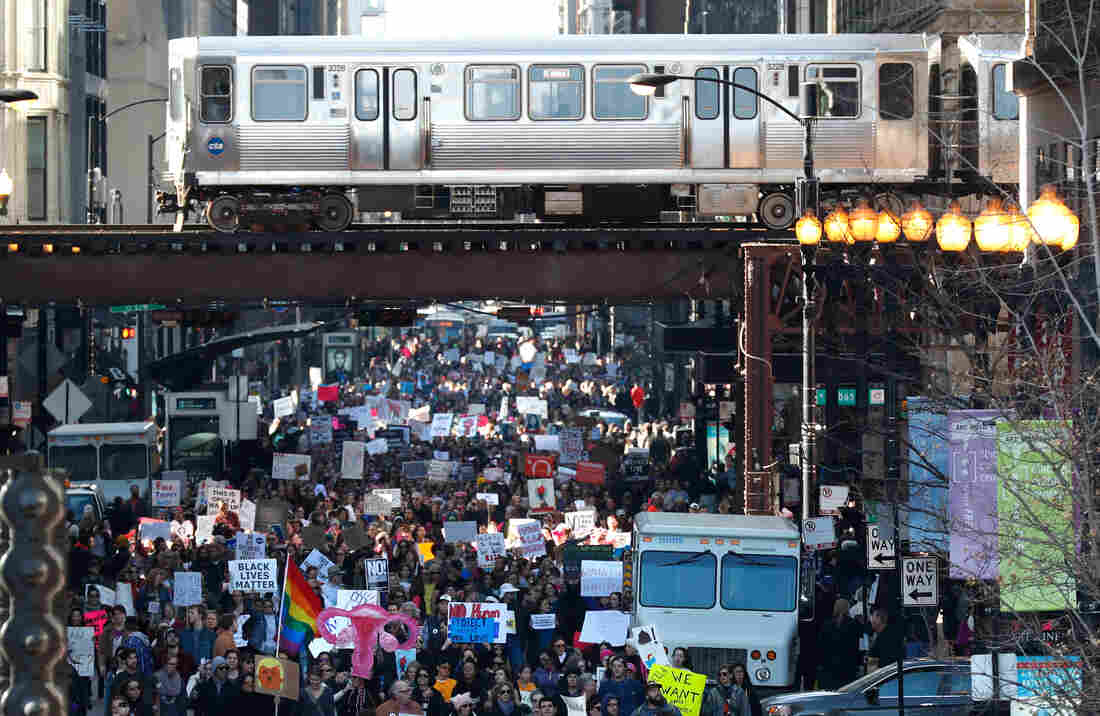 In what the Chicago Tribune is reporting to be the largest crowd outside of Washington, Chicagoans gathered at Grant Park on Saturday morning with plans for a rally, followed by a march. In the end, the march portion of the event was cancelled by the organizers when they determined there were too many people to march safely.

"Our march route is flooded. There is no safe way to march. We are just going to sing and dance and make our voices heard here," march co-chairwoman Ann Scholhmer told the crowd, according to the Tribune.

Thousands marched through the British capital Saturday in what was billed as a women's march, but was ostensibly an anti-Trump rally.

Marchers walked about 2 miles from the U.S. Embassy in Grosvenor Square to Trafalgar Square, within eyesight of Big Ben. The event ran for more than three hours and the size of the crowds easily dwarfed political rallies in the lead-up to last summer's Brexit vote here.

As in other cities around the world, protesters carried signs criticizing America's 45th president. Many signs read "We Shall Overcomb," referring to the U.S. president's signature hair-style. "Trump Special Relationship? Just Say No," read others, referring to the historically close diplomatic ties between the U.S. and the United Kingdom.

Many in this cosmopolitan, multicultural city — which voted heavily against the U.K. leaving the European Union — were already upset by Trump's election in November. The president's "America first" inaugural speech only fueled alarm here.

"It was a harrowing, chilling experience," David said, as he stood in front of London's National Gallery overlooking the rally in Trafalgar Square. "The sense of nationalism and protectionism was there and there was quite a sinister undercurrent."

David, who did not offer his last name, said he was disturbed by the insularity of the Trump's address, elements of which reminded him of the positions espoused by the political far-right here in the U.K.

"There is a movement in Britain called 'Britain first,' " he said, "which is a terrifying, horrible right-wing group."

The march in London was among a number of anti-Trump rallies across Western Europe on Saturday, including cities such as Berlin, Paris, Belfast and Copenhagen. 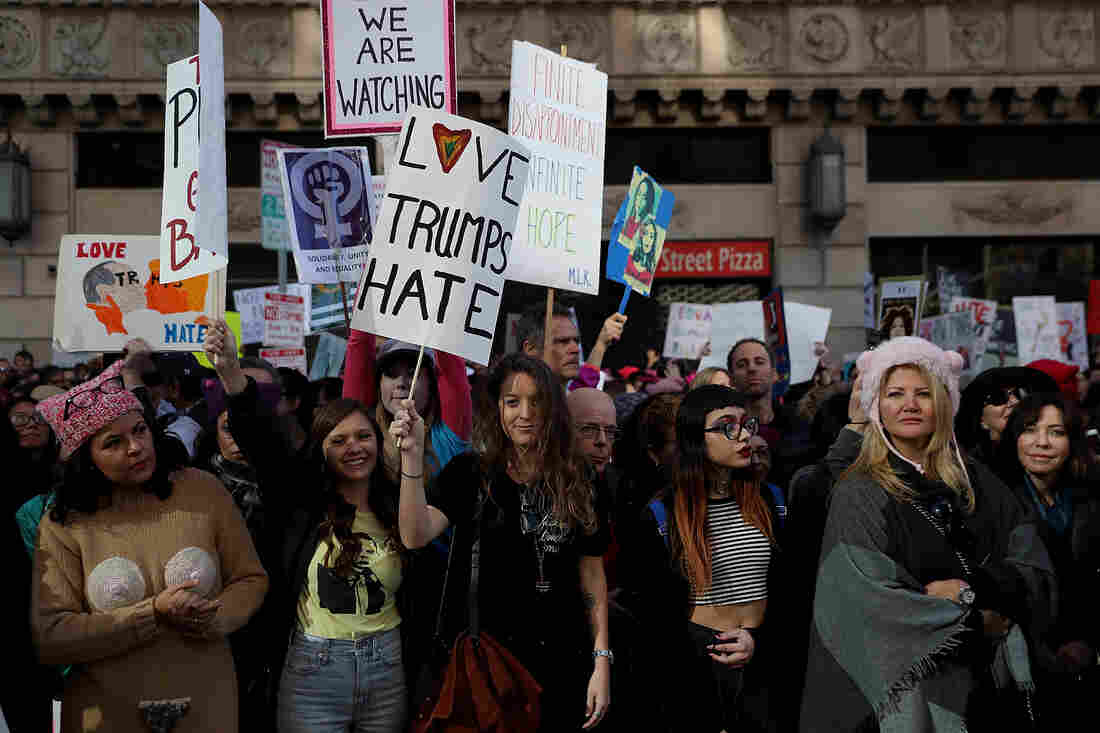 Participants hold signs as they wait for the start of the women's march in Los Angeles. Justin Sullivan/Getty Images hide caption

"I've never seen so many people standing in one place in Los Angeles in my life, and that includes sold-out Dodger Stadium," NPR's Ina Jaffe tells Michel Martin on Weekend All Things Considered.

As the demonstrators marched from one rally in Pershing Square to another rally outside City Hall, Ina says a single street could not contain all of them. Instead, marchers had to proceed down three parallel streets.

Supporters there brought up LGBTQ rights, religious freedom and women's rights, Ina reports — including one marcher who held up a sign with a picture of Carrie Fisher, which read: "A woman's place is in the resistance." 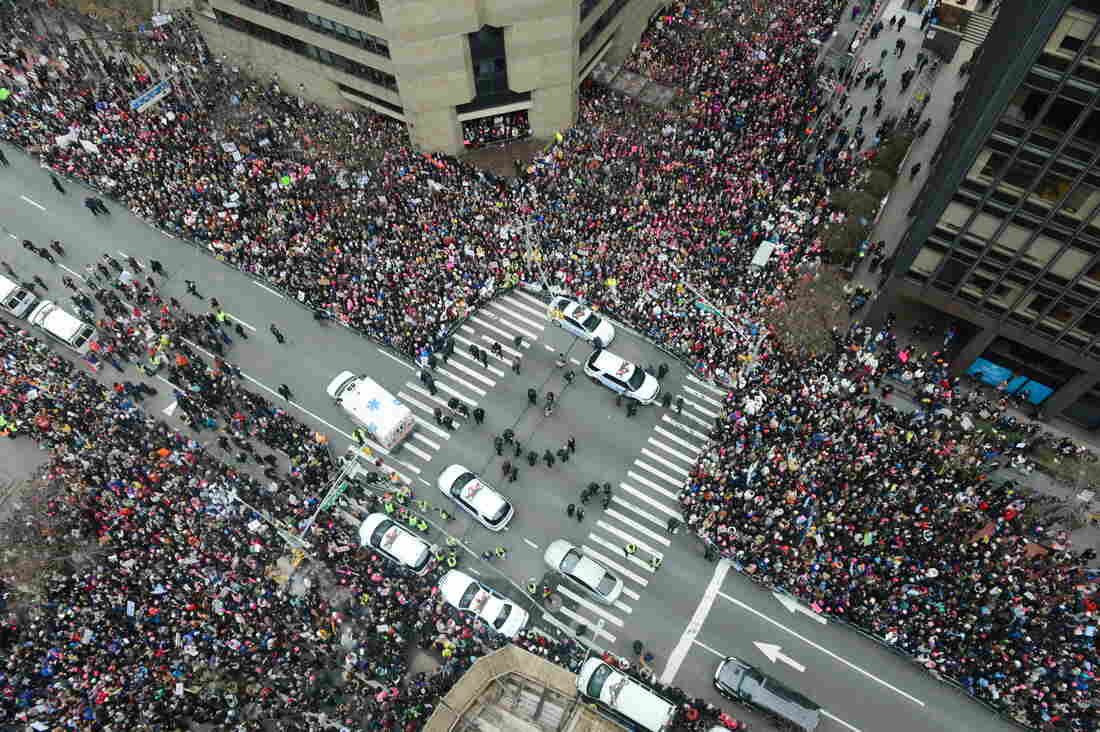 For a march fueled in part by dissatisfaction with President Trump, it seems only natural that the protesters finished their procession nearby Trump Tower on Saturday.

WNYC reporter Sarah Hayley Barrett tweeted that marchers shut down whole stretches of Madison Avenue, as they spilled off the planned route and took alternate paths to Trump Tower.

Shumita Basu, a producer with WNYC, noted that in Dag Hammarskjold Plaza, where many of the protesters converged, the march was a "sea of pink hats, signs."

Several thousand at the #WomensMarch in Raleigh @wunc pic.twitter.com/jOmWEdMxTo

"There's been a steady stream of marchers" in the streets of downtown Raleigh, reports Jess Clark of member station WUNC. "It spans the spectrum — protesters represent diverse issues, diverse backgrounds."

She notes that she has seen men in baseball caps, women in hijabs and several people in those distinctive pink caps.

"The massive crowd has taken over the downtown area, shutting down several streets in the process," The Associated Press reports from Raleigh.

The news service notes marches and rallies are taking place in cities across the state, including Charlotte and Asheville.

Mexicans and Americans marching in front of US Embassy México City #WomensMarch pic.twitter.com/Yl5qdyV9Qx

The march in Mexico City began at the U.S. Embassy and proceeded to the Angel of Independence monument. But, as NPR's Carrie Kahn reports, the march was so large, the crowd of demonstrators stretched from one landmark to the other.

Carrie says the march comprised a mix of Americans and Mexicans, who appeared to be protesting Mexican President Enrique Peña Nieto as much as President Trump.

Peña Nieto has dismal approval ratings in his own country; a recent poll showed only 12 percent of Mexicans approve of the job he's doing.

The chants — shouted in both Spanish and English — focused not only on the two leaders, but women's rights and gender equality, as well.

"We want to protect Mother Earth, first of all, for the future generations and also we have our human rights as women," marcher Julia Brown Wolf told Kealey. Brown Wolf had traveled from the Crow Creek Indian Reservation for the demonstration. "You know, we have to think in seven generations ahead."

Kealey reports Brown Wolf marched with her granddaughters. "She does not want them to face discrimination for being a woman or a Native American," Kealey says. 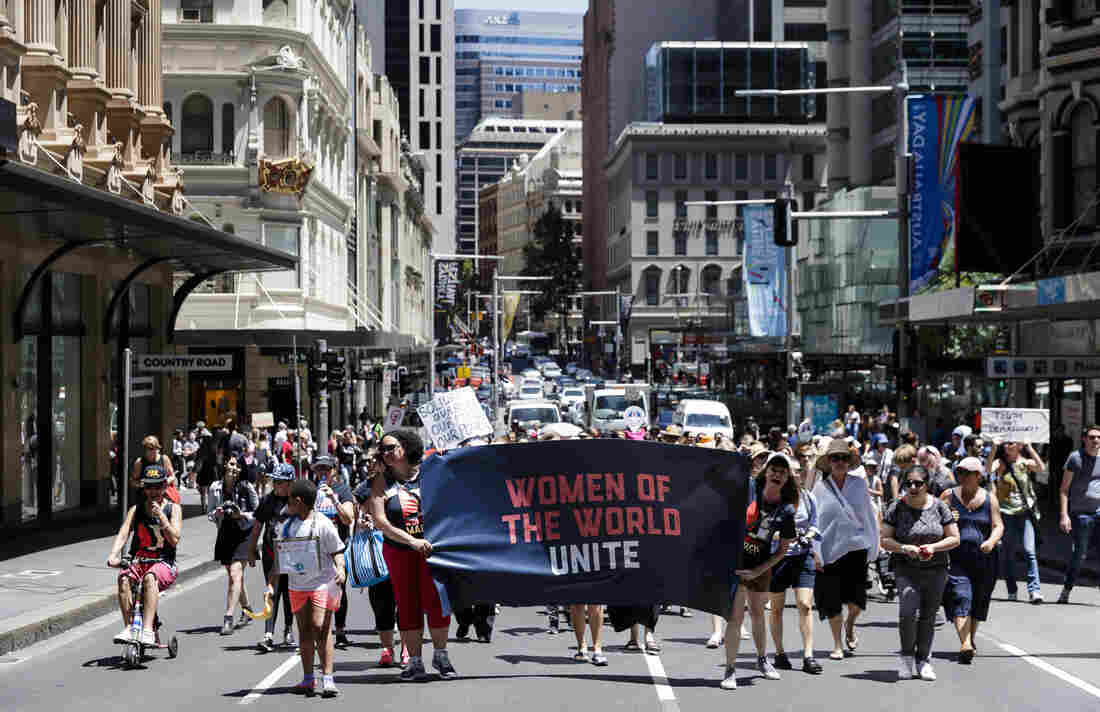 Demonstrators gathered in the city's Hyde Park carrying signs with slogans like "Bridges not walls," and "A woman's place is in the revolution."

As protester Stef Vogt told The Sydney Morning Herald, "We want to send a sign to the women in the U.S. that we're all in this together."

But participants also say this isn't just about Trump.

"Women's rights are not about women," musician Amanda Palmer told a the marchers. "They're about everyone. My son and husband are feminists."

In Buenos Aires, American expats and locals held signs and wrote messages across their bodies as they gathered for a rally in support of the women's march. 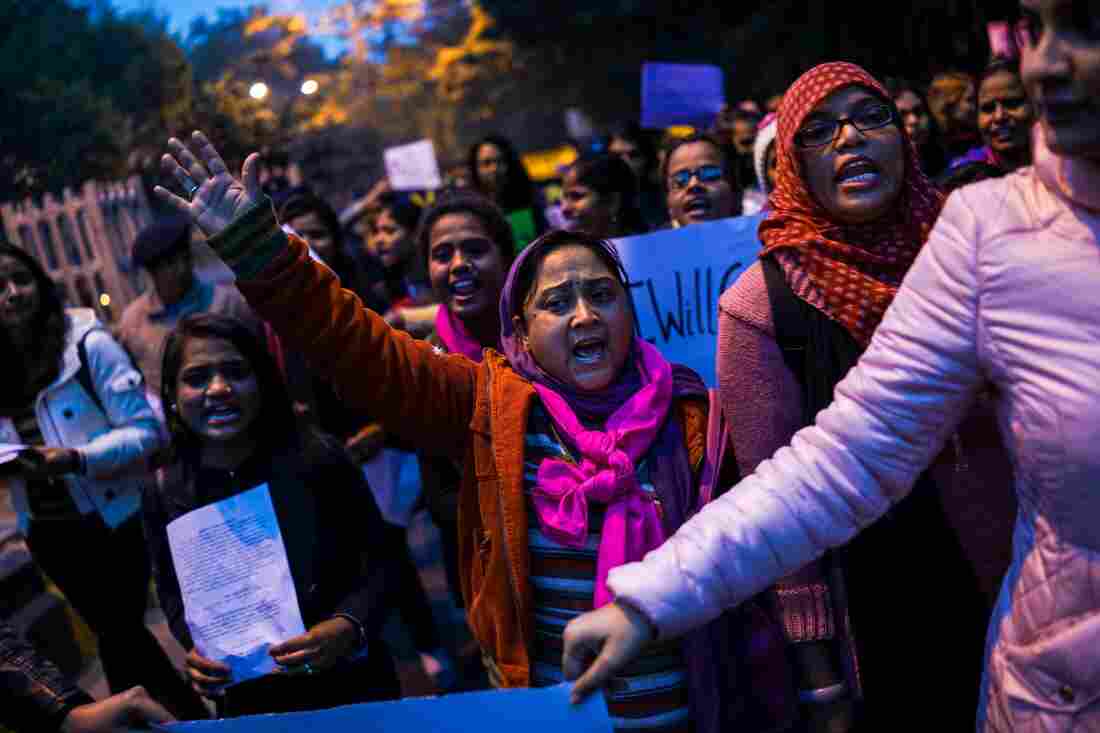 Indian women in New Delhi participate in a nationwide "I Will Go Out" march to raise questions about safe access for women and marginalized communities in public spaces across India. Chandan Khanna/AFP/Getty Images hide caption

While some protests are principally marching to express solidarity with the demonstrators in the U.S., others are directly raising issues of misogyny on a more local level.

In New Delhi, protesters carried signs reading "I will go out," to protest sexual harassment in public spaces. 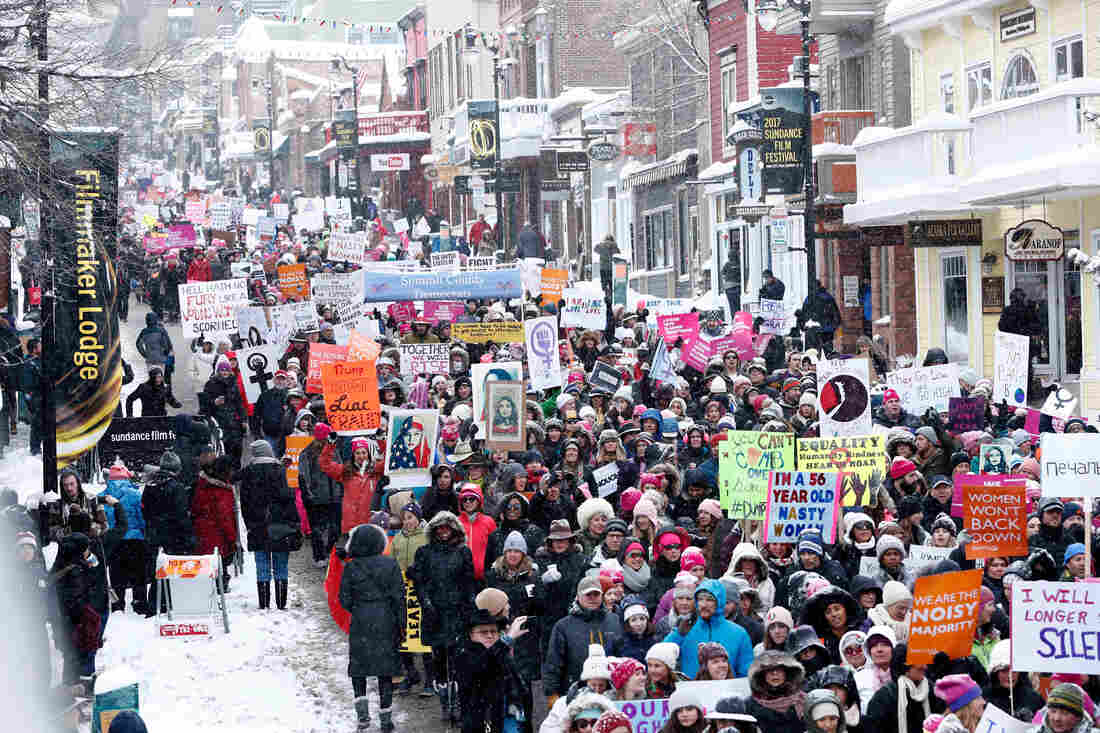 The Sundance film festival is underway in the city, but women, men and children still stepped away to trudge down Main Street in the blustery snow. Many of the filmmakers and movie-lovers in Park City for the annual event came to protest Donald Trump's presidency and to defend women's rights.

They chanted slogans such as "Love Not Hate, Make America Great" and "We live in Trumpled Times." Then they rallied as the snow flurried around them, with comedian Chelsea Handler and actress Maria Bello among the speakers.

Longtime activist Dolores Huerta, who's the subject of a documentary that premiered at the festival, led the crowd in chanting, "Si se puede, Yes, we can."

Jessica Williams, who stars in one of the feature films premiering at the festival, told the crowd that her ancestors fought for her to be where she is — to "stand in the snow in front of a bunch of white people in Uggs."

"I grew up thinking (the) civil rights movement already happened," said Williams. "This election is a wake up call. The silver lining is, we are here ... in literally 21 degrees supporting each other."

And all the way from Baltimore, the Lethal Ladies of Bliss step team, featured in a new documentary premiering Saturday, roused the crowd with foot-stomping chants of resistance.

There were even "marchers" in Antarctica. Linda Zunas, a reseacher in a remote corner of the continent called Paradise Bay, told The Independent that she organized a group of 30 people with banners reading "Penguins for peace" and "love from seven continents."