Listen
Video Programming Wherever, Whenever 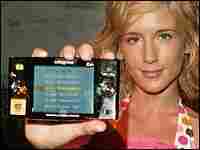 A model poses with the new TiVoToGo device, whick allows viewers to take their favorite programs with them. Peter Kramer/Getty Images hide caption

USC's Jeffrey Cole: Games will be hard-pressed to compete with one of television's most attractive features -- it brings familiar characters into our homes night after night.

USC's Jeffrey Cole: His own "aha!" moment convinces him people will watch TV on small screens on cell phones, video iPods and other devices, despite the quality.

TiVO president Tom Rogers: The trend towards "convergence" of the Web and TV will cause tremendous change in viewing habits.

USC's Jonathan Taplin: Convergence of the Internet and traditional TV has risks as well as advantages.

Over the holidays, millions of Americans received video gadgets as gifts, from pocket-sized video iPods to flat screen high-definition TVs. Both technologies are the first signs of a sweeping television revolution -- undoing nearly 60 years of viewing habits, and forming new ones.

In the first of a three-part series of reports on the future of television, Rick Karr looks at the ways technology is changing how viewers consume programming.

As with most other things related to technology, it seems teenagers are at the cutting edge when it comes to next-generation television. And it's increasingly clear they want two main things from their sets: complete control and choice.

Cable or satellite services with hundreds of available channels aren't the point. Younger viewers spend increasingly more time with video games and the Internet -- where choice and control are key -- and want the same experience with their television programming.

Jeffrey Cole, director of the Center for the Digital Future at the University of Southern California's Annenberg School for Communications, says teens today believe they have a right to do things with media that their parents could never have imagined.

"The belief that music -- and now video -- can be moved freely from a main system in the home onto a portable cell phone, an iPod, into a car, onto a disc to take and play on other peoples’ systems," he says. "They're not operating on anyone else’s schedule."

Cole adds many technologies that cater to those beliefs are already here -- millions of televisions are connected to TiVOs or other digital video recorders, or to on-demand cable systems that let people watch shows whenever they want. Now broadcasters are starting to let people watch wherever they want, too -- beamed directly to their mobile phones, for example, or downloaded off the Web.

In the very near future, there will be little difference between surfing the Web on your TV and watching TV on your computer. Internet Protocol Television, or IPTV, will blur the thin line currently separating both technologies -- meaning video programming wherever, whenever, on-demand and in many different formats.