Accessibility links
Soulive: Mixing It Up with Jazz and Funk Soulive takes jazz back to the dance floor, mixing it with soul, funk and hip-hop. A new CD adds a sizzling horn section and guest vocalists. Trio members Alan Evans, Neal Evans and Eric Krasno tell Michele Norris about Break Out.

Listen
Soulive: Mixing It Up with Jazz and Funk 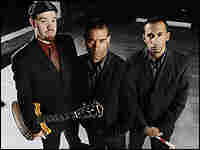 The trio Soulive — Eric Krasno, Alan Evans and Neal Evans — brings in the brass on a new CD. hide caption 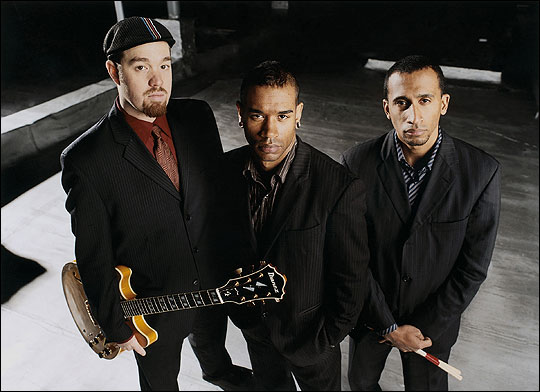 The trio Soulive — Eric Krasno, Alan Evans and Neal Evans — brings in the brass on a new CD.

The trio Soulive is on a mission to bring jazz back to the dance floor by mixing it up with soul, funk and hip-hop. And judging from their latest release, they seem to be on track.

NORRIS: The band consists of Eric Krasno on guitar and brothers Aaron(ph) Evans on the drums and Neal Evans on the B3 Hammond organ.

NORRIS: On their latest CD "Break Out", the trio focuses on beat-driven songs with the help of a sizzling horn section and guest appearances from several established vocalists, including Corey Glover, Ivan Neville, Chaka Kahn and Reggie Watts.

(Soundbite of "What Can You Do")

NORRIS: And though Soulive is a relatively young band--the oldest member is in his early 30s--they cook up old-school grooves that hearken back to Stevie Wonder, James Brown, or Sly and the Family Stone. The trio, Eric, Aaron and Neal, sat down with us recently to talk about their work and the difference between music that's got a funky feel as opposed to straight-up down-home funk. Eric says it's all in the beat.

Mr. ERIC KRASNO (Soulive): It's got to have that--the backbeat, the funk backbeat and syncopation and that feel. It's all about the feel of what you're hearing, you know.

Mr. NEAL EVANS (Soulive): Yeah, this is Neal. Funk in itself, yeah, I would say has--it just has a deep groove backbeat to it. It makes your neck snap.

NORRIS: Is it almost like the beat has to stay almost in sort of a constant motion? It feels almost like a train.

(Soundbite of "Take It Easy")

Mr. IVAN NEVILLE (Singer): (Singing) ...(Unintelligible) you gotta get up.

NORRIS: You hear Ivan Neville there on the vocals and the organ really seems to drive that song.

Mr. KRASNO: Yeah, and that one came--this is Eric. That one I just kind of had the groove for that song and like the bass line and whatever and when Ivan came in, I played him that track and he just started singing. And actually, Alan, you came up with the take it easy part, right?

Mr. KRASNO: Alan just starts singing `Take it easy' and Ivan started doing his little rapping part to it. And like, literally, it came together in about 20 minutes and--because I just had the track and I was like it could really use some sort of vocal to it because it was just kind of a groove, you know. But Ivan got into the vocal booth and then we all went out into the room and put a mike up and started vibing out. We had about 20 people or so in there going `Take it easy.' There was a bunch of people hanging out so that one kind of came together as a little improv session. It was cool.

NORRIS: You know, usually in those songs you talk about James Brown and George Clinton, Parliament and Funkadelic, it's usually the bass that drives the downbeat. In your case, the trio doesn't include a bass player. So how do you keep that going.

Unidentified Soulive Member: Yes, we do.

NORRIS: Are you actually talking about playing a bass guitar or actually using your keyboards to hit that?

Mr. N. EVANS: On "Take it Easy," for example, like you were talking about the organ but the bass line that's going on is simultaneously going on with the organ. One is being played in my right hand and the bass line is being played in the left hand. And a lot of times people at shows are looking for, like, where's the bass player on stage. If they don't know us, they'll look at Kras and they're like, `I know that's a guitar.'

Mr. N. EVANS: But he's not playing bass right now because he's soloing. So one thing I've been trying to do for years, and I'm still searching, is to actually get a sound that sounds exactly like the bass. I'm trying to fool people out there. I don't want anyone to go away from a show thinking, `Ah, there should have been a bass player.' And it's great because I have tons of friends that are incredible, absolutely incredible bass players, and when they're on stage bugging out to what I do and what I'm trying to do it's a good feeling.

NORRIS: Neal, you wrote the song that Chaka performs on. It's called "Back Again." Did you write that with her in mind?

Mr. N. EVANS: No, not originally. The song was actually written probably a couple years before that. It was one of those things. It kind of sat till it was the right time to--for it to come to fruition and there was Chaka. You know, it just made perfect sense. We were like, that's the tune, like, that's the one that Chaka sang on.

NORRIS: And, boy, does she sing.

(Soundbite of "Back Again")

NORRIS: What are your live shows like? Take me inside that room.

Unidentified Soulive Member: You know, they're definitely sweaty and a lot of energy. We come out--we're not afraid to come out raging. You know, we come out and we give it to you. You know what I mean? And then we have, you know, contours to the show where we break it down. We play a ballad and we try to, like, give you, you know, all we've got in a nutshell. You know what I mean? And it's structured, but at the same time there's a lot of room for it to go certain places and it really depends on the room and the vibe of what's going on. And we may write a set list and completely change it when we get on stage and see what the people are into and see what the crowd's like.

NORRIS: Alan, Neal, Eric, thanks so much for coming it to talk to us.

Unidentified Soulive Member: It's been great.

MELISSA BLOCK (Host): ...and I'm Melissa Block. You're listening to ALL THINGS CONSIDERED from NPR News.

The audio of this story refers incorrectly to one of the band members as Aaron Evans. His name is Alan Evans.