Accessibility links
Surgery on Israeli Prime Minister Concludes Ariel Sharon is in stable but serious condition after five hours of surgery that stopped bleeding in his brain. A brain scan on the Israeli prime minister shows significant improvement, a hospital official says. 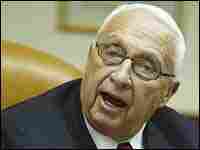 Ariel Sharon speaks at the start of his weekly Cabinet meeting on Jan. 1 at his offices in Jerusalem. Getty Images hide caption

The Mideast in Depth

Hadassah Hospital director Dr. Shlomo Mor-Yosef said Sharon was returned to intensive care after the surgery and a brain scan.

This was Sharon's second operation in two days. Outside experts believe his prognosis isn't good.

His stroke on Wednesday was far more serious than the mild one he suffered in December.

The surgery Friday followed a seven-hour operation Sharon underwent Thursday morning after he suffered a massive brain hemorrhage. Doctors had put him in a medically induced coma to give his body time to heal, but most outside experts said his chances for recovery were slim.

On Friday morning, doctors sent him back for a brain scan to monitor his condition. After the scan, he was rushed back into the emergency room, Mor-Yosef said.

Sharon's sons, Omri and Gilad, were camped out in a room next door to their father's at the neurological intensive care unit.

Dr. Yonathan Halevy, a senior doctor at Jerusalem's Shaarei Zedek Hospital who is not treating Sharon, said he was also worried about the Israeli leader's condition.

"The fact that the bleeding has resumed is a sign of a significant deterioration," he told Israel TV.

Outside medical experts said bleeding from the stroke may have led to interference of the drainage of the cerebral spinal fluid that bathes the brain, or he may have developed inflammation and fluid leakage within the substance of the brain.

Sharon's sudden, grave illness left his ambitious peace agenda in doubt and stunned Israelis, who were grappling with the likelihood that the man who dominated politics in the regions for decades would never return to power. "Between hope and despair," read the banner headline in the Maariv daily.

Aides to Sharon said they were working on the assumption he would not return to work.

Sharon's supporters prayed for his recovery. Sephardic Chief Rabbi Shlomo Amar advised Israelis of which psalms to read as part of their prayers for Sharon.

Rabbi Shmuel Rabinovitch of the Western Wall said he received dozens of e-mails praying for Sharon's health that he printed out and stuck in the cracks of the holy site. Callers from as far away as Venezuela and the United States asked for advice in praying for Sharon, he said.

Svetlana Kremitsky, a hospital worker who brings food to the patients in Sharon's ward, said the hospital was filled with worry.

"You can feel it in the air, we're all concerned," she said.

Sharon's deputy, Ehud Olmert, has taken the reins as acting prime minister and tried to convey a sense of stability. Leaders of Sharon's new Kadima Party said they would rally around Olmert and a new poll released Friday showed Kadima would still sweep March elections, even without Sharon.

Doctors said it would take time to determine how much damage was caused by the widespread stroke Sharon suffered Wednesday night adding that media reports of permanent, significant damage were irresponsible.

Sharon's collapse less than three months before national elections also left his Kadima party, which he formed in November, in limbo.

In the short-term, Israelis appeared to still be supporting Kadima. A poll published in the Yediot Ahronot daily Friday found that an Olmert-headed Kadima would win 39 of 120 parliament seats, the most of any party and slightly less than the party polled under Sharon.

The dovish Labor Party would get 20 seats, and the hard-line Likud, which Sharon left to form Kadima, would capture 16 seats, according to the poll. The poll of 500 people was taken Thursday. It had an error margin of 4.4 percentage points. Some pollsters said the results might be influenced by sympathy for Sharon, and could change during the three-month campaign.

Peres would net 42 seats as head of Kadima, but some analysts said it was unlikely he would be chosen to lead the new party. He met with Olmert on Friday, but did not give details.

"We will know how to continue Israel's policy ... to continue Ariel Sharon's policies," Peres told reporters.

Palestinians reacted to the fall of their longtime enemy with a mix of glee and apprehension. Some Palestinian leaders worried that Sharon's illness could derail their Jan. 25 parliamentary elections. "We are watching with great worry at what might happen if he is harmed," said Palestinian leader Mahmoud Abbas, who called Olmert to express wishes for Sharon's recovery.

Some Palestinian children gave out sweets in the Gaza Strip at news of Sharon's illness.

U.S. Secretary of State Condoleezza Rice praised Sharon as "a man of enormous courage," and British Foreign Secretary Jack Straw said he was praying for a miraculous recovery.

Two prominent rabbis visited Sharon's bedside Thursday on the heavily guarded seventh floor of the hospital and prayed along with his family for his recovery, one of the rabbis, Yitzhak Batzri, told Israel Radio. Batzri's father, leading Jewish mystic David Batzri, held Sharon's hand to direct a prayer toward him, Yitzhak Batzri said.

Sharon had been expected to win the March 28 election in a landslide as head of Kadima, which he formed after bolting Likud last year. Many hardline Likud lawmakers tried to torpedo the Gaza withdrawal and Sharon formed Kadima to free his hands to make further peace moves with the Palestinians.

Israelis were shocked by the illness of a man who was in public life for decades, first as a hero in Israel's earliest wars and later as the country's best known political hawk. Sharon led Israel's fight against the Palestinians during nearly five years of violence and his security credentials gave him the credibility with the Israeli public to make concessions to the Palestinians.

"He was one of a kind. I don't know any other man like him," said Joseph Lapid, head of the opposition Shinui Party.

Sharon first rose to prominence as an army officer, setting up a unit that fought Palestinian infiltrators in the 1950s. He served as a commander of the Gaza region after Israel captured the territory in 1967, before entering politics and forging the hardline Likud Party. Sharon briefly returned to the army to lead the fight against Egypt during the 1973 Mideast war.

As defense minister, Sharon directed Israel's ill-fated invasion of Lebanon in 1982 and was forced to step down by an Israeli commission of inquiry that found him indirectly responsible for a massacre of Palestinians in two refugee camps by Christian Phalangist soldiers.

Sharon re-emerged as prime minister in 2001 soon after the outbreak of new Israeli-Palestinian violence, and two years later he reversed his decades-long support for Jewish settlement, and pushed through his Gaza pullout plan.

Despite the pullout, Sharon remains widely reviled in the Arab world for his tough actions against Palestinians.

Sharon fell ill Wednesday evening while he rested at his ranch in southern Israel ahead of a medical procedure scheduled for Thursday to close a small hole in his heart. Doctors rushed him to Hadassah Hospital, instead of a hospital in nearby Beersheba, because his condition did not appear dire, Sharon aides said. He suffered the bleeding stroke during the hourlong drive to Jerusalem.

A hospital director, speaking anonymously to the Haaretz daily, said Sharon should have been in the hospital the night before his heart procedure, and he called the treatment "negligent."

Former Likud lawmaker Ronni Milo told Army Radio that Sharon should not have "reached a situation when he has to go through a catheterization on Thursday and the night before he is staying on his farm very far from the hospital."