Accessibility links
Doctors Monitor Sharon; Prognosis Seen as Poor As the world waits for definitive news about Israeli Prime Minister Ariel Sharon, he remains in serious condition at a Jerusalem hospital. Doctors will begin bringing him out of a drug-induced coma on Sunday. They offer scant hope for a full recovery.

As the world waits for definitive news about Israeli Prime Minister Ariel Sharon, he remains in serious condition at a Jerusalem hospital. Doctors will begin bringing him out of a drug-induced coma on Sunday. They offer scant hope for a full recovery. 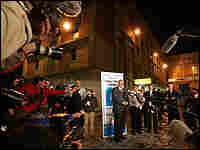 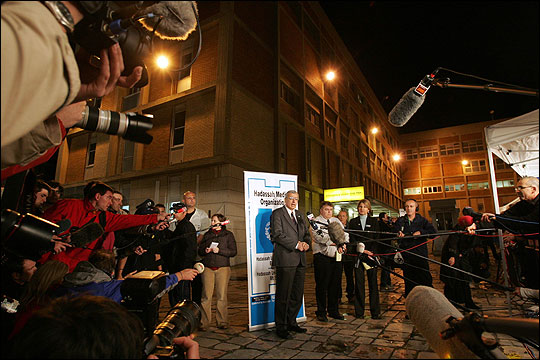 SHLOMO MOR: (Through Translator) Can we say the prime minister is out of danger? Is there room for optimism as expressed by his aides and visitors? We, as people, are optimists, but I cannot say that he's out of danger. I can say that his condition is still serious, but there are very slight signs of an improvement. But the situation is still difficult.

SIMON: Those are the interpreted comments of Dr. Shlomo Mor-Yosef, who's director of Jerusalem's Hadassah Aym Karim Hospital. At this hour, Israeli Prime Minister Sharon remains in a medically induced coma, and the prognosis is not considered good. Mr. Sharon suffered a major stroke on Wednesday and doctors have operated three times since then to relieve pressure and bleeding in his brain. Doctors say they plan to wait until tomorrow to further gauge Mr. Sharon's condition. His deputy, Ehud Olmert, is now the acting prime minister of Israel.

Ariel Sharon's sudden illness has upset the fortunes of his newly formed Kadima Party, the centrist party that had been expected to prevail in the upcoming elections. Now should he live, Mr. Sharon is not expected to be able to lead his country or his party. Should he die, his sudden absence could shake Israeli-Palestinian relations at an awkward time in the wake of the Israeli pullout from Gaza.

Mr. Sharon, who for most of his life has been seen as a hawk, has in recent times pushed heavily toward the political center in Israel. His present condition raises new doubts as to whether that center can hold. We will be keeping you abreast of Ariel Sharon's condition throughout the day.

We want to go now to NPR's Deborah Amos in Jerusalem.

Deborah, thanks very much for being with us.

SIMON: And expand for us, please, a bit on the latest signals we get about Mr. Sharon's condition, because as doctors noted, in some patients you would read this as at least some encouraging signs of improvement.

AMOS: Well, there was some optimism in the details. He's stable, as you heard the doctor say, and a brain scan showed that the left side of his brain is intact. But they were very clear he's not out of danger, and they're still battling to save his life. Now there were early reports he could be weaned off those heavy drugs that have induced a coma on Sunday. Now it seems that decision will only be taken after a meeting of all of his doctors tomorrow morning. The damage to the right side of the brain caused by that massive stroke is still not clear. It's being masked by the treatment. And, Scott, Israelis hang on every detail of these health reports. Today is the Jewish Sabbath, and synagogues across the country said prayers for the prime minister.

SIMON: Let me ask you about Ehud Olmert. He's Mr. Sharon's deputy, now the acting prime minister, the longtime mayor of Jerusalem. He's in a difficult balance now at the moment, on the one hand having to instill confidence in the nation that there's still a sense of direction; on the other hand, I guess, not appearing to be too active while Mr. Sharon remains gravely ill. What's your...

AMOS: And in all the pictures, he leaves--excuse me...

AMOS: ...but in all the pictures, he leaves the chair next to him empty.

AMOS: You know, he's very keen to reassure Israelis that the government is moving forward. He's taken calls from world leaders. But each time there's a health crisis, Scott, most of the top government officials rush off to the hospital to be at the bedside. So, for example, the future of the Kadima Party, the party founded by Sharon which was approved as an official party on the day of his stroke, is still uncertain, and many leading politicians who joined Sharon, they said they'd remain in the party, but here's the problem. The party's bylaws state that Sharon and only Sharon must take all party decisions, and he hadn't done that before his stroke.

SIMON: Mm. Now there's a timetable, too, that have to be observed in elections, aren't there?

AMONS: Well, they--we are coming up to a March 28th election, and it depends on what happens to Ariel Sharon what happens next to the government. There's a hundred-day period, and at some moment, there will have to be a new government. Ehud Olmert is the acting prime minister right now.

SIMON: Deborah, one of those overall questions that we ask in this case, which often, I guess, just sounds too soft to be believed, on the other hand sometimes it's the best way of eliciting an answer--what's the mood like in this country, where Sharon has been such a powerful figure for three decades, in and out of power, and a man who announced one day, `For the good of the security of Israel we have to have a unilateral withdrawal from Gaza'?

AMOS: Well, there's a lot of talk here about a political vacuum, and that's because, for many Israelis, Sharon simply cannot be replaced, because there is no one like him. So that raises questions about his party. But more important, it's a question about the continuation of the middle ground in politics that he carved out, a way of thinking about dividing the land between the Israelis and the Palestinians. Israel is a stable democracy, so that will sort out politically. But there's a psychological crisis here. Israelis are now deprived of a prime minister who made them feel save, and that is very important. Even if they didn't like him, when things got tough, Israelis depended on Ariel Sharon to fix it. And that's why people are so unsettled by this sudden illness.