'Misirlou' as Performed By... 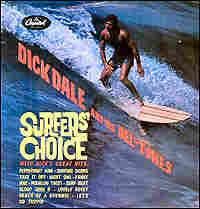 Dick Dale & His Del-Tones turned the song into a surf guitar hit in 1962. hide caption

The tune "Misirlou" has traveled quite a path, from klezmer music to 1950s exotica acts and finally to surf guitar and an appearance in the 1994 film Pulp Fiction.

Many of you heard it again in a Jan. 1 feature by Jon Kalish on Lionel Ziprin's efforts to preserve the recordings of his grandfather, Rabbi Nuftali Zvi Margolies Abulafia.

Surf guitar legend Dick Dale & His Del-Tones turned the melody into a sizzling electric riff in the early 1960s. His grandparents were born in Lebanon, and as a child he remembers hearing his relatives play "Misirlou," which translates as "The Egyptian," on the Middle Eastern lute called the oud.

Yale Strom, adjunct professor of enthnography at New York University, helps trace the history of a hardy melody all the way back to its Greek and Turkish roots.