Accessibility links
Bremer's Tale: The Top American in Iraq Two big surprises awaited Paul Bremer when he arrived in Iraq: that the country's chaos made it ripe for insurgency; and that the U.S. government would withhold additional troops. Bremer became the head of the Coalition Provisional Authority in Iraq in May of 2003. 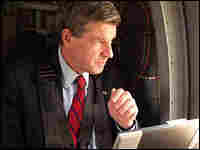 Two surprises awaited Paul Bremer when he arrived in Iraq: that the country's chaos made it ripe for insurgency; and that the U.S. government would withhold additional troops.

Those revelations are in Bremer's new memoir, My Year in Iraq. As the head of the Coalition Provisional Authority in Iraq, Bremer was the highest authority figure in the country.

But in dealing with the United States, Bremer said he had difficulty in getting answers from Defense Secretary Donald Rumsfeld.

A graduate of Yale and Harvard universities, Bremer worked in the State Department for 23 years. He also served as President Reagan’s ambassador at large for counter-terrorism.

Read an Excerpt from My Year in Iraq:

I had braced myself to see sick children, but nothing could have prepared me for the rows of cribs and battered incubators. Because the hospital generator ran only at night, and then only periodically to save fuel, the air-conditioning plant was not working. The air was oppressive and stale. Flies swarmed through the open windows and clumped on the chipped metal bars of the cribs. Distressed mothers, half-shrouded in black abaya robes, waved cloths or squares of cardboard to keep the flies from their children's faces.

In the neonatal ward, I bent to read the stainless-steel model tag on an incubator. It had been built in "West Germany" in 1962, forty years before. The tiny baby inside wore a ragged cloth diaper. I touched the chipped glass. Fierce sunlight from the open windows provided the only warmth. The nurses shifted the powerless incubators from sunlight to shade, improvising to maintain an even temperature.

In the next ward, we stopped at the crib of a shriveled infant, so small I was sure she was a preemie. No shrouded woman fanned the air at her bed.

"Why don't you put her in an incubator?" I asked the attending pediatrician, a tall young man with stooped shoulders and a two-day growth of beard.

"Because she is not one of the premature," the doctor said. He glanced at the child's chart. "Little Khadija is actually . . . seven months old. She is just badly undernourished."

I studied the feeding tube in her crusted nostril. The child stared back at me with unblinking liquid eyes. I had to look away. Was she a war orphan or a victim of Baathist repression and mismanagement? It didn't matter. Like millions of other Iraqis, she needed help. Seeing this suffering baby, it hit me like a thunderclap: I was responsible for her, and for thousands like her. Having authority as administrator meant nothing if I couldn't bring some improvement in the lives of ordinary Iraqis. Before it was too late.

The Terrorists Reveal Their Plans -- and Concerns About Democracy

[In mid January]… we captured a Pakistani Al-Qaeda courier carrying a computer disc with a manifesto–cum–operational report. …The message was addressed to "the hawks of glory," code for Osama bin Laden and his lieutenants. It was a rambling screed against Americans, Jews and Israelis, and the Iraqi Shia.

Zarqawi's report acknowledged the increasingly difficult operational situation for the Islamist insurgents. As Iraqi security forces replaced Coalition troops, the insurgents had to fight this new enemy, "the real danger that we face, for it is made up of our fellow countrymen, who know us inside and out."

Another danger was the "masses" of Sunni Arabs who looked forward to a "sunny tomorrow, a prosperous future." It was up to the insurgent mujahidin to radicalize the Sunni and to galvanize resistance by increasing "martyrdom operations," of which Zarqawi claimed responsibility for twenty-five," including among the Shia and their symbolic figures."

Zarqawi admitted the Kurds were a "thorn" in the side of the insurgency. He identified the Iraqi security forces as another major target of the terrorists.

The insurgents' ultimate goal was to use suicide attacks to provoke the Shia into an open civil war with the Sunni masses. But Zarqawi was worried: "Democracy is coming, and there will be no excuse [for the insurgency] thereafter."

"Double Date" with the Bushes

There was one pleasant interlude during that stressful week: On Wednesday, September 24, President and Laura Bush invited Francie and me to join them for a private dinner at the White House. Once again, the president took care to ensure that the dinner was known in Washington circles. The Washington Post referred to this as our "double date."

Francie and I went up the elevator in the East Wing to the family's private quarters, and when the elevator door slid open, the Bushes were there with hands extended.

The president was informally dressed in slacks and a dark blue sport shirt; Mrs. Bush was a little more formal in a suit and high heels. They were relaxed and soon so were we. One immediate bond was the Bushes' pets, Spot the Brittany spaniel; Barney, the black Scottie; and the even blacker cat, India. The pets milled underfoot with charming ill discipline, which gave the residence the feel of a well-loved family home.

The president drew me over to a yellow couch at the end of the room and we talked intently about Iraq as Francie and Mrs. Bush discussed books. At least I supposed that's what they were talking about because both are passionate readers, and, it turns out, both read in bed. I learned that the president and I end our days with almost identical words: "Please! Put your book down and turn out the damn light."

Excerpted from My Year in Iraq by Ambassador L. Paul Bremer III with Malcolm McConnell. Copyright © 2005 by L. Paul Bremer. Excerpted by permission of Simon and Schuster, Inc. All rights reserved. No part of this excerpt may be reproduced or reprinted without permission in writing from the publisher. 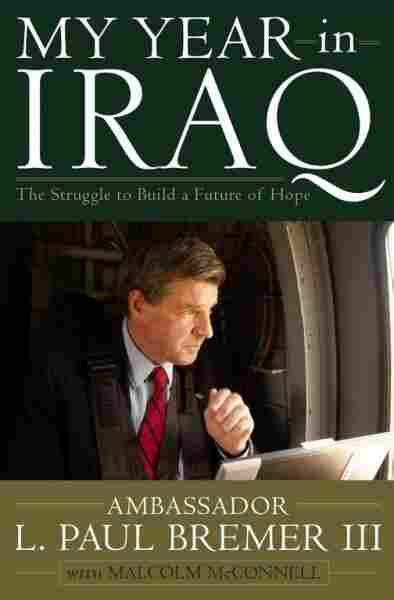 My Year in Iraq

The Struggle to Build a Future of Hope

Title
My Year in Iraq
Subtitle
The Struggle to Build a Future of Hope
Author
Malcolm McConnell and L. Paul Bremer