Accessibility links
'The Phantom' Sets All-Time Mark on Broadway Andrew Lloyd Webber's The Phantom of the Opera became the longest-running show in Broadway history Monday, breaking the uber-composer's own record that he set with Cats. 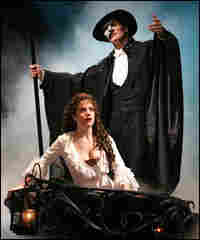 The Look of a Legend

Visual trademarks have helped set 'The Phantom of the Opera' apart:

Music from 'The Phantom'

"Music of the Night"

From the original cast recording, The Phantom of the Opera.

Andrew Lloyd Webber's The Phantom of the Opera became the longest-running show in Broadway history Monday. The streak of 7,486 shows over nearly 18 years breaks the uber-composer's own record, which he set with Cats.

Since 1988, 11 million people have seen The Phantom on Broadway, where the show has netted more than half a billion dollars in tickets. And, almost 18 years since it opened, it's still playing at near capacity. Lines of ticket holders snake around the block before each performance at the Majestic Theatre.

That's a far cry from the early 1980s, when the idea for the show came to composer Andrew Lloyd Webber when he picked up a copy of the 1910 Gaston Leroux novel about a disfigured man in a mask who haunts the Paris Opera and falls in love with a beautiful young singer. Lloyd Webber says he didn't think much of the novel -- but he thought it might make a good show.

"I was very keen to write something that was a high romance," says Lloyd Webber. "Having done Evita and having done Cats and various things which didn't let me kind of go in that direction at all."

So in 1986, The Phantom of the Opera opened in London, starring Michael Crawford -- known only for musical comedy at the time -- and Sarah Brightman, who was then Lloyd Webber's wife.

It came to New York two years later, with the same nucleus of a cast -- and an unprecedented $18 million box office advance.

Phantom director Hal Prince has won a Broadway-record 20 Tony Awards. His theory for its success is that audiences recognize a piece of themselves in the tortured Phantom's plight.

"Phantom of the Opera is not exactly a brain-twister, but psychologically, there's something going on that touches people and makes them think about their own responses to deformity -- what are their reactions; you know, just how romantic are they?"

There have been many adventures along the way -- some intended, and some not. For instance, the show's remote-control boat, which conveys Christine into the Phantom's lair, has proven vulnerable to radio signals from passing taxicabs.

"You know, these things happen," says Phantom portrayer Howard McGillin, who has played the show's lead in 1,400 performances. "The audience, I think, loves that stuff, because you feel like you're in on a moment that's really spontaneous."

Audiences have certainly found enough moments of scripted spontaneity and energy to keep them in the seats -- and keep the show onstage.

As Lloyd Webber says of his work taking up the top two spots in Broadway history, "I never thought it would happen with Cats" -- much less that Phantom of the Opera would overtake it.

'Phantom of the Opera' Site