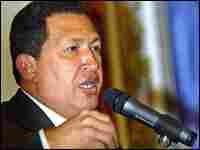 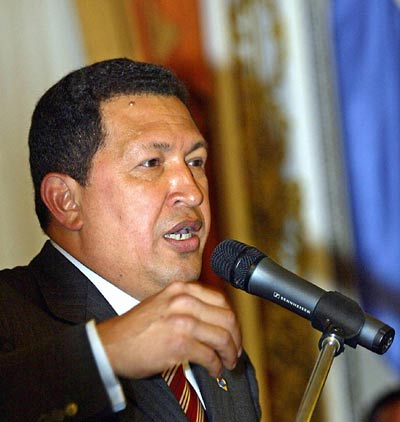 Venezuelan President Hugo Chavez is fast becoming a household name in America. Venezuela, which provides 14 percent of the US oil supply, is offering subsidized heating oil to poor American households at a time of surging energy prices. The Chavez government also offered $5 million in additional gasoline supplies in the wake of Hurricane Katrina. Now Chavez is increasingly courting US minority groups. This week a delegation of prominent Latino and African-American leaders wraps up a visit to see the social reform program led by Chavez. From Caracas, Brian Ellsworth has more.

The Trinidadian calypso classic "Matilda" is a tale of an unfaithful girlfriend who runs off to Venezuela with her man's money. Calypso legend Harry Belafonte has been singing the tune for US audience for over 50 years. But on Sunday, he had a chance to sing the song for Venezuelans as a guest on President Chavez's weekly Sunday broadcast.

Mr. JAMES EARLEY (Smithsonian Scholar): We've come to express our deep solidarity with the Venezuelan people, their revolution and the work they're trying to do for all of the world. Viva la revolucion!

ELLSWORTH: Despite his harsh condemnation of the Bush administration, Chavez took advantage of the opportunity to send similar regards to the United States.

ELLSWORTH: The visit is part of a larger effort by the Chavez government to build alliances with minority communities in the United States.

Pres. CHAVEZ: (Through Translator) We are all equal: black, white, Indian, brown or mixed. We are all equal. We need to put the fight against racism at the forefront of our struggle.

ELLSWORTH: Chavez has even portrayed the struggle of black Americans as part of his leftist movement. On Sunday, he said his government would seek to defend the rights of Afro-descendants around the world, including in the United States. At the same time, Venezuela is offering a 40 percent discount on heating oil to be distributed to poor communities through Citgo, which is owned by Venezuela. The program initially targeted poor inner-city communities, but last week the government announced that it would provide discounted fuel to four Indian tribes in Maine.

ELLSWORTH: Belafonte's delegation expressed admiration for Chavez's economic development programs as they toured a community center in Caracas' poor west side. The $8 million project includes clothing and shoes cooperatives that employ some 800 people, as well as subsidized supermarkets, clinics and pharmacies. Cornel West offered praise for the effort.

Dr. CORNEL WEST: No, this is amazing, no? (Technical difficulties) We need this in inner-city America.

ELLSWORTH: Hollywood actor Danny Glover was part of the trip as well. He says black residents of New Orleans were enthusiastic to hear that he was traveling to Venezuela.

ELLSWORTH: Venezuela's courting of poor populations comes at a time of diplomatic tensions between Washington and Caracas. The State Department accuses Chavez of violating democratic principles and destabilizing democracy in the region. But Chavez's effort to woo groups like Belafonte's delegation have also brought criticism from his domestic adversaries.

ELLSWORTH: Amalio Velmonte is a Venezuelan sociologist and a critic of Chavez. He says Chavez is simplifying Venezuela's racial dynamics to make his political platform more appealing abroad. He says even many black Venezuelans are uncomfortable with the idea that they are different from their whiter countrymen. At the same time, many criticize Chavez for providing subsidies abroad when millions of Venezuelans still live in poverty, though such criticisms are not slowing Venezuela's effort to build alliances in the US. And even Chavez's critics say his move to court minority populations and help pay their heating bills is a clever political challenge to the Bush administration. For NPR News, I'm Brian Ellsworth in Caracas.

GORDON: Thanks for joining us. That's our program today. To listen to the show, visit npr.org. NEWS & NOTES was created by NPR News and the African-American Public Radio Consortium.