Accessibility links
'Mad Money': Stocks with a Shtick Jim Cramer says he lost his soul making tens of millions of dollars for wealthy investors in the 1980s and '90s. His penance takes the form of an adrenaline-pumping, hour-long CNBC show, five nights a week. 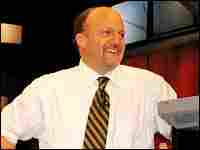 The sound effects for 'Mad Money'

Why Cramer likes to yell

Sound buttons on the set. Cramer uses sound effects to add to the show's energy and humor. 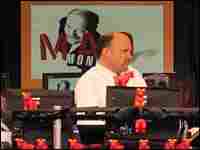 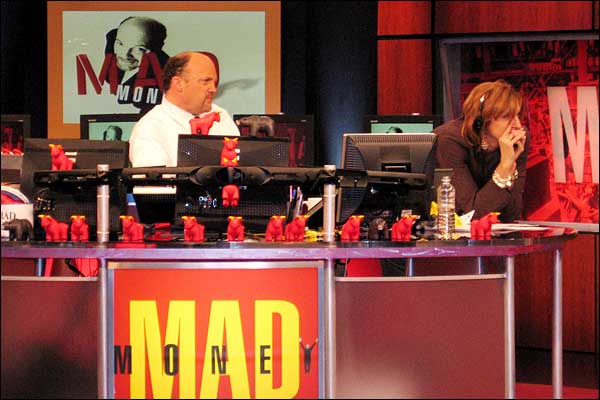 Cramer, Mad Money executive producer Susan Krakower (at right, in enlargement) and many, many red bulls on the set.

It was easy to get people to watch stock-picking shows on television back when the market was hot. But as the Dow cooled off, so did the audiences. To try to get people to pay attention again, CNBC has turned to Jim Cramer, a money man who bursts through the screen.

Cramer made tens of millions of dollars for wealthy investors in the 1980s and '90s, but at a huge cost. He says he lost his soul.

"I completely admit I was a slave... for rich people, for 20 years of my life," Cramer says. "And I did nothing for regular people -- nothing."

So now Cramer says he's making up for it. His penance takes the form of an adrenaline-pumping, hour-long CNBC show, five nights a week. He helps average investors understand the market, and he talks about stocks with all the subtlety of a boxing announcer.

At the CNBC studios in Englewood Cliffs, N.J., red and white signs on the show's set blare out its name: Mad Money. "You can't afford to miss it!" Cramer shouts at the beginning of the show.

He gleefully pummels buttons for sound effects: Glass breaking translates to an investor who is so despondent he's jumped out the window. The sound of a baby crying means "stop your whining" to petulant investors. The sound of a madman shouting "sell, sell, sell!" -- Cramer's own voice, naturally -- means what it says.

Cramer cultivates a fan base with the high-decibel familiarity of a sports radio host, and he has a lot of contempt for many so-called financial-planning experts

"What I'm doing now is a higher mission than what I was doing before," he says. "I'm trying to help people understand the market -- and it's something that I'm gifted at, because I'm a liberal arts guy. I'm not an economist."

He might not be an economist, but he's got credentials: an undergraduate and law degree from Harvard University. He was a trader at Goldman Sachs before founding his own renegade hedge fund. He later founded the online business journal TheStreet.com, and still writes a daily column.

He quit his hedge fund five years ago because he says he wanted to escape criticism that it compromised the independence of his journalism -- and ostensibly to lead a quieter life. But he pursued another kind of kick as he intensified his work on radio and television, and drove a lot of people nuts in the process.

Ten months ago, CNBC unleashed him onto the world with the debut of Mad Money, and right away he challenged his new bosses. "I am going to be in your face," he told them. "I am going to be throwing things, and if you don't like that, fire me."

Cramer keeps a blood pressure cuff in his modest office -- and he uses it, a lot. Each show, Cramer sweats through his shirt -- thanks in no small part to energetic features like the rapid-fire "Lightning Round."

Some critics say people who listen to him can lose their own shirts. New York Times business columnist Joseph Nocera has admired Cramer for years, but he's no fan of Mad Money.

"The people who are watching this and following the advice are fools," Nocera says. "It's great theater and it's great television, but it's not great investing."

Cramer himself is fairly honest about his shortcomings. Each week, he tells viewers which of his picks worked, and which failed. Regardless, Cramer's show has performed well for CNBC -- and the crazed Cramer has found his own patch of manic heaven.