Only Available in Archive Formats.
Hear Thursday's Wrap-Up as a Podcast

Scroll down to hear audio highlights from Thursday's hearings.

Supreme Court nominee Samuel A. Alito Jr. appeared headed toward confirmation Thursday after fending off repeated efforts by Democrats on the Senate Judiciary Committee to pin him down on divisive constitutional issues, including abortion and executive power.

Alito finished 18 hours on the witness stand shortly after noon on Thursday, with Republicans praising his performance and confidently predicting his confirmation. Democrats, meanwhile, criticized him for evading direct answers and several began to lay out grounds for voting against his nomination to succeed Justice Sandra Day O'Connor.

"We started these hearings seeking answers," Sen. Edward M. Kennedy (D-MA) said in a sharply worded prepared statement after wrapping up his questioning of Alito. "We come away with even more questions about Judge Alito's commitment to fairness and equal justice for all."

While talk of a filibuster to block the nomination had faded by week's end, the contrasting party-line perspectives on Alito will be put to the test next week when the 10 Republicans and eight Democrats on the panel are scheduled to vote on whether to recommend Alito's confirmation to the high court. Republican leaders hope that the full Senate will consider the matter before the end of the month.

Democrats say the Miers episode raises questions about the politics of his selection, and in the hearings, they voiced their strongest complaints about Alito's refusal under persistent questioning to give a clear statement about his views of the Supreme Court's key abortion rights decision, Roe v. Wade.

With slight variations, Alito answered consistently that Roe was entitled to respect as a legal precedent but he declined to call it "settled" law.

Several Democrats said Alito appeared to be leaving the door open to overturning or substantially modifying Roe if confirmed. Republicans discounted warnings that Alito's prior statements as a Reagan administration lawyer opposing a constitutional right to abortion signaled his likely vote if confirmed.

Democrats were also frustrated in their efforts to probe Alito's views about executive power, including the legality of President Bush's post-Sept. 11 program of domestic eavesdropping without judicial authorization. Alito said that he was required to give "no hints, no previews" about how he might rule on a future case.

Alito also faced sharp questions on two personal issues: his initial failure to step out of a case involving the financial services company where he has a six-figure mutual fund and his membership in a controversial conservative Princeton alumni group.

On the recusal issue, Sen. Kennedy echoed other Democrats' complaints when he said that Alito had offered "series of explanations" for his actions.

In his clearest statement on the matter, Alito acknowledged Thursday that it was "an oversight on my part" not to step out of the 2002 appeal of a case involving the Vanguard investment company. But he also said he rectified the problem by recusing himself later and asking for the appointment of a new appeals panel to hear the case.

"When the recusal issue was brought to my attention, I did everything that I could that nobody could come away with an impression that Mrs. Maharaj [the plaintiff in the case] got anything other than a completely fair appeal," Alito said.

Later, witnesses from the American Bar Association's Standing Committee on the Judiciary said the group found no reason to question Alito's ethics. "We accepted his explanation that he had simply made a mistake," said Washington, D.C., lawyer John Payton. The committee gave Alito its highest rating: "well qualified."

Democrats used Alito's membership in the now defunct Concerned Alumni of Princeton to question his views on diversity. The group -- which formed not long after Alito's graduation from Princeton in 1972 -- was widely known to oppose efforts to increase the number of women and minority students.

Alito listed membership in the group in a 1985 job application for a promotion within the Justice Department, but repeatedly told the committee he had no recollection of having been active.

After a brief flare-up between Kennedy and Judiciary Committee Chairman Arlen Specter (R-PA) on Wednesday, the committee asked for and received four boxes of papers of William Rusher, one of the founders of the group and a conservative journalist.

Senate staffers worked overnight to look for evidence of Alito's participation. Specter opened Thursday's proceedings by announcing that the papers, held at the Library of Congress, contained no mention of Alito's name, not even a canceled check to pay for a subscription to the group's magazine.

Democrats and a coalition of liberal interest groups have worked strenuously over the past 10 weeks to develop a case against Alito, mainly because of the high stakes of his nomination to succeed O'Connor. With the high court closely divided between conservative and liberal blocs, O'Connor has had a decisive vote on some of the highest-profile issues, including abortion, affirmative action, church-state relations and federalism.

Conservative interest groups have rallied around Alito, saying that his record in 15 years as a judge on the federal appeals court for his home state of New Jersey showed him to be meticulous, fair and respectful of legal precedent. In his opening statement on Monday, Alito, 55, said that he had "no agenda" other than "the rule of law."

In an unusual appearance, seven current and former colleagues of Alito's from the 3rd U.S. Circuit Court of Appeals endorsed his nomination in a joint appearance late Thursday. They uniformly described him as a fair and open-minded judge who decides cases without regard to personal views or preferences.

"The Sam Alito I have sat with is not an ideologue," said Edward Becker, a former chief judge of the Philadelphia-based court. "He's not a movement person."

The Road to Nomination

Alito's appointment to the appeals court in 1990 by the first President Bush came after 13 years as a government lawyer starting as an assistant U.S. attorney in New Jersey. From there, he became an assistant U.S. solicitor general -- where he won eight out of the 12 cases he argued before the Supreme Court -- and then deputy assistant attorney general in the Office of Legal Counsel.

In his 1985 letter applying for the Justice Department job, Alito identified himself as a conservative and criticized Supreme Court decisions on abortion, defendants' rights, church and state, and reapportionment. It was that application that raised so many questions at the hearings. Although Alito distanced himself somewhat from his comments, he did not flatly disavow them.

In 1987, Alito sought out appointment to the vacant position of U.S. attorney for New Jersey. The Senate confirmed him for the federal prosecutor's post and later for the federal judgeship without controversy and by unanimous consent. 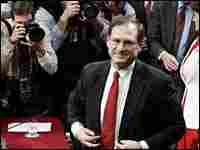 The first of 31 witnesses began testifying before the Senate Committee, including three representatives of the American Bar Association, which gave Judge Alito its highest ranking. A group of judges who have worked with Alito on the U.S. Court of Appeals also testified in support of his nomination, followed by three witnesses in favor of his nomination and three opposed. The favorable witnesses tended to speak about Alito's character while the negative witnesses focused on his past judicial opinions.

Testifying by video-conference from California, Judge Leonard Garth of the 3rd Circuit Court, for whom Alito clerked from 1976-77, says Alito is not "revolutionary," and is not influenced by personal preferences.

Judge Maryanne Trump Barry and Judge Timothy Lewis, both of the 3rd Circuit Court, say they have never sensed any hostility toward women or civil rights from Alito.

Edna Ball Axelrod, former Chief of the Appeals Division, U.S. Attorney's Office, New Jersey, says she is a lifelong Democrat who supports Alito, and that Alito does not pursue personal agendas.

Supreme Court nominee Samuel Alito fielded questions almost exclusively from Democrats during his final day of public testimony before the Senate Judiciary Committee. Alito was pressed on right-to-die and death penalty cases, the limits of presidential authority and other issues, but rarely gave more than general answers that avoided his personal views.