Accessibility links
Christian Leaders Balk at Robertson's Remarks When the TV evangelist ran for president in 1988, he gained a following that appreciated his vision of moral certainty. But Robertson's recent suggestions that Israeli prime minister Ariel Sharon's stroke and the Sept. 11 terrorist attacks were acts of divine retribution have made even his allies uneasy. 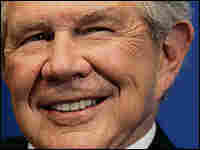 Pat Robertson, founder and chairman of the Christian Broadcasting Network, before a speech at the National Press Club in February 2005. Win McNamee/Getty Images hide caption

Robertson on the News

On his show, "The 700 Club", Christian preacher Pat Robertson often delivers commentaries on the news of the day. Below, video excerpts from a few of Robertson's remarks:

The Israeli government has taken the unusual step of cutting all ties with an American preacher, the television evangelist Pat Robertson. The move came after Robertson's comments last week about the massive stroke suffered by Israeli Prime Minister Ariel Sharon, who remains gravely ill. Robertson has been working to set up a massive Christian tourism center in Israel, and that deal is now in question. Robertson's statement is the latest in a string of pronouncements that have left Robertson isolated from other conservative Christians.

Robertson has told viewers of his television show, The 700 Club, that he personally likes Ariel Sharon. In fact, Robertson said he's even prayed with him. But the preacher said Sharon made a mistake when he pulled out of the Gaza Strip, and so, he implied, no one should be surprised that Sharon fell ill.

"Here he's at the point of death," Robertson told viewers in early January, "he was dividing God's land. And I would say, woe unto any prime minister of Israel who takes a similar course to appease the E.U., the United Nations or the United States of America. God says, 'This land belongs to me. You better leave it alone.' "

Today, Robertson apologized, but the damage was done for some Christian leaders.

"I was appalled," says Richard Land, president of the Southern Baptist Convention's ethics and religious liberty commission. Besides the insensitivity, Land says, this is bad theology. Saint Paul himself wrote that "God's judgments are unsearchable." When Robertson connects Sharon's stroke with God's judgment, "he's way beyond his theological pay grade," Land says. "That's assuming the prerogatives of God and it betrays both an appalling spiritual ignorance and an appalling spiritual arrogance."

Those are tough words from an evangelical leader who long fought on the same side as Robertson in the culture wars. In fact, not so long ago, Robertson was swimming in the conservative evangelical mainstream. When he ran for the Republican nomination for president in 1988, he energized evangelicals who had never entered politics.

For a segment of people worried about the country's moral direction, candidate Robertson offered a vision of moral -- that is, Christian -- certainty.

"As a people," Robertson said in a campaign speech in 1988, "we believe our freedoms, our liberties, and our wealth were gifts of almighty God, and we must establish faith in God as our no. 1 priority."

This was a softer, gentler Robertson, and his campaign caught fire. He polled second in the Iowa caucuses, beating out then Vice President George Bush. Robert Boston, a critic of Robertson's who authored a book about the televangelist called, The Most Dangerous Man in the America?" says underneath the mainstream patina, Robertson held extreme views.

"When he was running for president in 1988, he had staff, he had handlers, he had people who could pull him back when he went too far out on the limb," says Boston.

Eventually, he says, Robertson's past statements caught up with him, such as his predictions that the Soviet Union would invade Israel, and that Jesus would soon return. The campaign quickly crumbled. But the softer tone continued into the 1990s, when Robertson founded the Christian Coalition -- a grass roots machine that would change the course of American politics. Boston says, even then, Robertson remained quietly in the wings, choosing a baby-faced, sophisticated Ralph Reed to be the voice of the movement.

"Well, Ralph Reed is long gone," notes Boston. "He resigned in September 1997. So almost for the past 10 years, there's not anyone telling Pat Robertson, 'Be quiet, you're not helping us, you've gone too far.' "

Eventually, Robertson's main outlet became his television program, The 700 Club. The program became a showcase for his particular take on Pentecostalism, a tradition whose followers believe that God speaks directly to people and influences events.

Unleashed from the constraints of politics, Robertson warned his listeners that God was unhappy with the cultural drift. On June 8, 1998, he warned that a gay pride celebration in Orlando would invite terrorist bombs, earthquakes, tornados and even a meteor:

"I would warn Orlando that you're right in the way of serious hurricanes, and I don't think I'd be waving those flags in God's face if I were you," he told viewers.

That prediction became fodder for late night television jokes. Christian leaders grew increasingly embarrassed. Eventually, Robertson would drive even Christian allies away, with his comments two days after the Sept. 11 terrorist attacks. Homosexuality, the ban on school prayer, abortion and other social ills, he seemed to imply, invited the death of 3,000 people:

"We have insulted God at the highest levels of our government, and then we say, why does this happen?," said Robertson. "Why it's happening is, God almighty is lifting his protection from us."

Since then, Robertson's tempo has increased. Last August, he made this comment about Venezuela's President Hugo Chavez:

"I don't know about this doctrine of assassination, but if he thinks we're going to assassinate him, we ought to do it, it's a whole lot easier than starting a war."

Three months later, Robertson turned his prophecy to the town of Dover, Pa., which voted out a school board that favored introducing intelligent design into science class.

Robertson told viewers: "I'd like to say to the good citizens of Dover, if there is a disaster in your area, don't turn to God. You just rejected him from your city."

"I don't know a religious conservative leader -- Protestant, Catholic or Jewish -- who has not run out of patience with Mr. Robertson's comments," says Michael Cromartie, director of an evangelical studies project at the Ethics and Public Policy Center. Cromartie says Robertson speaks for an ever diminishing group of people -- and gives a bad name to evangelicals by presenting a wrathful God of judgment, not mercy. He points to the comments Robertson made after Sept. 11.

"It is really dangerous when religious leaders come out and try to tell us exactly what God is up to," he says. "This is inappropriate theologically, as a Christian leader. Now what you want to do is fall on your face and say, 'God have mercy on us and help those suffering people who lost their families.' "

Cromarties and others say Robertson is also damaging America abroad -- especially among those in the Muslim world who fear that America is on a crusade to Christianize the world. Critic Robert Boston says U.S. policymakers are so careful to keep religion out of foreign policy, "but their efforts are being undercut when people like Pat Robertson make comments about Islam that are inflammatory, or link our public policy to the spread of Christianity, and imply that this something that is a national goal for the U.S. overseas."

Some view Robertson as a tragic case, whose odd comments have destroyed any impact he may have had. Rob Boston disagrees. Boston says when Robertson's biography is written, those comments will be a footnote -- his real legacy is that he helped create a movement that changed American politics.

"People will remember him as the architect of a political movement, and after Pat Robertson is gone, there will still be people active in the political system who learned their lessons from his organizations and his writings," says Boston.

A legacy that makes liberals shudder, and conservatives rejoice.