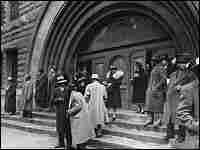 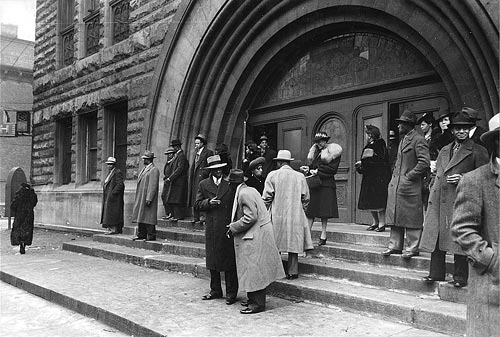 In front of Pilgrim Baptist Church on Easter Sunday, April 1941.

Music in this Story

'I Don't Feel Noways Tired' - The Rev. James Cleveland, from 'The Lord is My Light'

'It's Gonna Be Too Late' - The Rev. James Cleveland, from 'The Love of God' 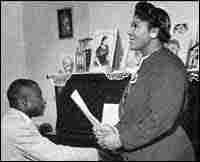 The Pilgrim Baptist Church's destruction by fire last week was a tragic loss to worshipers in Chicago's South Side. But the blaze also gutted a historic landmark that gave birth to gospel music.

"This is the mother church of an entire genre," says Robert Darden, author of People Get Ready! A New History of Black Gospel Music.

The building was designed in 1890 as a synagogue by architects Louis Sullivan and Dankmar Adler. The outside bore their trademark archway entrances. The inside featured a soaring ceiling, pillars accented with gold, and wooden pews.

It became a church during the great migration, when millions of black Southerners headed to Chicago, bringing along their musical traditions.

Among them was Pilgrim's longtime music director, Thomas A. Dorsey, who wrote "Take My Hand, Precious Lord" and hundreds of other gospel tunes. Gospel artist and preacher James Cleveland got his start at the church, singing in the choir as a child. And Mahalia Jackson is among the artists who lived in the area, collaborated with Dorsey and frequently sang at Pilgrim.