Accessibility links
Derek Luke on 'Glory Road' Actor Derek Luke, star of the new movie Glory Road, talks about his career and his new film, about the the true story of the first college basketball team to start five black players. The 1966 Texas Western team went on to win the NCAA championship.

Actor Derek Luke, star of the new movie Glory Road, talks about his career and his new film, about the the true story of the first college basketball team to start five black players. The 1966 Texas Western team went on to win the NCAA championship. 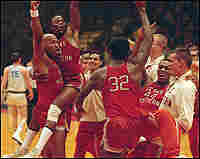 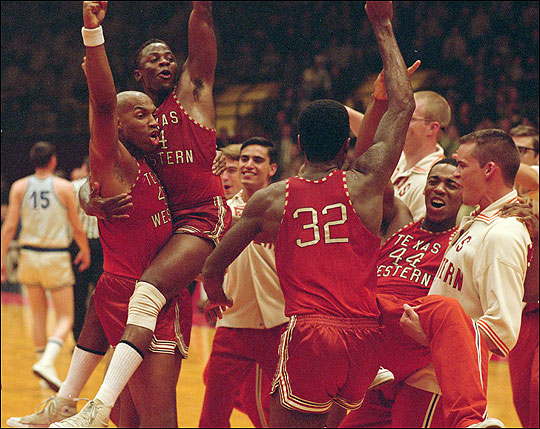 Derek Luke celebrates national championship win in a scene from the new film.

True stories can sometimes be the most inspirational. Take the real-life tale of the 1966 Texas Western Miners basketball team. It boasts of having the first all-black starting five to play in NCAA history. A new movie, "Glory Road," gives voice to the trials and triumphs of that trailblazing team, and there's also the true story of Derek Luke, one of the stars of the film. Luke is best-known for his performance in the critically acclaimed film "The Antwone Fisher Story." After starring in that movie, Luke went from complete obscurity to a thriving career in Hollywood.

Mr. DEREK LUKE (Actor): Every time I get to tell the story about my glory road, that, you know, it's--it just refurbishes the fire, you know. And it is like a dream. Sometimes I try to make it very workful and, like, very complicated, but when I just sit back a little bit and look at it, it's--man, it just makes me smile.

GORDON: Talk to those who may not know your story in terms of how you were, quote, "discovered."

Mr. LUKE: Well, I moved from Jersey to LA and--where I got a job working in a gift shop. It was on the Sony Pictures lot in Culver City, and primarily my purpose to live in LA was to pursue my dream as an actor. So having no manager, no agent, you know, I just was basically networking with people that I met. You know, I worked there, 9-to-5 job, and one day I was invited to lunch by a mutual friend that happened to know a writer by the name of Antwone Fisher. I just listened to this guy speak, and when I was listening to him, he just said, `Yeah, you know, I have a script,' and, you know, he really didn't have my attention. Then he says, `Hey, man, but Denzel's going to direct it.' I was like, `Direct it? Get out of here!' I was like, `Man, I gotta read this story.' And so basically I ended up auditioning for this show five times.

And, you know, I'm working in the Sony lot after the audition and it's a month later, and the real Antwone Fisher is in there shopping. And as I'm walking him out, I see Denzel Washington out of the corner of my eye and I'm like--I turn real quick 'cause I'm like, man, I don't want Denzel to think I'm stalking him, 'cause the auditions was held on the Sony lot. And I turn back and I just--you know, I'm trying to play it off. And as soon as I turn back and look forward to see him passing, he's in my face. And he says, `Hey, you,' he says, `you're Antwone. I just hired you today. You're my new Antwone Fisher, the lead in my film.' I was like, `Oh, my God, man!' I kissed him, I hugged him, I did everything, man. That's how I came to be a part of "Antwone Fisher." And thanks to that, man, it's branched me off to a career right now.

GORDON: Let's talk a little bit about the new film, and that's "Glory Road." This is a story of the 1966 Texas Western team...

GORDON: ...which took on the University of Kentucky. And Adolf Rupp, who is a basketball legend and certainly down there a basketball god, if people will allow that term. And the first time that we see an NCAA final tournament an all-black team take on an all-white team during a time and in a state that still was very staunchly segregated to a great degree. The irony here is one of the men who've become a basketball icon of late over the course of the last 20, 25 years, Pat Riley, was a part of this team. Talk to me about whether you knew anything about this before taking the role on and, if not, what it meant to you to find out about this story.

Mr. LUKE: No, I never heard of the story about the Texas Western team in 1966. And what I love about it was just like how this particular group of guys--they happened to be black men--came out of nowhere, you know, and was ordinary men and beat the whole system. You know, people that was never even considered to survive and to compete competed at the highest level and won. And I love that story 'cause it's pretty much like mine.

(Soundbite of trailer for "Glory Road")

Unidentified Man #1: ...the incredible story of the team that changed the game forever.

Unidentified Man #3: Thank you for getting us together. No matter what the obstacles.

GORDON: It's told through the eyes of Don Haskins, the white coach that was head of Texas Western, and what he had to quite frankly put up with being a white man coaching an all-black team and readying them for the tournament. And again, no small feat in 1966. How much did you learn about race relations?

Mr. LUKE: I mean, there was a lot. I liked when the real player Nevil Shed--the way he puts it. He was just like, `We were playing for our dignity. We were playing for just being men. And, you know, the other team, you know, they could have perhaps taken that for granted.' You know, so when they--I think it gives you more appreciation about what you have about playing for something more than just a game. It's bigger than the contract. It's bigger than money. You know, at least it was for me. So everybody else--anybody else will have to make their own calculation of what the film, what the story means to them.

GORDON: Were you an athlete in high school?

Mr. LUKE: Man, mentally. Mentally I was, but not physically, man.

GORDON: Was it hard for you to be in high school and know that you wanted to be an actor? Did you have to kind of depress that thought at times?

Mr. LUKE: Oh, man, I think that's where I learned how to act, you know. That's where--because I became other people. You know, I became everything I wasn't, you know, when I was in school, you know. I became a gangsta when I had to walk the street. You know, it was called ghetto pass; you gotta walk past the drug dealers to get home, so you better turn to somebody else, especially when your parents are church people. As a matter of fact, I used to take--I took my grandmother's purse and I took the chain off it and made it into a gold chain, tied it in the back with a little bobby pin. You know what I'm saying? And I will walk--and I will put a little lotion on it so it can shine, you know what I mean? So that was my ghetto pass to get by. So that's where I perhaps learned how to--you know, a little acting, because I've almost met every character on the block, you know. And so it was a challenge.

GORDON: It's also a point particularly with the basketball issue of it that if you got no game...

GORDON: ...then you don't want to come outside, either.

GORDON: Well, we look forward, man--as I told you when I first met you and I saw you in "Antwone Fisher" and that being your debut for us, the fans, you did a remarkable job in that, and I've liked all of your work, man. And we hope that there's more to come. The new film is "Glory Road," and if you want to see what kind of game Derek got, you can tune it right in...

GORDON: Good talking to you, man.

GORDON: To listen to the show, visit npr.org. NEWS & NOTES was created by NPR News and the African-American Public Radio Consortium.