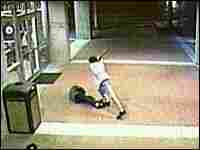 One of the beating suspects swings a baseball bat at a homeless man on the campus of Florida Atlantic University. The man survived but remains hospitalized in serious condition. Fort Lauderdale Police Video Still hide caption

Police in Fort Lauderdale, Fla., are looking for a group of men who brutally attacked several homeless people early Thursday morning. Two of the victims remain hospitalized in serious condition. A third, 45-year old Norris Gaynor, died from his injuries.

Police described the assailants as a group of young white males and say they used baseball bats and sticks to beat homeless men sleeping in three separate locations. The brutality of the attacks -- one of which was captured on surveillance video -- has stunned the city, which has recently won praise for its treatment of the homeless. The incidents have also renewed calls to make attacks against the homeless a hate crime under federal law.

In the video, two young men are seen beating a homeless man, who tried in vain to fend off the attacks with his hands. "If you looked at these kids, it is almost like it was fun and games for them," says Scott Russell, a Fort Lauderdale police officer. "It looked like they were laughing and finding great joy in what they were doing."

Fort Lauderdale police spokeswoman Katherine Collins, speaking to the CBS affiliate in Miami, says the attacks were unprovoked. "There was no confrontation prior to the incidents," she says. "They seem to just have come out and started beating them immediately."

The videotape has provided police with valuable clues, and they're confident they will make arrests soon. Meanwhile, police and advocates for the homeless have fanned out across the Fort Lauderdale area, distributing fliers about the beatings and urging the homeless to go to shelters or sleep in well-lit public areas.

Nationwide, attacks against the homeless are on the rise, nearly doubling from 1999 to 2003. In the past six years, at least 156 homeless people have been murdered, according to the National Coalition for the Homeless. Most of the assailants are young men in their teens to early 20s.

"In many of the cases, it's a crime of opportunity," says Michael Stoops, the coalition's acting executive director. "A group of teenagers is roaming the street on a hot summer night and they come across a homeless person who might be mentally ill or alcoholic. When they hurt a homeless person, they think they can get away with it -- and they think they won't be hurt in return."

Stoops places part of the blame for these attacks on videos, some available on the Internet, that show homeless people being beaten -- or in one case, set on fire Advocates for the homeless have been pushing to make such attacks a "hate crime" under federal law.

"If there is any good to come out of evil," says Stoops, "then perhaps this video taped beating will be similar to the Rodney King video and make Americans realize that we need to get the federal government to do something. Because this is definitely going on in all cities around the country."

Latest on Beating Story at Sun-Sentinel.com