Accessibility links
Duranguense: Mexico Meets the Midwest The popularity of Duranguense music has made the link between Chicago and Durango, Mexico, more visible. But the connection is deeper than most creators and fans of the music know. 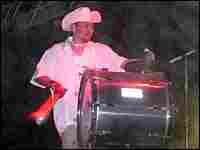 The tamborazo drum, a popular instrument during the Mexican Revolution, is the heartbeat of Duranguense music. Melissa Giraud hide caption 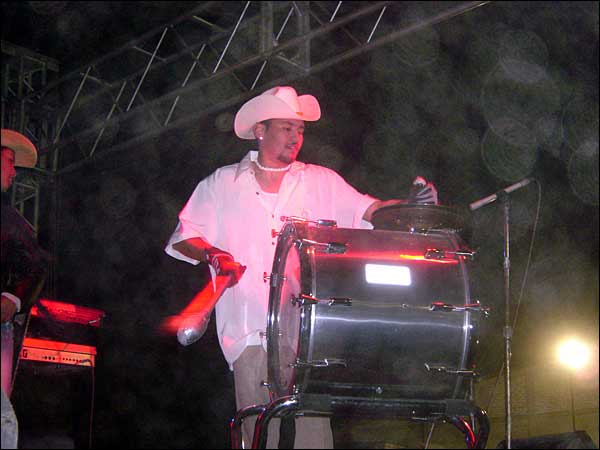 The tamborazo drum, a popular instrument during the Mexican Revolution, is the heartbeat of Duranguense music. 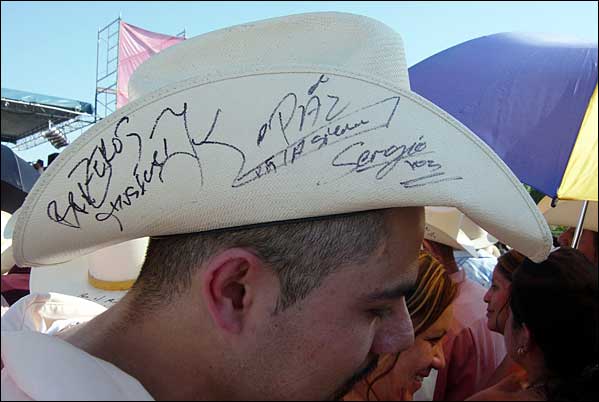 In Chicago, thousands gather every weekend to listen and dance to music about rural Durango. Melissa Giraud hide caption 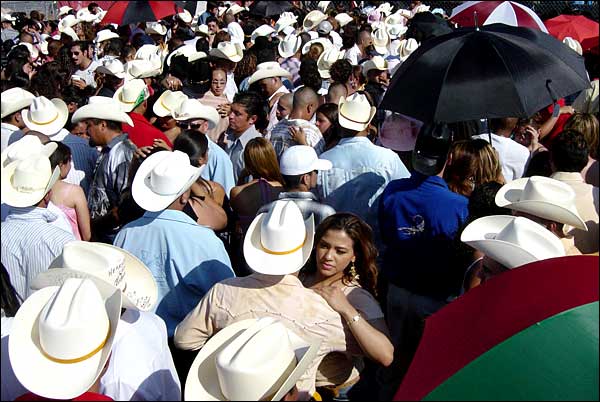 In Chicago, thousands gather every weekend to listen and dance to music about rural Durango.

A new musical style has come in from the farther reaches of the Mexican community and taken the industry by surprise: Duranguense.

Though most homegrown Spanish-language music comes from California or Texas, Duranguense is based in Chicago and is inspired by one of Mexico's least populated states, Durango. Still, its popularity is central: As many as five of the top 10 spots on Billboard's Latin charts in the past year have belonged to the genre.

In and around Chicago, there's a kind of Durango fever visible at the record store. Kids pass over their once-favorite rap artists for Duranguense CDs.

Still, many of the music's fans know little about the actual region. Durango's stark, mountain countryside may be familiar only as a movie landscape to many, since it forms the backdrop of such old Westerns as The Sons of Katie Elder, starring John Wayne.

Aficionados embrace Duranguense's rough-and-tumble provenance by dressing the part: Young men frequent Western-wear shops for chunky buckle belts, cowboy boots and the requisite sombrero. The outlaw is a running theme in the songs, where musicians make subtle references to the drug trade.

Durango's connection with Chicago was forged in the early 20th century, when Midwestern railroad companies lured workers from the state that had the most railroad development before the Mexican Revolution, according to historian Javier Guerrero.

The population of Durango has declined, but its borders have expanded to include a community in Chicago and surrounding towns. It's a community you won't find on any map, but must listen for: Durango, Illinois.

This piece is part of a larger project called OchoTEEN, produced by Melissa Giraud and edited by Julie Subrin.

An Early Hit: 'Camino a Tepehuanes'

"Camino a Tepehuanes" ("Road to Tepehuanes") by the group Montez de Durango, is the song that kicked off the Duranguense movement in Chicago (hear it above). The song is about a man on a road trip who goes deep into the Mexican countryside, and high up, to the mountaintop town of Tepehuanes. He describes the view as his truck climbs the road connecting neighboring mountain villages. He tips his hat to the people he passes and stops to let school children cross. He's returned home to the northern state of Durango after many years away. Here, he sings, there’s a friend behind every door.

Chicago has the largest population from Durango stateside. Many Duranguenses in Chicago come from tiny mountain towns like the ones mentioned here, and they idealize the small town life remembered in this and other Duranguense songs.
-- Melissa Giraud