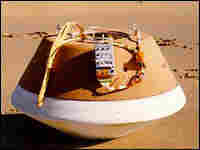 As it flew by Earth, the Stardust spacecraft jettisoned its collection of comet particles. Parachutes helped ease the capsule, similar to the one shown here, to its landing in the Utah desert. NASA/JPL-Caltech hide caption

The Stardust probe was designed to capture two types of space dust. Inside its collector, scientists hope to find thousands of Wild 2 cometary particles, which date back to the origins of the solar system some 4.5 billion years ago, but also a sprinkling of dust from distant stars, perhaps created in supernova explosions less than 10 million years ago.

Once the landing capsule is in the lab, NASA plans to search through the comet particles itself, but the space agency and University of California, Berkeley researchers are asking for volunteers to help search for the submicroscopic grains of interstellar dust.

NASA will digitally scan the aerogel, in which the particles are trapped, and has built a Web-based microscope that volunteers can use to search through the images. There may only be as few as 45 space particles in the gel, and NASA estimates it will take some 30,000 hours to find them.

You can sign up for the project at http://stardustathome.ssl.berkeley.edu. 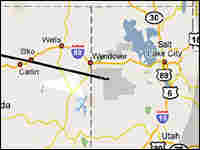 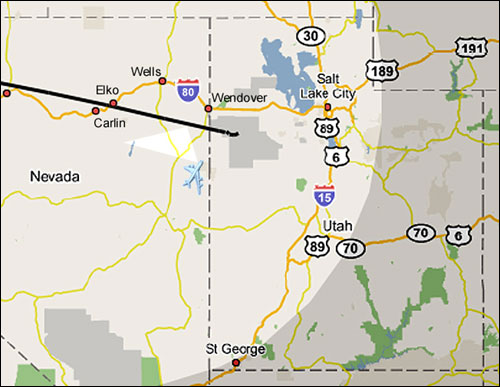 DUGWAY PROVING GROUND, Utah (AP) - After a seven-year journey, a NASA space capsule returned safely to Earth on Sunday with the first dust ever fetched from a comet, a cosmic bounty that scientists hope will yield clues to how the solar system formed.

The capsule's blazing plunge through the atmosphere lit up parts of the western sky as it capped a mission in which the Stardust spacecraft swooped past a comet known as Wild 2.

"This is not the finish line. This is just the intermediate pit stop," said project manager Tom Duxbury of the Jet Propulsion Laboratory in Pasadena, Calif., which managed the $212 million mission.

About a million comet and interstellar dust particles -- most smaller than the width of a human hair -- are believed to be inside a sealed canister.

The particles are thought to be pristine leftovers from the birth of the solar system about 4.5 billion years ago. Some samples could be even older than the sun.

The next stop for the capsule is the Johnson Space Center in Houston, where scientists will unlock its canister later this week.

After a preliminary examination, they will ship the particles to laboratories all over the world for further study to analyze their composition.

"Inside this thing is our treasure," said principal mission scientist Don Brownlee of the University of Washington.

Stardust's successful return was welcome news to the space agency, which suffered a setback in 2004 when its Genesis space probe carrying solar wind atoms crashed into the same Utah salt flats and cracked open after its parachutes failed to deploy.

Early Sunday, the Stardust mothership released the shuttlecock-shaped capsule, which plunged through the atmosphere at 29,000 mph.

The first parachute unfurled at 100,000 feet, followed by a larger chute, which guided the capsule to a 10-mph landing at Dugway Proving Ground. There was a tense moment in mission control when engineers could not immediately confirm the first parachute had opened.

Before coming to rest on its side, the capsule bounced three times but didn't crack, said Joe Vellinga of Lockheed Martin, who helped lead the recovery.

Scientists in white protective suits spent the day cleaning the capsule and its canister of dust samples before the trip to Johnson Space Center. It will be days before engineers learn how well the capsule's heat shield held up during the fiery re-entry.

The Stardust mothership remains in orbit around the sun and NASA is considering sending it to another comet or asteroid to snap photos. There won't be another chance for a sample return, however, because the craft carried only one capsule.

Stardust and Genesis were the first robotic retrievals of extraterrestrial material since the unmanned Soviet Luna 24 in 1976, which brought back lunar rocks and soil.

The Stardust spacecraft was launched in 1999 and has traveled nearly 3 billion miles, including three loops around the sun.

In 2004, it survived a hazardous trip through the comet's coma, a fuzzy halo of gas and dust, to snatch the cosmic dust with a tennis racket-sized collector mitt. Along the way, it also scooped up interstellar dust -- tiny particles thought to have been thrown out by stars that long ago exploded and died.

During the comet flyby, the spacecraft also beamed back 72 black-and-white pictures showing broad mesas, craters, pinnacles and canyons on the surface of Wild 2.

Six months ago, NASA sent the Deep Impact probe into the path of another comet. The probe's high-speed collision with comet Tempel 1 set off a celestial fireworks display and bared the comet's primordial interior.

Scientists have been analyzing the voluminous debris hurled from the comet and are trying to figure out the size of the crater caused by the debris-shrouded impact.