Accessibility links
Classic Black Films Stand as History, Art Film critic Bob Mondello reviews the DVD release of three classic black films: Hallelujah, Green Pastures and Cabin in the Sky. He says they are interesting, both as history and as works of art. 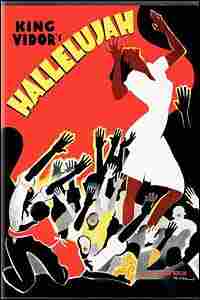 In 1929, MGM released Hallelujah, the first all-black feature to be made by a major movie studio. In the years immediately following, in a largely segregated America, there would be other all-black movies -- known in the trade as "race films."

This week, Hallelujah and two pictures that came after it, The Green Pastures and Cabin in the Sky, are released on video.

The DVDs all begin with a legend you cannot fast-forward through. It says: "The films you are about to see are a product of their time. They may reflect some of the prejudices that were commonplace in American society, especially when it came to racial and ethnic minorities. Those depictions were wrong then, and are wrong today. These films are being presented as they were originally created because to do otherwise would be the same as claiming those prejudices never existed."

And with that, the films begin. Stereotypes are everywhere, but also, especially in the case of Hallelujah, powerful images are everywhere too -- starting with a long line of stooped figures picking cotton. The black-and-white images look so real today, they could be mistaken for documentary footage.

In "silent" films, whites had mostly "played" black characters in blackface, a tradition Al Jolson brought to talkies when he sang "Mammy" in the The Jazz Singer. But Hallelujah was different. Black audiences could see and, for the first time, hear themselves on screen. That proved revelatory, even when the plots traded heavily in stereotypes.

Being an all-black film limited Hallelujah's box office prospects, but it did better than the studio expected, and established -- with a mix of music, down-home characters, and religion -- that the genre known as "race films" could make money for the big studios. The other two movies in the DVD set followed its pattern. From the '30s, there's The Green Pastures, a Pulitzer Prize-winning folk-drama that brought bible stories to life. Then there's 1943's Cabin in the Sky, a musical with comedian Eddie "Rochester" Anderson from Jack Benny's radio Show and the great Ethel Waters as his adoring wife.

The films are sensitively packaged here, with commentaries by black cultural scholars and with shorts featuring other African-American talent from the era, including an already amazing seven-year-old named Sammy Davis Jr.

The richness displayed on these DVDs would be remarkable even for entertainments made without constraints, in a studio system that didn't denigrate and condescend to its black performers. But as the films demonstrate, talent is talent. It was possible, even working against terrible odds, to achieve a level of art.