Accessibility links
Austria to Return Paintings to Jewish Heir The Austrian National Gallery is being compelled by a national arbitration board to return five paintings by Gustav Klimt to a Los Angeles woman, the heir of a Jewish family that had its art stolen by the Nazis. The paintings are estimated to be worth at least $150 million.

The Austrian National Gallery is being compelled by a national arbitration board to return five paintings by Gustav Klimt to a Los Angeles woman, the heir of a Jewish family that had its art stolen by the Nazis. The paintings are estimated to be worth at least $150 million. 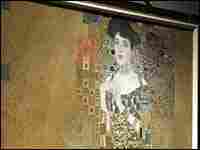 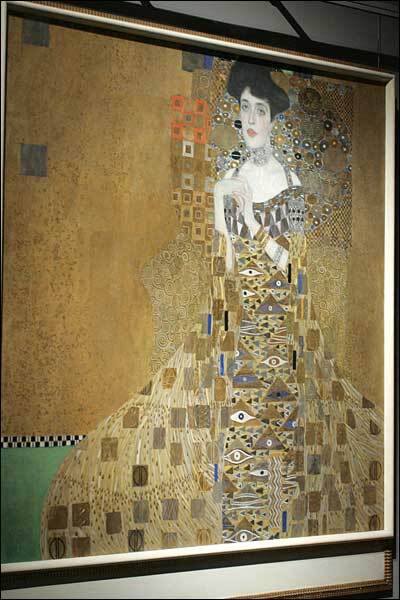 The painting "Adele Bloch-Bauer I" by Gustav Klimt hangs in Austria's Belvedere Gallery in Vienna, Jan. 17.

The Austrian National Gallery is about to lose one of its most well known works of art, a portrait by Gustav Klimt. An Austrian Arbitration Board has decided that this painting and four others by the artist were wrongfully taken during the Nazis during World War II, and rightfully belong to an 89-year-old Jewish woman now living in California. From Los Angeles, NPR's Luke Burbank reports.

If you've spent any time in either a poster shop or a university dormitory, you've probably seen the work of Gustav Klimt. His many well known paintings, including The Kiss and The Virgin tend to feature women surrounded by swirling shapes and brilliant colors. Like many people, Maria Altman has a print of a Klimt painting hanging on her wall. Unlike others, her family once owned the original.

Ms. MARIA ALTMAN (Family owned original Klimt painting): I lived with it hanging in my auntie's house, so I grew up with it.

BURBANK: The painting in question is a portrait of Altman's aunt, Adele Block-Bauer, looking demure as a mosaic of gold nearly envelopes her. The Block-Bauers were one of Vienna's leading Jewish families in the early 1900's. As a child, Altman says, she was always a little intimidated by her now famous aunt.

Ms. ALTMAN: She was very intellectual. She lived for books, university, artists. She had a lot of what they called salons at the time, you know.

BURBANK: Salons that often included the Austrian painter, Gustav Klimt, who was also hired to paint Adele Block-Bauer's portrait. The family ended up with five Klimt paintings in all, hung in places of honor around the house. That is until the Nazis arrived. The home, the cars, family businesses, and jewelry, everything was taken. By this time though, Maria Altman was married and says she had bigger worries than the paintings.

Ms. ALTMAN: When Hitler was there and my husband was sent to the concentration camp, I mean, I couldn't care less about artwork. So then I had lost total contact with it.

BURBANK: The family ended up in the U.S. and Canada, the paintings in Austria's National Gallery, where they've been considered national treasures for the past half century. Throughout the years, the Austrian government has maintained that the paintings, worth an estimated $150 million, were rightfully donated to the gallery, based on Adele Block-Bauer's will. Altman disagreed and called her friend's grandson, Attorney Randall Schoenberg for help.

Mr. RANDALL SCHOENBERG (Attorney): I knew that the paintings were super-famous, and I had known about them since I was a little kid.

BURBANK: Using a 1998 Austrian law that ordered museums to review their holdings for any work seized by the Nazis, Schoenberg argued parts of the case all the way to the U.S. Supreme Court. He won. And both sides eventually agreed to turn the whole matter over to an Austrian arbitration board. That board released its decision this week, ruling that the paintings are the rightful property of Maria Altman. Looking up at her aunt, Altman thinks, this is how Adele Block-Bauer would have wanted it.

BURBANK: Altman isn't sure what she'll do with the paintings once they're in her possession. More than likely, they'll end up in another museum somewhere. She has no plans to adorn her living room with the original portrait of her aunt, which alone is worth about $100 million. She says the print she's had on display since the 1950's looks just fine. Luke Burbank, NPR News, Los Angeles.