Accessibility links
Dinner in the Fireplace Cooking a steak right on the wood coals in your fireplace will surely put a bit of sizzle in your evening -- not to mention a delicious steak on your table. Food writer Betsy Block explains how.

Dinner in the Fireplace

Dinner in the Fireplace 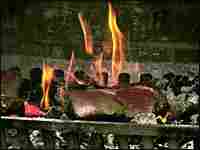 Throwing the meat right on the coals feels reckless, exciting, even sexy --- and it makes a delicious meal, too. Instructions follow. Betsy Block hide caption 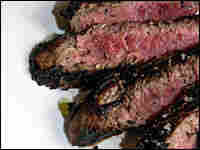 I'm opening the fireplace screen door, and now I'm putting the steak in the fireplace, right on top of the embers. On tonight's menu: Dirty Steak, or steak cooked on wood coals.

As with so many great culinary discoveries, this one was an accident. Johanne Killeen and George Germon, co-owners of the famed Al Forno in Providence, R.I. first put it on their menu in 1985. Killeen says that one very busy night at the restaurant, Germon unknowingly dropped a steak in the fire. When he finally found and tasted it, a dish was born.

Of course, cooking meat on a fire is as old as -- well, as old as fire itself. But for those of us who aren't in the Scouts or living on the range, it's one of those ideas that's new all over again.

Ever since I first heard of Al Forno's Dirty Steak, I've been looking forward to trying it. It sounded dramatic, exciting, sexy even -- and finally, the night to make it had arrived. So I bought the meat and got out my checklist: Cord of wholesome hardwood, delivered and stacked (by me)? Check. Extra-long tongs? Check. Salad? Chocolate cake for dessert? Ready and waiting.

Earlier, a friend had come over to share this momentous occasion with us, and as the three of us waited for the fire to die down a little, somehow our discussion turned to couples she knew who'd "fallen out of love." As I listened to her tales of heartache -- and a searing story of midnight calls from a desperate married man -- I kept an eye on the fireplace. Soon I saw that the wood had burned down to what I thought was the right size. Stories of infidelity had to take a back seat to dinner.

At first I had a lot of questions and self-doubt: Are the coals too small? Is the fire too big? And what, exactly, does "falling out of love" mean? I opened the fireplace screen door and nervously placed the steaks right on the coals.

They popped and crackled -- a little, anyway -- but there was no huge blaze of flames, no fireworks. How disappoint-- I mean, different from what I'd expected. As the steaks hissed, we resumed our talk of lives upended by affairs and divorce.

Fifteen minutes later, after both cooking and resting, the steak was ready to eat. I took it into the kitchen, cut into it, and saw, with relief, that it was gorgeous: charred on the outside, red and glistening inside.

That first tentative bite revealed a smoky, tender and perfectly cooked steak: restaurant-quality, without a doubt. Plus, it had been fun and surprisingly easy to make.

But by no means was it -- you know -- breathtakingly good. It didn't taste, say, like a lustful, illicit encounter in a hotel room. What I mean to say, then, is that it wasn't passion on a plate, as I'd imagined. But it was good. It was more than good. It was utterly delicious. Just not like that.

No, Dirty Steak wasn't quite what I'd expected, or maybe even hoped for. But it turned out to be just what I'd needed on this midwinter, midlife night. It may have cooked quietly, but it still sizzled.

After we pulled the steaks out, we threw a couple more logs on and ate in front of a blaze. I knew then that even if the fire almost dies out sometimes, as long as there's still at least a small flame, we can always rekindle it.

At home, we cook steak in our fireplace by burning down the cord wood (maple, oak and ash) to large embers -- roughly the same size as lump hardwood charcoal. The size of the fire depends on how many steaks we're going to cook, but we are not blazers. A small, controllable fire is George's ideal.

We use boneless ribeye steaks -- sirloin works as well -- about 1-1/2-inches thick (don't trim the fat off until after it is cooked). The steaks should be at room temperature, so take them out of the fridge about one hour in advance. They should be bone-dry, with no moisture at all on them. Any blood or moisture will cook to a livery taste and allow the ashes to stick to it.

When the embers are ready, knock off any ash with a poker so the embers glow bright red. Gently lay the steaks directly on top of the coals. They will sizzle and smoke. Cook 3 to 5 minutes per side for a rare steak -- you have to gauge how hot your fire is -- not an exacting science, but easily learned with a little practice. The steak is best served rare or medium rare. The steak should not be cooked any further as it will then lose tenderness, juiciness and integrity.

Transfer the steaks to a cooling rack suspended over a plate to collect any juices falling from the steaks. (If placed directly on the flat surface of a plate, the meat will continue to cook by steaming from below.)

Season with salt, tent loosely with foil, and allow the steaks to rest in a warm place near the fire for 8 to 10 minutes. (This is a general rule for any meat cooking technique. If you cut into the steak right away, it will bleed a good deal of fluid and leave the meat itself dry. Resting the steak allows the juices to remain in the meat and produce a juicier result. Harold McGee is brilliant on the subject. See page 165 of the revised and updated On Food and Cooking.)

Slice and drizzle with an exceptional extra virgin olive oil from Italy.