Accessibility links
Bebo Valdes' Long Musical Journey At 87, Cuban pianist and composer Bebo Valdes is busier than ever — and he's getting more recognition than ever before. But just 10 years ago, he was hardly recognized as a lounge pianist in Stockholm. 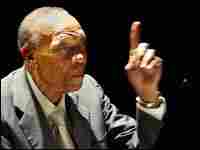 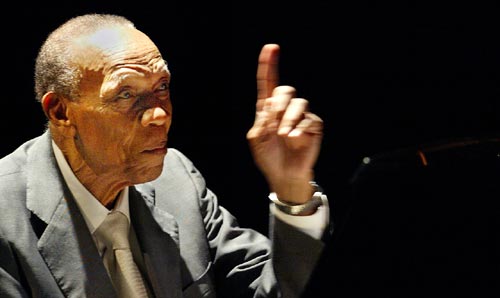 Bebo Valdes performs at the Cantabria Cultural Festival in Santander, Spain, in 2004.

At the age of 87, Cuban pianist and composer Bebo Valdes is busier than ever. And he's getting more recognition than ever before. In the past two years, he's won two Latin Grammys and a regular Grammy and his latest CD has just been nominated for another Grammy.

Just 10 years ago, Valdes, one of the most storied musicians of Cuba, was serenading travelers at hotels and bars in Stockholm as a lounge pianist.

Valdes says he never expected to be doing this much at his age. He was content just playing piano in Sweden.

"If you are a musician, and you do one thing, you should enjoy what you do," he says. "This is my profession and it is my hobby. And I live in love with what I do. In those years in Stockholm, even if I wasn't successful, I did it because I liked it. And I would keep doing it until I die."

The long road from Havana to Stockholm to Grammy winner started in Cuba in 1925, when he was 7 years old. Valdes says he was mesmerized by a pianist accompanying a dance orchestra.

Valdes went on to study European and Cuban classical music at the Municipal Conservatory in Havana. After class he took in the music of the Cuban streets, the African-influenced rumba. Then in the early 1930s, he heard American jazz. His influences included Jelly Roll Morton, Tommy Dorsey and Dizzy Gillespie.

"They each had their distinct sound and styles," Valdes says. "And they had great arrangements that I would listen to so carefully."

In 1948, Valdes harnessed the influences of American jazz, Cuban melodies and African rhythms when he became the principal pianist and arranger for the house orchestra of Havana's Tropicana night club, the crown jewel of Cuban nightlife. The top singers and orchestras in Cuba soon went to Valdes for their arrangements.

Then things started to change for both Valdes and Cuba. A revolutionary government took over the country in 1959 and many of the island's casino's and nightclubs were shut down. Valdes started his own orchestra, and in October 1960 he asked for permission to travel to Mexico with the band.

It was a calculated political choice: Valdes didn't plan on returning. It was also a difficult personal decision: he left behind a wife and five children.

From Mexico, Valdes didn't look back. He went to Europe, where in 1963 he married and started a new family in Stockholm. A 1994 CD, Bebo Rides Again, jump-started the pianist's career.