Songs from Southern Culture on the Skids played on 'World Cafe': 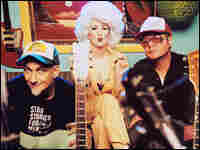 The new album from Southern Culture on the Skids continues their string of party albums — by adding a California twist.

Mojo Box reflects guitarist Rick Miller's mixed musical heritage, as his childhood was divided between North Carolina and California. The result is a mix of garage, country, blues, rockabilly and more, with a California surf guitar twist.

Southern Culture on the Skids got its start in 1985, when guitarist/singer Rick Miller was in art school in Chapel Hill, N.C. He founded a trio of performers who poked affectionate fun at the South — which often left listeners either amused or angry.

With drummer Dave Hartman and bassist Mary Huff, Miller's band became known for its raucous live shows, which often climaxed with the musicians tossing fried chicken to — or at — their audience.

The carnival atmosphere of a Southern Culture on the Skids show owes something to wild-man singer Hasil Adkins, whose releases include 1985's Chicken Walk and the retrospective Poultry in Motion. A song on Mojo Box, "Cicada Rock," is an homage to Adkins, who died in April 2005.