Accessibility links
Maryland Judge Rejects Ban on Same-Sex Unions A Maryland judge has ruled that a state law that bans same-sex marriage is unconstitutional. But the judge said she won't allow couples to get married while the attorney general appeals. While the ruling is a victory for efforts to allow same-sex unions, it is certain to be challenged.

A Maryland judge has ruled that a state law that bans same-sex marriage is unconstitutional. But the judge said she won't allow couples to get married while the attorney general appeals. While the ruling is a victory for efforts to allow same-sex unions, it is certain to be challenged.

A Maryland judge has ruled that a state law that bans same-sex marriage is unconstitutional. But Judge M. Brooke Murdoch says she won't let couples get married while the attorney general appeals her decision. NPR's Barbara Bradley Hagerty has the story.

BARBARA BRADLEY HAGERTY: The ruling, if it survives on appeal, will change everything for couples like Gita Dean and her partner, Lisa Polyak. They've been together for 25 years. They have two daughters through artificial insemination, and have been through years of frustration over things like health insurance or medical emergencies. So imagine their reaction when Judge Murdoch ruled today that same-sex couples deserve the protections of marriage.

GITA DEAN: I don't know if it's elation, it feels more like a relief.

BRADLEY HAGERTY: Ken Cho, their attorney at the ACLU, says this is a major victory. Now Maryland joins four other states as places where judges have ruled in favor of same-sex marriage. Only Massachusetts allows them to wed. Cho says Murdoch agreed that tradition does not justify discrimination.

ACLU: The court then went on to hold the law doesn't have even a rational basis, and therefore would fail even if it were not sex discrimination.

BRADLEY HAGERTY: The judge wrote, "Although tradition and societal values are important, when tradition is the guise under which prejudice or animosity hides, it is no a legitimate state interest." Matt Staver of Liberty Council, a law firm that opposes gay marriage, says the judge overreached.

MATT STAVER: The judged ruled there is no conceivable or rational relationship between male-female marriage and procreation, and the best interest of children. That particular aspect of the ruling is so extreme, it makes it easier to reverse this case on appeal.

BRADLEY HAGERTY: Which the Maryland Attorney General has said he will do.

Gay Marriage: Taking the Battle to the States 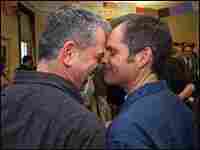 Supporters of legalizing same-sex marriage have largely eschewed a federal battle, choosing instead to focus their efforts on a case-by-case basis in state courts around the country. Challenges are largely based on the argument that barring same-sex unions violates equal protection and due process guarantees in state constitutions. Below, a look at how these challenges are playing out in several states:

California: In February 2004, San Francisco Mayor Gavin Newsom ordered county workers to change marriage license-application documents to allow for same-sex marriages. Nearly 4,000 same-sex couples wed in San Francisco before the California Superior Court ordered a halt to the nuptials on March 11, 2004. The next day, 12 same-sex couples filed suit; a year later, San Francisco Superior Court Judge Richard Kramer ruled in their favor. In April 2005, Kramer found that excluding same-sex couples from marriage discriminates on the basis of sex and violates the fundamental right to marry -- a right recognized by the state. The case, Woo and Chung v. Lockyer, is now before the California Court of Appeal in San Francisco. Both sides have filed briefs. The appellate court is expected to hear oral arguments sometime early in 2006.

The suit was filed before Connecticut passed a law creating civil unions in April 2005. In July 2005, GLAD filed legal briefs in the case arguing that the creation of a separate system of civil unions for gay and lesbian couples is discriminatory. The New Haven Superior Court will hear oral arguments in the case on March 21.

Maryland: On Jan. 20, 2006, Baltimore Circuit Court Judge M. Brooke Murdock ruled that a 1973 statute that defines marriage as between a man and a woman violates the state constitution. Murdock stayed the opinion until a higher court has affirmed the decision, which means same-sex couples still can't get marriage licenses in the state. The state attorney general is appealing to an intermediate court. The suit, Deane v. Conaway, was filed in July 2004 by nine Maryland lesbian and gay couples and a bereaved man.

Massachusetts: Massachusetts' high court made history in November 2003 when it ruled that gay couples are legally entitled to marry under the state constitution. In light of the ruling, Massachusetts began issuing marriage licenses to same-sex couples in May 2004 -- but only for state residents. Gov. Mitt Romney has invoked a 1913 law to bar non-resident gays and lesbians from tying the knot. (The law prohibits marriages between out-of-state couples who can't legally wed in their home states.)

In June 2004, eight same-sex couples from out of state sued for the right to marry in Massachusetts. The plaintiffs say the 1913 law was ignored for decades; the governor's decision to enforce it now, they argue, is a form of discrimination that violates the state constitution. Massachusetts' Supreme Judicial Court -- the same one that made gay marriage legal in the state -- heard oral arguments in the case in October 2005. On March 30, 2006, it ruled that same-sex couples from other states do not have a right to wed in Massachusetts unless they plan to live there afterwards.

New Jersey: The gay and lesbian plaintiffs in Lewis v. Harris filed suit in June 2002 after being denied marriage licenses. The seven same-sex couples argued that the denials violated New Jersey's Constitution. The state's marriage law does not expressly ban gay marriage, nor does it define marriage as a union between a man and a woman. However, in November 2003, the lower court judge hearing the case found that legislative history suggested the law is only intended for marriage between a man and a woman. The plaintiffs appealed, and in June 2005, the New Jersey Appellate Division ruled 2-1 against them. Because there was a dissenting opinion at the appellate level, New Jersey's Supreme Court must accept the appeal. The state's high court will hear oral arguments in the case beginning Feb. 15.

New York: At least two cases making their way through New York's appellate court system seek marriage rights for same-sex couples. In Samuels & Gallagher et al. v. New York, filed in April 2004, 13 same-sex couples sued the New York Department of Health. The suit argues that state health regulations defining marriage as between a man and a woman violate equal protection provisions in New York's Constitution. The plaintiffs -- who include New York State Assemblyman Daniel O'Donnell and his partner of 23 years -- lost at the trial level. The case has been argued before an appellate court, which has not yet issued its decision. (Daniel O'Donnell is the brother of entertainer Rosie O'Donnell.)

Plaintiffs were more successful at the trial level in a second case, Hernandez v. Robles. In February 2005, state Supreme Court Justice Doris Ling-Cohan found that New York's domestic relations law was unconstitutional because it denies same-sex couples the right to marry. The decision was overturned on appeal in December. The appellate court said Ling-Cohan had "exceeded the court's constitutional mandate" by ruling that the law should redefine the words "husband" and "wife" to apply equally to men and women. New York's Court of Appeal -- the state's highest court -- will hear oral arguments on the constitutionality of barring same-sex marriage on May 31, 2006.

Washington State: In August 2004, King County, Wash., Superior Court Judge William Downing ruled that the state constitution guarantees basic rights to lesbians and gay people -- and that those rights are violated by a state law prohibiting gay marriage. The case involved eight same-sex couples who were denied marriage licenses in King County. A month later, a court in Thurston County issued a similar ruling. The two cases were consolidated into one -- Andersen, et. al. v. Sims, et. al -- and appealed to the Washington State Supreme Court, which heard arguments in March 2005. A ruling from the state's high court is expected any day.

At least four states have already ruled in cases challenging the constitutionality of barring same-sex marriage. Only one court -- the Massachusetts Supreme Judicial Court -- ruled in favor of the plaintiffs.

Arizona: In July 2003, Harold Donald Standhardt and Tod Alan Keltner asked the Arizona Court of Appeals to overturn the state's ban on same-sex marriages. The couple based their lawsuit on a landmark U.S. Supreme Court decision handed down the previous month that struck down a Texas anti-sodomy law. The Arizona Court of Appeals dismissed the suit, and on May 25, 2004, the state's Supreme Court decided it would not hear the case (Standhardt v. Arizona).

Indiana: On Jan. 20, 2005, the Indiana Court of Appeals rejected a challenge by three same-sex couples to a state law banning gay marriage. The law prohibits the recognition of same-sex marriages -- even those that occurred in states where the marriages were legal. "The Indiana Constitution does not require the governmental recognition of same-sex marriage, although the Legislature is certainly free to grant such recognition or create a parallel institution under that document," the court said in its ruling.

Oregon: In April 2005, the Oregon Supreme Court voided more than 3,000 marriage licenses issued to same-sex couples between March 3 and April 20, 2004. The licenses were issued in Multnomah County after the county attorney determined that Oregon's 1862 marriage law violated the state Constitution. A suit filed in April 2004 challenged the law, arguing that prohibiting gay marriage violated the equal protection guarantees in the state constitution.

But in November of that year, Oregon voters overwhelmingly approved an amendment to the state constitution that banned gay marriage. Oregon's high court heard oral arguments in the case two weeks after the ban took affect. When it ruled the following April, the state Supreme Court dismissed the case on the grounds that, in light of the voter-approved amendment, the argument was moot.