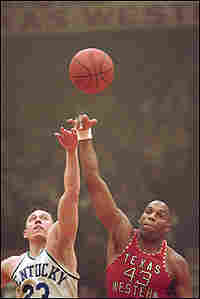 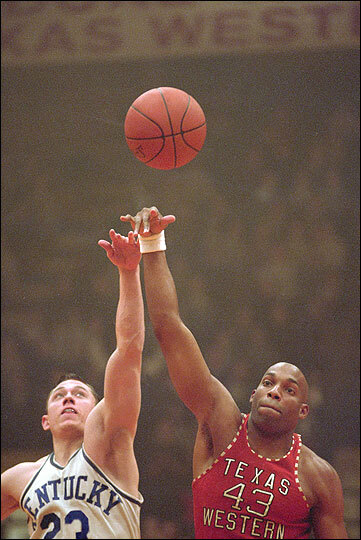 The number one movie in the nation last weekend was Glory Road. It's a feel-good basketball flick based on the 1966, Texas Western Basketball team, the first team in history to field an all-black starting line-up in the NCAA title game. The players faced an all-white team from the University of Kentucky.

Texas Western's coach Don Haskins was white and he is a pivotal character in Glory Road. He's played by Josh Lucas. Here he is pumping up his team in the locker room...

YDSTIE: Glory Road has oodles of glory but how faithful is the movie to the facts?

Our sports commentator Ron Rapoport is a columnist for The Chicago Sun Times and joins us from Chicago, hi Ron.

YDSTIE: So tell us how faithful is Glory Road to the facts?

Mr. RAPOPORT: You know, John, this movie is so well made, and so well intentioned that you hate to rain on its parade. But the integration of sports is so important and tells us so much about the fight for social justice in America that, I really think we have a right to insist that the facts not be trampled on quite to the extent that Glory Road does.

The dominance of black players in basketball did not happen overnight, with Don Haskins showing up in 1965 from a high school girl's team and winning a national title that year. Haskins got there four years earlier, built his team over time, recruited the players over time.

To me, this movie trivializes the long road that it took to integrate the game and makes it, turns it into a sort of a fairy tale. And, as far back as 1955 Bill Russell and Casey Jones led a team with four black players to the NCAA title. In 1962, Cincinnati won with four black starters. In 1963, Loyola of Chicago did the same thing.

YDSTIE: One interesting thing is that the white press at the time was absolutely quiet on the race issue. No one commented that there five black starting players on the Western Texas team.

Mr. RAPOPORT: No, the social impact of the five black starters winning the national championship is something that's been talked about, mostly in retrospect. It just did not seem to be a big deal at that time. John, by 1966, when the movie takes place, the top four players in the NBA were Bill Russell, Wilt Chamberlain, Oscar Robertson and Elgin Baylor. So, early in the movie, when somebody tells Haskins, You talk like Negroes are the future of basketball, what's meant to be ironic comes off as just silly.

YDSTIE: Why, at this moment when the rest of the news was all about race in many ways -- the '64 Civil Rights Act had just occurred, we were in the era of freedom riders and marches, why would the press not even bother to comment on this?

Mr. RAPOPORT: John Eddy Einhorn, the owner of the Chicago White Sox, has just compiled an oral history of college basketball that I helped him with, How March Became Madness. He had a long talk with John Thompson, great former Georgetown coach, lived in Maryland at the time. And he talks about remembering that game and he said it just wasn't a big deal in the black community. Sure we thought it was good, but nobody was running around saying this was terrific. He later said that, he had long talks with Haskins, who said he wasn't trying to prove anything by starting the five black players.

The movie argues differently. The movie says, quotes Haskins as saying, We're gonna do it to prove a point. They say you're not good enough. and he tells his team that the white players are not going to play. Haskins never said anything about that. What Thompson told Einhorn in the book is, he didn't say I'm gonna kick down this wall, he said, I'm gonna win this Championship, he wasn't thinking about anything else. And those are the kinds of liberties that the movie takes all along.

YDSTIE: You know filmmakers often argue that they're not bound to be journalists when they make movies. But, from a sporting perspective, which movies do you think have captured the spirit and the facts of a major sporting event?

Mr. RAPOPORT: Well, the best movie ever made about basketball, I don't think there's any dispute about this, and one of the top 10 documentaries of all time is Hoop Dreams, which showed the struggles of two black high school players to succeed and to hopefully get into college.

Mr. RAPOPORT: Nobody expects movies that are based on a true story, as Hollywood likes to say, could be that scrupulous. But you like to see them stay a little closer to the facts.

YDSTIE: One of the most famous basketball movies, of course, is Hoosiers, one of my favorites as well. How accurate is that movie?

Mr. RAPOPORT: I love Hoosiers, too. The answer to your question is, not very. It took the point of view of a little, tiny high school beating a great, big high school. And you can't disagree with those facts; the story itself was absolutely true. And I really feel that Glory Road tampers with so much of what actually happened in 1965 and 1966, and with its social import that it needs to be held up to a higher standard.

YDSTIE: One of my favorite scenes in Hoosiers is the coach taking the team from the small town into the huge, cavernous gym where the state championship is going to be played. And he takes out the tape measure and he measures the basket. And he says...

Mr. HACKMAN (as coach Norman Dale): I think you'll find that it's the exact, same measurements as our gym back in Hickory. Okay, let's get dressed for practice.

Mr. RAPOPORT: John, you know, if he didn't do that you know he should have, right?

Mr. RAPOPORT: Good to be with you, John.

YDSTIE: Ron Rapoport is a columnist for the Chicago Sun Times and our sports commentator here on Weekend Edition. Thanks.

YDSTIE: By the way, that was William Gates speaking in the clip from Hoop Dreams.