Accessibility links
Bettye Lavette Raises the Soul Flag : World Cafe A cult favorite among soul aficionados, Bettye LaVette is back with a scorching new CD, I've Got My Own Hell to Raise.

With over 40 years of performing, Bettye LaVette has been around the block. She cut her first record for Atlantic at the tender age of 16. She starred in a Broadway show with Cab Calloway and has toured with the likes of Ben E. King, Otis Redding, and James Brown. 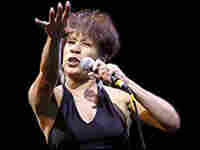 With the recent release of I've Got My Own Hell to Raise, LaVette is once again exploding onto the scene.

A cover album unlike any you have heard, on I've Got My Own Hell to Raise, LaVette takes her turn at songs popularized by a range of singers, from Lucinda Williams to Fiona Apple and Sinead O'Connor. LaVette transforms each track by evoking the intense soul style that first won her fans, with songs like "Let Me Down Easy" and "Your Turn to Cry."

This interview originally aired on January 25, 2006.