Accessibility links
Palestinians Go to Polls in Parliamentary Election Palestinians voted Wednesday in their first parliamentary elections in a decade. The election pits the ruling Fatah Party of President Mahmoud Abbas against the militant Islamic movement Hamas, which is participating in elections for the first time.

Palestinians voted Wednesday in their first parliamentary elections in a decade. The election pits the ruling Fatah Party of President Mahmoud Abbas against the militant Islamic movement Hamas, which is participating in elections for the first time. 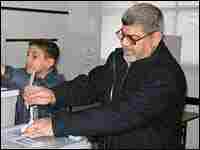 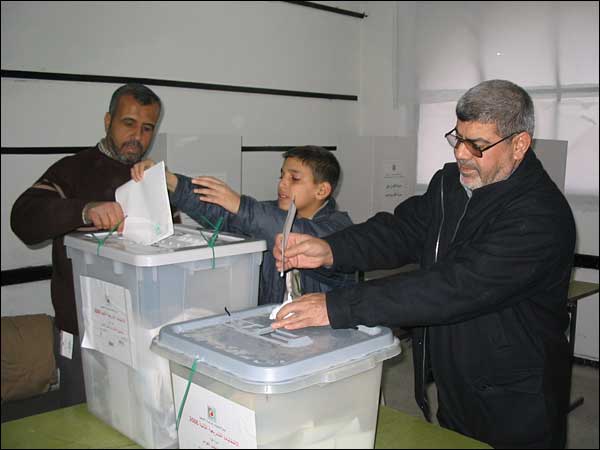 Palestinians are voting today in their first Parliamentary elections in a decade. The election pits the ruling Fatah Party of President Mahmoud Abbas against the militant Islamic movement, Hamas. It is the first time that Hamas has participated in an election and it's expected to pick up enough seats to be a major force in the new Palestinian Parliament.

We turn now to our correspondents in Gaza and the West Bank. First NPR's Linda Gradstein, who is in the West Bank city of Ramallah, and, Linda, tell us about the voting so far.

The voting is going smoothly so far. The mood is calm but sort of excited, expectant. There are lines outside the polling booths. It's a national holiday, so people, you know, kind of slept late and got up. The streets are full of people and there's, you know, campaign posters everywhere. There's not supposed to be any campaigning going on today but I did hear the, you know, election jingles of both Fatah and Hamas. Both sides are making a real effort to get people out, get them to the polls. Palestinian pollsters expect a turnout of about 75%, which is pretty high.

The head of the central elections commission said that so far it's been going very smoothly, that in the West Bank people have been able to get to the polls. They have not been stopped at Israeli road blocks. After people vote, their forefinger on their left hand is inked to stop people from voting more than once. And so far things really seem to be going very smoothly.

MONTAGNE: This has the potential of being quite an important election.

GRADSTEIN: It is an important election. And many of the Palestinians that I've spoken to so far say that they feel that sense of importance. They see it as an important step towards the Palestinian state. The fact that Hamas is participating for the first time is seen as significant.

There's quite a rivalry going on between Hamas and Fatah. Here in Ramallah which was always sort of a stronghold of Fatah, it's where Mahmoud Abbas has his office, and was, you know, always seen as kind of one of the main, you know, places that Fatah was very strong. They're very worried here, Fatah, that even in Ramallah, Hamas might win. And I spoke to one of the senior Hamas candidates who said that they're hoping for at least 40% if not even more than that.

MONTAGNE: And let's get NPR's Eric Westervelt into the conversation. Eric, you're in the Gaza Strip and that's where support for Hamas is strongest.

That's correct. Campaigning is still sort of going on here, Renee, despite the fact that it's not allowed. Hamas supporters are waving flags, chanting, and playing music. Fatah is doing the same, as well.

Hamas is known to the world as a terrorist organization that has attacked Israel scores of times killing many Israeli's. They don't recognize the state of Israel, but on the campaign trail throughout the Gaza Strip this last week, they've really emphasized their network of charitable organizations. The healthcare, the childcare, education, religious-based education and other services and they've been padding themselves as the clean alternative to what they call a corrupt, out of touch Fatah.

MONTAGNE: And that's why Fatah is in trouble, is it not partly because its reputation for corruption?

WESTERVELT: That's right. Hamas is saying, we are the ones who will clean up corruption. We're religious based. We will not misuse the people's money. Look at what we've done with our charitable organizations. We've spent that money well. What the candidates on the campaign trail here, Renee, often say is, they tout an anecdote, look 40% of the budget is spent on security but look, throughout Gaza, there's been no security, no enforcement of the law. Armed factions have been vying for power throughout different districts of Gaza. And Hamas has said, we'll clean that up.

Fatah acknowledges that some of the mistakes they've made. They said they were late in coming to this campaign. Hamas has been really out on the campaign trail a lot earlier and longer. I spoke with one Fatah candidate, Samir Masharawi. He's a younger generation Fatah member who said, look we have to acknowledge to the people we've made mistakes, we're imperfect. But he said we are the moderate centrist alternative to extremist Hamas and we're the ones that we hope the Palestinian people remember when they go to the polls today.

MONTAGNE: Well what are the voters telling you in going there to the polls?

WESTERVELT: I've encountered several voters who've said look we're not big supporters of Hamas but we're going that way because we just want a change. We want an alternative. Fatah has had a decade running the Palestinian authority. They founded the revolution to try to establish a Palestinian state but they're saying look it's time for a change. They've become out of touch, entrenched and we want to give Hamas a try.

They've also, I've encountered several people here who bring their children to the polling stations. They want to show their kids that, look, this is an historic election. This is your right. We want to show you democracy in action. So there's been a real festive atmosphere around some of these polling sites with the, sort of, families coming to vote and going through the process.

MONTAGNE: Well, Eric, Gaza has been highly chaotic since Israel pulled out, what's the security situation there on this day of voting?

WESTERVELT: I've spoken to the Palestinian police, election observers, and some Palestinian election officials, and they all say, so far so good in the Gaza Strip. Security is pretty tight. Palestinian police with their AK-47s are outside. Most polling sites trying to enforce a sense of calm and order and checking people's IDs. But so far, there has not been the kind of lawlessness that has plagued Gaza since Israel's unilateral pullout this summer from the Gaza Strip.

MONTAGNE: Linda, back to you there on the West Bank, what's the security situation there?

GRADSTEIN: Similar to what Eric said, there are more than, in the West Bank and Gaza combined, I think something like 13,000 police officers out in force at the polling places. Yesterday, in Nablus, a little bit north of Ramallah, a Palestinian election worker from one of the break-offs from the Fatah movement was killed by another rival break-off, and there's been, within Fatah, as opposed to Hamas, where there's sort of, you know, one voice speaking, and one policy coming forth, in Fatah, there's a lot of candidates also running as independents, lots of break-offs.

There's been a lot of tensions within Fatah, and there was concern that this election worker that was killed yesterday in Nablus, that that could spark violence in Nablus. That so far hasn't happened. Things do seem to be, you know, calm and under control. There was also an agreement by all militant groups that no guns would be brought anywhere near polling places today.

MONTAGNE: This growing popularity and political strength, potentially, of Hamas has really gotten Israel worried about this election.

GRADSTEIN: Yes, Israel is extremely worried about this election. In fact, acting prime minister, Ehud Olmert, earlier this week held a discussion among senior Israeli officials about what are they going to do if Hamas wins? And how do you handle, you know, whether or not Hamas wins, or if Hamas even takes up a Parliamentary post? Yesterday, former U.S. President, Jimmy Carter, who is at the head of a very large observer delegation said that the United States will not deal with a Palestinian government that has Hamas in the government, unless Hamas renounces violence and agrees to demilitarize.

I think Israelis are very nervous about what this means. There are some who say, look, you know, Hamas is a fact of life, you know, we can't choose who we're going to negotiate with, and that having Hamas inside, they say, is better than having Hamas outside, where it could play a spoiler role.

MONTAGNE: Well, just to note, though, Hamas is still designated as a terrorist organization by, not just Israel, but the U.S. and Europe.

GRADSTEIN: That's right, and both the European union and the United States have said that they will cut off aid to the Palestinian authority if Hamas does not renounce violence. And, you know, there are some who are saying, on, you know, both Israeli and Palestinian analysts, who I've spoken to, have said, look, once Hamas joins the government, they will have to renounce violence.

MONTAGNE: Linda, thanks very much.

MONTAGNE: We've been talking about today's Palestinian elections with NPR's Linda Gradstein in the West Bank city of Ramallah, and NPR's Eric Westervelt in the Gaza Strip.