Accessibility links
A Mammoth Death Match Preserved for the Ages In 1962, workers in Nebraska stumbled opon the intact remains of two giant Ice-Age mammoths, their tusks locked together -- a vestige of the battle that doomed them both. Four decades later, the unique fossil will finally go on public display.

Listen
A Mammoth Death Match Preserved for the Ages 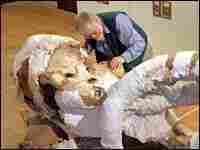 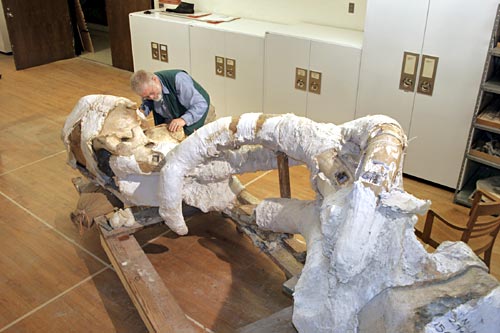 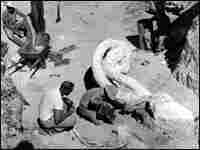 Workers remove sediment from around the locked mammoth skulls disovered near Crawford, Neb., in the summer of 1962. Photo Courtesy University of Nebraska State Museum hide caption 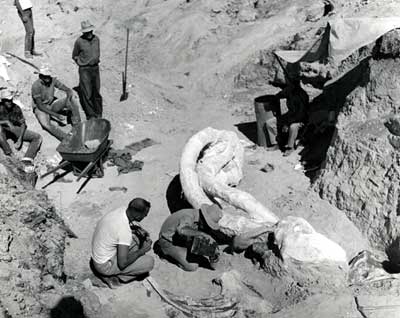 Workers remove sediment from around the locked mammoth skulls disovered near Crawford, Neb., in the summer of 1962.

In the 1960s, workers in western Nebraska stumbled on the intact remains of two giant Ice-Age mammoths, their tusks locked together -- a vestige of the battle that doomed them both. After sitting in storage for decades, the unique fossils will finally go on public display soon.

When Mammoths Roamed the Earth

The fossils were discovered in 1962 in the Nebraska Panhandle, when a pair of workmen stumbled on a large thighbone while installing an electric line on a ranch. That summer, 20-year-old paleontology student Mike Voorhies was in the area working on a fossil dig. After working at the discovery site for a couple of days, Voorhies and his crew realized the men had found the intact remains of not one but two Ice-Age mammoths.

"Once we got to the skull, it turned out, 'well, there's one tusk, there's two tusks -- uh oh, three tusks. What's going on here?'" Voorhies recalls. "Even a young student realizes an elephant only has two tusks. So it gradually dawned on us that we actually had two animals, locked in a death struggle -– and probably the most exciting single fossil that I've ever seen. "

Now in his 60s, Voorhies is the curator of paleontology at the University of Nebraska in Lincoln. And the mammoths, after decades of being in storage, viewed almost exclusively by researchers, are being prepared to travel 400 miles west. Voorhies says there's no other known fossil quite like it anywhere in the world. The two mammoths' tusks are locked together, intertwined like a pair of twisted tree trunks. "It's actually the old story," Voorhies says. "They were fighting over sex."

Scientists believe that like modern elephants, male mammoths periodically produced extra testosterone, which drove them to fight over mates. University of Michigan professor Dan Fisher is studying the mammoths' tusks, looking for clues about why the species went extinct. Fisher says the Nebraska find gives scientists a rare glimpse of animal behavior preserved in the fossil record.

"To find multiple individuals caught in the act of some interaction that was critical to their lifestyle -- [it] gives you just an extra dimension that isn't usually there," Fisher says.

Voorhies, the paleontologist, says it appears the two competitors were so well matched that neither one backed down. Standing over the 12-foot-long wooden pallet that supports the giant fossil, Voorhies points to the tip of one mammoth's tusk, which pokes into the eye socket of its opponent:

"These guys were not fooling around," he says. "And there's the old adage in boxing that the bigger they are, the harder they fall. You can just imagine two, eight-ton animals sort of falling over and then not being able to get up."

Today, the tusks and skulls lie on the wood floor of the large, fourth-floor room where they're being prepared for public exhibition. Using a knife and brush, a museum worker is scraping off layers of old, yellowed shellac, revealing the off-white surface beneath.

The exhibit is scheduled to open at a museum near Crawford, Neb., in April.