Accessibility links
Study Backs Ethanol as Gasoline Substitute About one out of every 40 cars and trucks in the United States can now run on a commercial mix of gasoline and ethanol, mostly made from corn. And the federal government is backing the renewable fuel industry. But does ethanol really reduce dependence on fossil fuels? 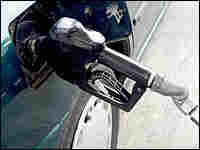 The federal government is supporting the growing ethanol biofuel industry through subsidies to corn farmers and tax breaks at the pump. IStockPhoto hide caption

About one out of every 40 cars and trucks in the United States can now run on a commercial mix of gasoline and ethanol, which is mostly made from corn.

Biofuels on the Market

A selling point of using plant material — such as corn, wheat and soybeans — to fuel the nation's cars and trucks is that it's a renewable resource. You can always grow more.

Perhaps the bigger appeal for the U.S. government is the ability of such biofuels to reduce reliance on foreign oil. But there's still debate over whether biofuels can actually do this — and in an environmentally sound way.

Innovation and technology will be key to making biofuels more useful. Meanwhile, some are already on the market, possibly at a pump near you:

E10: Ethanol is an alcohol fuel made from distilling sugars in crops, primarily corn in the U.S. In some states, a gasoline blend with 10 percent ethanol — E10 — is widely used to reduce carbon monoxide emissions. Minnesota now requires that all gasoline contain at least 20 percent ethanol.

E85: More than two dozen car and truck models — like the Ford Taurus and Explorer — already on the road can use either gasoline or E85 — a blend that contains 15 percent gasoline and 85 percent ethanol. Most gas stations that sell E85 are in the Midwest, where the corn is grown. See if your car is a "flex-fuel vehicle" — and see if there's a pump near you — at the Department of Energy's Alternative Fuels Web site.

Drawbacks: The DOE backs ethanol as an energy efficient fuel, but some researchers, such as Cornell's David Pimentel, argue that the biofuel requires more than a gallon of oil to make just one gallon of ethanol. And even if all of the nation's corn supply were recruited for ethanol, the fuel would meet less than 10 percent of transportation needs. The environmental consequences of ramping up pesticides to produce large-scale biofuel crops also must be considered.

Innovations: Cellulosic ethanol — a still-experimental process in which ethanol can be made from almost any type of plant — expands the source material for biofuels. And by using trees, grass or crop wastes, energy input into the process may be reduced. Also, some refineries are experimenting with the use of manure to fuel production instead of fossil fuels.

Biodiesel is a cleaner burning fuel than diesel, with lower emissions, notably the greenhouse gas carbon dioxide. Most commercial biodiesel is made from soybean oil, and some is already mixed in with diesel to reduce emissions.

Commercial Availability: Unlike E85, which requires a special engine, biodiesel can be used in any engine that takes diesel. But like E85, the problem is finding a pump that sells biodiesel. Find your local pump.

DIY: Biodiesel can be made at home from discarded vegetable oils, often collected from restaurant waste oils.

Drawbacks: As with ethanol, source material is also problem. Despite America's love of french fries, there isn't enough waste oil from restaurant fryers to fuel our transportation system.

Ethanol enthusiasts, such as corn growers and the politicians who represent them, would like that number to rise. The federal government is helping with subsidies for ethanol.

But there's an unresolved problem with ethanol: Does it really reduce dependence on other forms of energy, such as oil or coal?

The CITGO gas station on West Street in Annapolis, Md., is one of four stations in Maryland that sells E85 fuel -- 85 percent ethanol and 15 percent gas. Manager Wang Kan says the regular gas pumps sells 1,500 gallons a day, while the lone ethanol pump sells about 20 gallons a day.

But Kan says when gas prices were high last year, 10 times as many people bought ethanol.

The question is, did that switch reduce America's consumption of oil and other polluting fossil fuels?

It all depends on how you add up the amount of energy needed to make ethanol.

"Do you include the lunch that the farm workers eat as an energy input?" asks Dan Kammen, a physicist and energy expert at the University of California at Berkeley. "Do you include the energy to build the factory, the tractors? You can spend a lot of time on stuff that is sort of secondary, but it boils down to a critical thing: Do we do better from a national security perspective and greenhouse gases and global warming perspective by burning gasoline or by growing a biofuel and putting that in our tank?"

Kammen and his colleagues at Berkeley think the nation does benefit from using biofuels. His team reviewed the main studies on ethanol and energy, updated the figures and tried to standardize the energy inputs -- things like the energy needed to make fertilizer or electricity and everything else needed to refine gasoline or ferment ethanol.

"We found unequivocally that it does not take more energy than you get out of the amount of ethanol. So it's a net good if you grow ethanol and use it," says Kammen.

David Pimentel, an agriculture scientist at Cornell University, disagrees. He is skeptical of the Berkeley team's research, which directly challenges his own conclusion that making ethanol takes much more energy than it produces.

"They criticize us for including the energy for the labor -- that is the farm laborer who is working on the farm," he says. "They deleted that. They also deleted another major input, that is the farm machinery."

Pimentel says when all of the important sources of energy needed to grow the corn and make the ethanol -- he lists 14 -- are included, it takes 70 percent more energy to make gallon of ethanol than it gives off. Since much of that energy comes from oil or coal, he says it's not a good alternative. Pimentel adds that ethanol does make considerable money for companies that grow corn.

Kammen disagrees with Pimentel's numbers, but acknowledges that the positive energy benefit he sees in corn-based ethanol is modest.

"It is not a massive savings, not like putting in 10 percent energy and getting out 100 percent. We find it is somewhat better than gasoline, but it's not a home run," Kammen says.

And in fact making and using ethanol does almost nothing to lessen the amount of greenhouse gases that warm the atmosphere.

The Berkeley and Cornell groups do agree on one thing -- corn isn't the best way to make ethanol. Plants with higher cellulose content like switchgrass or sugar cane are much better. Kammen says high cellulose plants are the future of ethanol, not corn.

The Berkeley group is publishing its calculations in the journal Science, and will post them on the Web for anyone who wants to check their math.