Accessibility links
Holes in Monitoring System Let Lemons Get Resold An estimated half-million cars were flooded in hurricane zones this year. Unsuspecting buyers around the country are likely to end up with lemons, because there's no effective system for keeping track of those cars. And there's evidence that insurers have blocked efforts to create one. 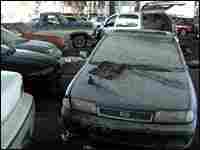 Flooded cars stored underneath the I-10 freeway near downtown New Orleans. Estimates suggest 500,000 such cars were flooded after hurricanes Katrina and Rita. Consumer advocates warn some will start showing up on the used-car market. Jeff Brady, NPR hide caption

Thousands of vehicles that sat in the murky waters left by hurricanes Katrina and Rita are starting to show up on the used-car market.

Scroll down to read why some people might want to end up with a hurricane lemon.

Most states require that flooded cars be labeled as such on the title. But scam artists have found loopholes in the system. They re-register cars in states with looser title laws -- sometimes two or three states -- until the warning that the car was flooded is gone. This fraudulent practice is known as "title washing."

In 1992, Congress passed a law designed to stop the practice of title washing, but it was never fully implemented. The National Motor Vehicle Title Information System (NMVTIS) was designed to offer car history reports, as well as other information not available from commercial companies -- such as valuable data derived from insurance claims. Advocates say the program would save both consumers and the government money -- money that might otherwise be spent investigating title fraud.

But NMVTIS has been crippled. Consumer advocates say one big reason is opposition from commercial interests that profit from title washing. That opposition showed up in the form of bills introduced in Congress that would have made NMVTIS much less effective. One allowed states to opt out of the program. If just a few states pulled out of NMVTIS, that would have given scam artists a place to wash titles.

Insurers with Incentives to Hide Lemons?

Bill Brauch of the Iowa attorney general's office says those legislative efforts were led by the largest auto insurer in the country: State Farm. "They were very, very active back in the mid- and late-'90s in proposing federal legislation that would cap what the states could do and, in our view, weaken the laws that are out there," he says.

Those bills were not successful. Nevertheless, NMVTIS never got the money it needed to be effective. Some consumer advocates suspect State Farm was working behind the scenes to undercut the program. They don't have hard evidence, but Bernard Brown, a fraud attorney in Kansas City, believes State Farm did have a motive for keeping the practice of title washing alive: money.

"They've had a very lucrative business, selling their totaled cars," Brown says. "But a big part of why it's been lucrative is that they've sold them -- a lot of them -- with clean titles."

State Farm's Side of the Story

Don Hall heads the Virginia Automobile Dealers Association. He says all insurance companies profit from selling totaled cars with clean titles. "It is my professional opinion, after 27 years, that what State Farm did is the norm in the industry, not the exception to the rule," he says. "What happened to State Farm is they got their hands caught… in the cookie jar."

But David Snyder, a lawyer with the American Insurance Association, is offended by that claim. "That kind of thinking has just never occurred to the insurance industry and strikes me as absolutely unfounded allegations," Snyder says. "People are trying to, apparently, make a political point with regard to the insurance industry in terms of what amounts to character assassination."

NMVTIS supporters say another company that had a commercial interest in stopping the program was CARFax, which sells car history reports. NMVTIS would be a publicly funded competitor to CARFax. In 1999, when CARFax was based in Missouri, company representatives met with their senator, John Ashcroft. CARFax Spokesman Larry Gamache says Ashcroft wanted advice on whether NMVTIS was a good investment for taxpayers.

"We were asked about our thoughts on NMVTIS," Gamache says. "As a private business, we ask this of ourselves: 'Does it make sense financially? Is the ultimate benefit worth the investment of costs?'"

Later, Sen. Ashcroft publicly blasted NMVTIS as a "Washington boondoggle" and called for a cost-benefit analysis.

In 2001, the Department of Justice -- where Ashcroft had since become attorney general -- completed that analysis and found NMVTIS was a bargain. For a $22-million federal investment, NMVTIS would save car buyers as much as $11 billion a year.

But it took two years to complete that analysis. And that long wait caused problems, according to Linda Lewis-Pickett. She's with the American Association of Motor Vehicle Administrators, which is in charge of developing NMVTIS.

"We had very strong momentum going at the time the Department of Justice commissioned the cost-benefit analysis," she says. "It certainly slowed down the process, there's no doubt about that."

Lewis-Pickett says 27 states are participating in NMVTIS right now. But without money to bring in the rest of the states, loopholes still exist. David Regan with the National Automobile Dealers Association says scam artists continue to wash titles. He says every day that information goes uncollected "is a day in which fraudulent resellers and fraudulent re-conditioners and re-builders of vehicles can perpetuate fraud."

As many as 500,000 vehicles were flooded after hurricanes Katrina and Rita ripped through the Gulf States. Consumer groups are warning people that some of those cars will be cleaned up and sold to unsuspecting buyers.

You do not want a car that's been soaking in water. When the electrical system gets flooded, wiring slowly corrodes. A car may run fine at first, but pretty soon the "check engine" light is going to come on, and thousands of dollars in repairs later, there's still no assurance the car will ever run properly.

Sonny Reeves does want a flooded car. In fact, he'd like quite a few of them. He's an automotive-service technology instructor at Hutchings High School in Macon, Ga.

His students -- and aspiring mechanics all over the country -- need more late-model cars for practice. "Automotive programs are very expensive for school systems to operate and there are no funds for buying these vehicles," says Reeves.

"We get a few cars from some of the insurance companies. We have one car from GEICO. We have a couple of older cars from Ford and GM, [but] they have been taken apart so many times that they are of dubious training value."

Insurance and car companies are afraid to donate junk cars to high school and community college programs because of liability concerns, says Dan Perrin of the North American Council of Automotive Teachers (NACAT).

Perrin says Ford wanted to donate 10 flooded vehicles to NACAT and its members, but the company required a $1,000,000 insurance policy to protect it from liability. Perrin had to decline the donation because there's no money to pay for that kind of insurance.

Even if NACAT and the schools did have the money, they'd still have to worry about contamination of cars coming out the flooded areas in Louisiana, Mississippi and Alabama.

So, as cities like New Orleans deal with the burden of disposing of thousands of flooded cars, Sonny Reeves can only wish some were on their way to his high school.