Accessibility links
Q&A: Navigating Medicare's New Drug Benefit Patient advocates say there have been improvements since the initial rollout of Medicare's new drug benefit, but there are still reports of low-income seniors going without their prescriptions. NPR's Julie Rovner explains what went wrong and where seniors can turn for help. 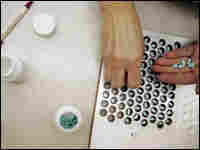 Help on the Web

Patient advocates say there have been improvements since the initial rollout of Medicare's new drug program, but there are still reports of low-income seniors going without their prescriptions. NPR health policy correspondent Julie Rovner explains what went wrong with the plan's rollout, and where seniors can turn for help:

Q: Low-income seniors seem to be having the most trouble with the plan right now. They say they're being overcharged -- some by hundreds of dollars -- and even denied coverage. What's gone wrong?

A: Several things, which compound the problems. First, the roughly 6.4 million people who get both Medicare and Medicaid were supposed to have their drug coverage automatically switched on Jan. 1 from Medicaid to new Medicare plans. They were also supposed to be notified by mail of their new plan. But about 200,000 of those "dual eligibles" fell through the cracks, and showed up at pharmacies with no information.

Barbara Edwards, former head of the Ohio Medicaid program, said state officials saw problems coming. "Any kind of a massive movement of 6 million people in one day, which happened to be a Sunday on a holiday weekend, was not a good idea," she told me.

Others were enrolled in plans, but were not properly identified as being low-income, so pharmacists charged them regular rates -- including deductibles of $250 and copayments of $40 or more, when they should have been charged no more than $3.

In still other cases, plans failed to follow transition requirements that they provide a "first fill" of a patient's existing drug, even if the plan would not normally pay for that drug. There was a problem with nursing patients, too: Some were assigned to drug plans in other states because their mail goes to a relative who lives elsewhere.

A: Medicare officials say they're starting to iron out problems with the transfer of information between computers, and they've dramatically increased the number of operators to answer pharmacist calls and has sent several stern letters to drug plans, reminding them of transition policies that require certain drugs to be covered for at least a short time.

Meanwhile, with reports mounting of low-income residents leaving pharmacy counters without their medications, more than half the states have stepped in to "turn Medicaid coverage back on," albeit with their own money. On Jan. 24, Medicare officials announced they would ensure that states are reimbursed by the drug plans, who are already being paid to provide drugs to the Medicare-Medicaid "dual eligibles."

Q: And who can seniors turn to for help?

A: People who are already in a drug plan and are having trouble getting their medicines should call 1-800-MEDICARE and ask for a caseworker. Each state also has a health insurance counseling program that can provide individual assistance for those still trying to choose a plan, although counselors have been overwhelmed by the volume of requests.

Phone numbers for those state health insurance programs, known as SHIPs, are listed on Medicare's Web site at Medicare.gov or can be obtained by calling 1-800-MEDICARE.

Q: The program was meant to provide affordable drug coverage for seniors without any coverage -- is that happening?

Yes and no. The administration notes that some 24 million Medicare beneficiaries are covered by the new Part D program. But the vast majority already had coverage: 11 million are in plans run by their former employers -- with the employers taking a government subsidy to continue previous coverage. Another 6 million are the Medicare-Medicaid "dual eligibles," while 4.5 million are in Medicare HMOs that offer drugs as part of their comprehensive coverage.

Out of the roughly 21 million Medicare beneficiaries who did not have drug coverage prior to Jan. 1, only about 3.6 million have signed up; about 17 percent of the target population. Health consultant Robert Laszewski calls such a low number "concerning," because if not enough healthy people sign up for the program, it could result in financial losses for the sponsoring drug plans.

A: That's not entirely clear. Certainly part is the large number of plans people have to choose from -- 40 or more virtually everywhere in the country. Plans have different deductibles, premiums, and copayments, as well as cover different lists of drugs. Many seniors have said the entire enterprise is simply too confusing, and the savings not assured.

Some seniors incorrectly think they are not eligible. In fact, any beneficiary with Medicare Part A or Part B can sign up for a drug plan, and those with lower incomes are eligible for additional help. Those who already had coverage must be careful, however; signing up for a Medicare drug plan can not only result in the loss of existing drug coverage, but loss of retiree hospital and doctor benefits as well. Those enrolled in employer-provided retiree plans should have received letters from those plans explaining their options.

And many may be hanging back to see if the problems get ironed out. Beneficiaries have until May 15 to sign up for a plan without penalty. Those who are eligible and fail to sign by the May deadline can enroll starting in November, but they will pay a premium penalty of 1 percent for every month they are "late" in enrolling.

Q: Health and Human Services Secretary Michael Leavitt said that once every enrollee has used a new drug card once, the kinks will be worked out and the system will run smoothly. Are there signs the situation is improving?

A: Some. Once a person's eligibility is confirmed by computer, future transactions should be less cumbersome.

But there are still problems that are likely to crop up. What happens when someone changes plans? Or when patients who got a "transition" supply of the drug they had been taking have to figure out how to navigate an appeals process?

And while Medicare officials have promised that states will be reimbursed for paying for drugs for low-income people who were overcharged or denied medications, no system has yet been set up to reimburse patients who paid too much out of their own pockets.