Accessibility links
Tricky Comedy from 'Tristram Shandy' Michael Winterbottom's latest comedy is Tristam Shandy: A Cock and Bull Story. It's based on an experimental comic novel from the 18th century. The movie is as tricky as its source material.

Michael Winterbottom's latest comedy is Tristam Shandy: A Cock and Bull Story. It's based on an experimental comic novel from the 18th century. The movie is as tricky as its source material. 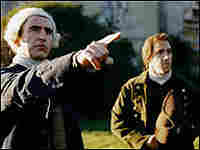 THE LIFE AND OPINIONS OF TRISTRAM SHANDY, GENTLEMAN, is a celebrated if largely unread 18th century comic novel. It's not your usual book. Its title character isn't born until it's third volume. It has blank pages and all sorts of typographical tricks, and its plot is so meandering that it even digresses from its digression. Despite all that, it's been turned into a movie. Bob Mondello says TRISTRAM SHANDY, A COCK AND BULL STORY, is nearly as tricky as its source material.

Heading straight at this free associating novel couldn't possibly work. So director Michael Winterbottom does something in the spirit of the novel. He makes a movie about making a movie of TRISTRAM SHANDY. His leading man is British comic Steve Coogan who is playing an actor named Steve Coogan who is playing Shandy as well as Shandy's father. And who frequently steps outside the film in the film to comment on the film. Got that? Well here's how it works. On screen we're seeing a movie scene in which a six-year-old Tristram Shandy is accidentally circumcised by a fallen window frame and in the background is the self absorbed 40-year-old Steve Coogan looking on.

Mr. STEVE COOGAN (in film): That is a child actor pretending to be me. I'll be able to play myself later. I think I can probably get away with being 18, 19. Until then, I'll be played by a series of child actors. This is the best of the bad bunch. He's unable to convey the pain or shock of such an event.

UNIDENTIFIED CHILD (in film): I think I can. Suzanne said I was doing it exactly how you did it.

Mr. COOGAN: It may be the same noise but it doesn't have the emotion.

CHILD: Go on then, show me how to do it.

CHILD: I thought this was a comedy not a pantomime.

MONDELLO: Everybody's a critic. Coogan is known in Britain for his role as Alan Partridge, a know-nothing host on a fake TV talk show. And he's playing a riff on that character here. He's also playing a riff on himself. So celebrity interviewers ask him about his TV show and about his real life tabloid scandal with a lap dancer. And of course about the novel, which of course he hasn't read.

INTERVIEWER: Steve Coogan, why Tristram Shandy? This is the book that people say is unfilmable?

Mr. COOGAN: I think that's the attraction. TRISTRAM SHANDY was a post-modern classic, written before there was any modernism to be post about. So it's way ahead of its time. And, in fact, for those of you who haven't heard about it, it was actually listed as number eight on the Observer's top 100 books of all time.

MONDELLO: Coogan is delicious and he's not alone. In real life, he's good buddies with actor Rob Brydon, who is playing an actor named Rob Brydon, who is playing Uncle Toby. They are, shall we say, competitive. So while Coogan worries about whether the heels for his costume will make him taller in their scenes together, Brydon is pondering the brightness of his teeth.

Mr. ROB BRYDON: Have a look at the color.

Mr. COOGAN: I saw the color last time I looked. It registered.

Mr. BRYDON: It's what they call not white. What color would you call it?

Mr. COOGAN: I would, I'd concur with not white. I'd go further.

Mr. BRYDON: I mean it's not yellow.

Mr. COOGAN: Yeah and lastly, it's not making your teeth look any better.

lots of fun. Though it's the sort of thing that prompts chuckles rather than guffaws. As far as I'm concerned, the whole movie would be worth sitting through just for the end credits where Coogan and Brydon trade Al Pacino imitations completely pointlessly because in TRISTRAM SHANDY, being pointless is the point.