Accessibility links
Abbas Asks Hamas to Form Palestinian Government After the stunning Hamas election win, Palestinian Authority President Mahmoud Abbas asks Hamas to form a new government. Abbas and his Fatah movement indicate they are not interested in a coalition.

After the stunning Hamas election win, Palestinian Authority President Mahmoud Abbas asks Hamas to form a new government. Abbas and his Fatah movement indicate they are not interested in a coalition. 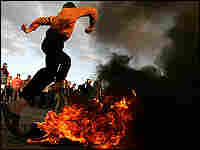 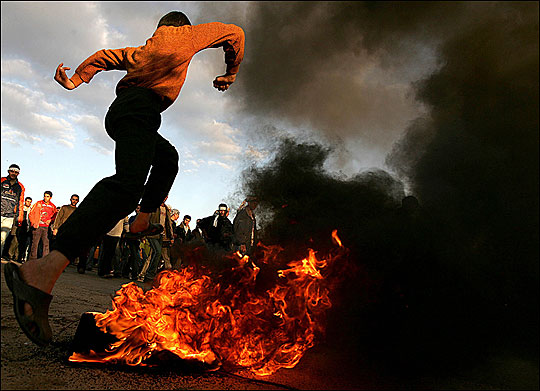 From NPR News, this is ALL THINGS CONSIDERED, I'm Melissa Block.

And I'm Michele Norris. Palestinian leader Mahmoud Abbas today called on Hamas to form a new government. That's after its huge victory in this week's Palestinian Parliamentary elections. The losing Fatah movement has, for now, ruled out serving in a Hamas-led government and Israel has ruled out peace talks with Hamas. Meantime, angry Fatah demonstrators in the Gaza Strip took to the streets to protest their movement's Election Day loss.

On Thursday, Fatah supporters seemed shocked and dazed by the size of Hamas's victory. Tonight in Gaza City surprise turned to anger. In Gaza City hundreds of irate Fatah supporters waiving the yellow Fatah flag set cars on fire, hurled rocks, and called for Palestinian President Mahmoud Abbas to resign. Others shouted for corrupt Fatah officials to step down. Gaza City Fatah supporter Kamal Abufuse (ph) says the movement is paying the price for what became a widespread culture of corruption. He says people have the right to be angry at fraud that went far deeper than simply pocketing cash.

Mr. KAMAL ABUFUSE (Supporter, Fatah Movement): (Through translator) Anybody who wanted a job had to know somebody inside Fatah and that was more important than your qualifications. This was inside every ministry and it all reflected badly on Fatah.

WESTERVELT: Today Ismiel Jania (ph), a senior Hamas official said he asked to meet with Abbas on Sunday to talk about forming a new government. Abbas's spokesman said there was as yet, no meeting planned but it is already clear that Fatah will not be part of the new government. Hind Khouri is a senior member of Fatah.

Ms. HIND KHOURI (Senior Member, Fatah Movement): My understanding is Fatah will not go into collision Hamas because Hamas has a very confident majority.

WESTERVELT: Two polls out today in Israeli newspaper showed deep divisions within Israeli society about whether to deal with a Hamas led government. Acting Israeli Prime Minister, Ehud Olmert said there would be no talks "with a Palestinian administration if even part of it is an armed terrorist organization." Fernand Geising (ph) is a senior Israeli political advisor.

Mr. FERNAND GEISING (Senior Israeli Political Advisor): As long as this organization continues to support and act on behalf of its cabinet that it's chartered calling for the destruction of the state of Israel, as long as it continues to remain a terrorist organization, as long as it's preaching in the Mosque is hatred towards Israel and the war that can only end when the Jewish people are completely destroyed, there is nothing to negotiate with this organization.