Accessibility links
An Endless Search for Weird New Minerals The biggest mineral show in the world gets underway this weekend in Tucson, Ariz. The exhibits are visually stunning, but part of the lure is that an unknown mineral could be unveiled. 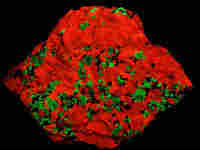 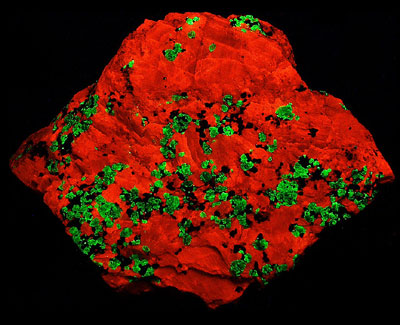 A typical sample of ore from Sterling Hill mine, now a museum in Ogdensburg, N.J. Under ultraviolet light, calcite glows reddish-orange and willemite, found in zinc ore, glows green. 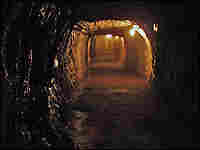 View along a mining tunnel inside the Sterling Hill mine. The rock walls here are made of an unusual variety of calcite which fluoresces bright reddish-orange under ultraviolet light. Herb Yeates hide caption 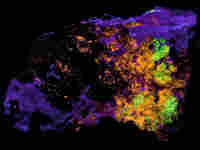 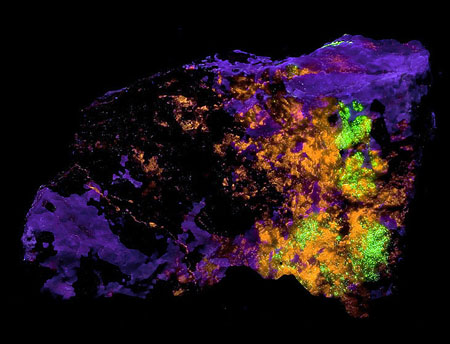 Hardystonite, a rare mineral found only at the Franklin mine in Franklin, N.J., is seen here under ultraviolet light. Clinohedrite, first discovered at Franklin, glows bright orange and willemite, a local zinc ore, fluoresces a brilliant green.

The biggest mineral show in the world gets underway this weekend in Tucson, Ariz. More than 40,000 people are gathering to gawk over gemstones and more exotic minerals, like bright orange squares of wulfenite and jagged needles of white natrolite.

One of the most exciting things that can happen at this show is for someone to unveil a mineral that science has never seen before. Collectors will pay thousands of dollars for rare new specimens. And even though people have been digging around for millennia, they're still stumbling across weird new things underground.

A perfect example of how people can go looking for one thing and find another can be seen inside a small mountain in New Jersey. Go through a metal door, and you're in the gray tunnels of the Sterling Hill mine, one of the richest and most diverse mineral deposits on Earth.

Geologist Earl Verbeek says that for mineral collectors, this is holy ground: "They just want to have all these bizarre, rare minerals in their collection, and this is one of the Meccas of the mineral world for them."

The mine is a museum now. But up until 1986, workers ventured down a half-mile to blast out black zinc ore. They also found a lot of strange stones in all that broken rock. In fact, Sterling Hill, along with a sister mine next door in Franklin, holds the world record for mineral discoveries: 67 new finds.

"Some of the minerals here are fabulously rare," says Verbeek. "There are about 31 to 33 of them that still have not been found anywhere else on Earth."

In a corridor known as the Rainbow Room, Verbeek flicks on an ultraviolet lamp and the walls suddenly throb with bright neon color. Fluorescent minerals in the walls glow bright yellow, red and green. It looks like the rocks are covered with weird glowing moss from outer space.

Altogether, geologists have found more than 300 minerals in these unusual hills. Peter Heaney, a geologist at Pennsylvania State University, says that's about 10 times what you'd find if you just went digging in your backyard. But most people don't know what makes a mineral different from a regular old rock.

Heaney explains that a rock is just a mishmash of minerals. He suggests that the next time you see a granite kitchen counter, take a close look: "You will see the outlines of different minerals. They have different colors, often times, different shapes," Heaney notes. "So it turns out that rocks are just made up of lots of different kinds of minerals."

If you could peer inside a mineral, you'd see that its atoms are arranged in an orderly, repeating pattern like cubes or hexagons. And each mineral is made from a unique combination of elements. The Earth has 92 naturally occurring elements -- things like iron, calcium and sulfur -- and they've had billions of years to mix and match. So you'd think there'd be an almost infinite number of minerals. But so far, geologists have only found about 4,000.

You can see most of them at the Smithsonian Institution in Washington, D.C. Go past the Hope diamond, through a side door, and you'll find a vault-like room where the museum keeps some of its newest discoveries. The walls are lined with glass cases of full of huge, dramatic crystals. Curator Jeffrey Post says that they are worth tens of thousands of dollars.

"All of these are natural formations that came from the Earth," says Post. "They're very desirable to collectors. And the prices of these have gotten to be quite high," says Post. "It's not uncommon to see some of the finest mineral specimens selling for more than $100,000."

Those prices create a big incentive to find new minerals. And Post says that most amazing finds can make their first appearance at the Tucson show. One example of is a deep raspberry pink mineral now known as pezzottaite. When it showed up at Tucson a couple years ago, it had just been unearthed in Madagascar. The seller was promoting it as a new color variant of beryl, an old mineral. Then, during the meeting, people realized that it contained high levels of the rare element cesium.

"That immediately got everybody thinking that this might be a new mineral," says Post. "So, of course, the prices went up, zoom! Everyone was thinking, 'Oh, a new mineral, great!' "

This one did turn out to be new, and like all new minerals, it had to get the blessing of an international committee, known as the Commission on New Minerals and Mineral Names. It reviews around 80 candidates every year. A quarter get rejected because they're just a new form of some old mineral.

Most new minerals don't look that spectacular. Post points to some tiny brown crystals that have grown on a big chunk of pink quartz. It's hubeite, a new mineral from China. "A lot of times, nowadays, when a new mineral is found, it's a very little bit of a grunge or a smudge on something else," says Post. That's because new technologies for analyzing minerals make it easier to study small samples. Geologists used to have to bash up large fistfuls of a mineral and dissolve it in acid; now, new instruments can peel off just one layer of atoms for study.

And even small smudges of minerals can be of interest, because many minerals have interesting structures that immediately suggest potential industrial applications. For example, minerals known as zeolites have an unusual structure that traps other chemicals. Post says synthetic zeolites are now used in everything from petroleum processing to cat litter. "Minerals are the products of nature's own laboratory," he says. "Many of these minerals form under conditions that are not easily accessible in the lab, or are just so unusual that we wouldn't think to try."

Unusual minerals can also hold clues about what was going on in the Earth as it formed long ago. That's one of the reasons why Post will be one of the thousands of people in Tucson this week. Like every one else there, he's hoping he'll see something that he's never seen before.