Accessibility links
Festival Honors Short Films Shot on Cell Phones Ithaca College in upstate New York is sponsoring a contest for the best short film shot with a cell phone camera. Entries can be no longer than 30 seconds and must include music, dialogue or other audio.

Cell phones do just about anything these days. You can send e-mail, download music -- and on some new phones, you can even capture video. But can you make a real movie with a cell phone?

Ithaca College in upstate New York has launched a contest to find out. It's called Cellflix. Like any film festival, there are judges and there's even a $5,000 grand prize. To qualify, submissions had to be shot on a cell phone or smartphone, be no longer than 30 seconds and include music, dialogue or other audio. 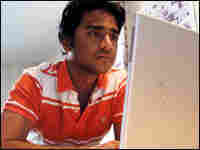 Sudhanshu Saria's Web Site
CellFlix Festival: Winners Will Be Announced on This Site