Listen
The Bath Riots: Indignity Along the Mexican Border 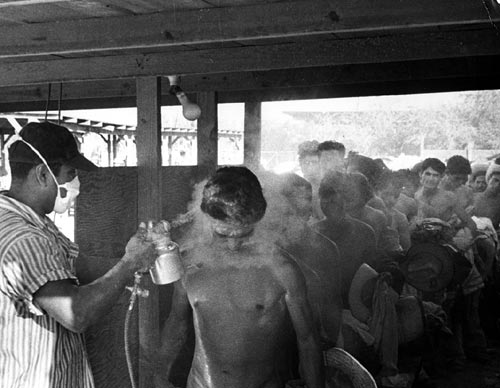 Contract Mexican laborers being fumigated with the pesticide DDT in Hidalgo, Texas, in 1956.

Author David Dorado Romo stands near the site of the old Santa Fe Bridge, where the Bath Riots occurred. The bridge was torn down in the 1920s. John Burnett, NPR hide caption 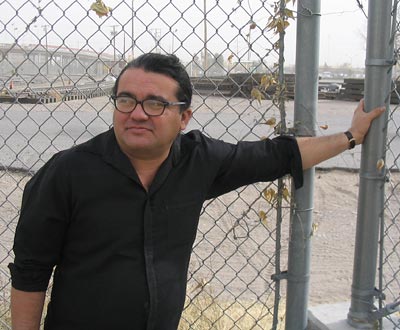 Author David Dorado Romo stands near the site of the old Santa Fe Bridge, where the Bath Riots occurred. The bridge was torn down in the 1920s.

For decades, U.S. health authorities used noxious, often toxic chemicals to delouse Mexicans seeking to cross the border into the United States. A new book tells the story of what happened when a 17-year-old Mexican maid refused to take a gasoline bath and convinced 30 other trolley passengers in 1917 to do the same. 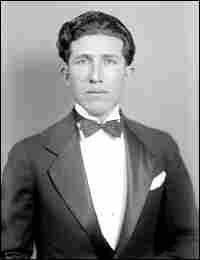 At the customs bath by the bridge... they would spray some stuff on you. It was white and would run down your body. How horrible! And then I remember something else about it: they would shave everyone's head... men, women, everybody. They would bathe you again with cryolite. That was an extreme measure. The substance was very strong.

Jose Burciaga, a janitor in El Paso in the 1920s

The maid, Carmelita Torres, crossed every day from Juarez to El Paso to clean American homes. The gasoline bath was noxious, but effective at killing lice, which carry typhus, says David Dorado Romo, an El Paso, Texas, author whose new book is called Ringside Seat to a Revolution. Before being allowed to cross, Mexicans had to bathe, strip nude for an inspection, undergo the lice treatment, and have their clothes treated in a steam dryer.

When Torres and the others resisted the humiliating procedure, onlookers began protesting, sparking what became known as the Bath Riots.

The Mexican housekeepers who revolted had good cause to be upset. Inside a brick disinfectant building under the bridge, health personnel had been secretly photographing women in the nude and posting the snapshots in a local cantina. A year earlier, a group of prisoners in the El Paso jail died in a fire while being deloused with gasoline.

The baths and fumigations (DDT and other insecticides were later used) continued for decades, long after the Mexican typhus scare ended. The practice was finally discontinued as health authorities realized the chemicals were dangerous.

Excerpts: 'Ringside Seat to a Revolution' 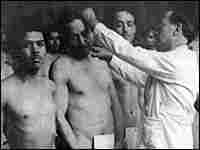 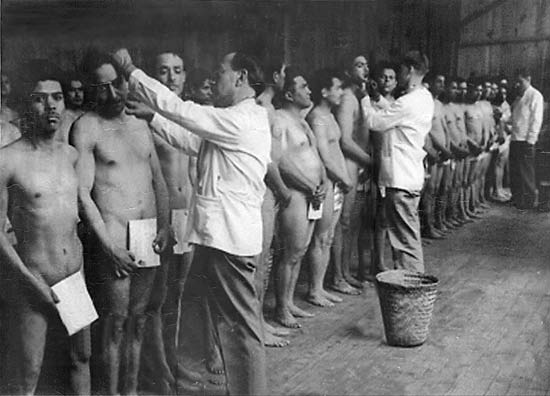 Mexican contract workers undergo medical inspection before being sprayed with pesticides, ca. 1942. The disinfections along the U.S.-Mexico border continued until the late 1950s. 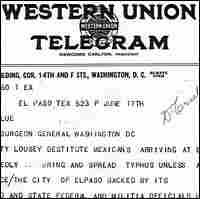 A telegram from El Paso Mayor Tom Lea to the U.S. surgeon general, calling for a full quarantine against Mexican border crossers. 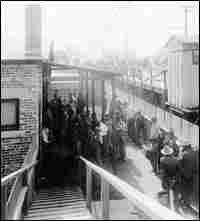 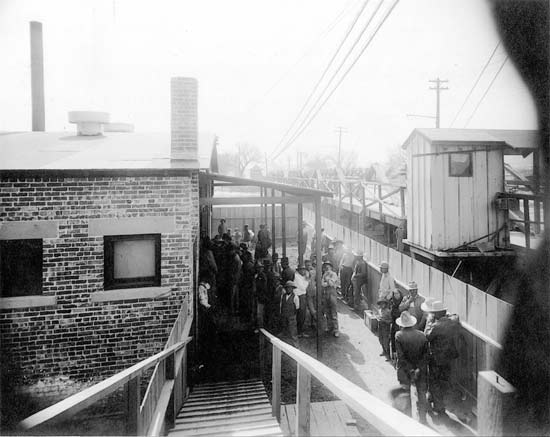 Mexicans wait to be bathed and deloused at the Santa Fe Bridge quarantine plant, 1917. 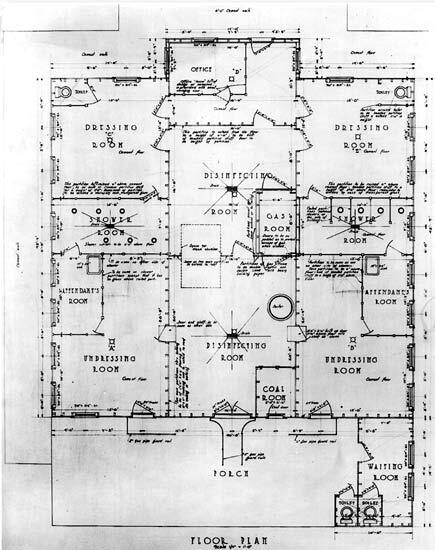 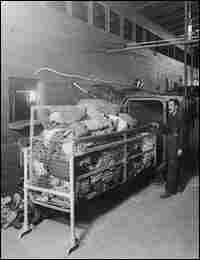 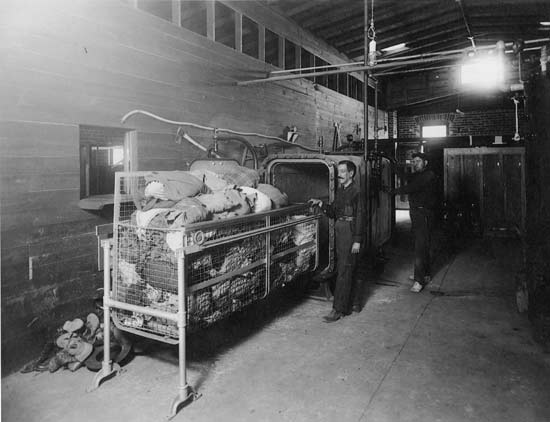 A steam dryer was used to sterilize clothing at the Santa Fe Bridge, 1917. 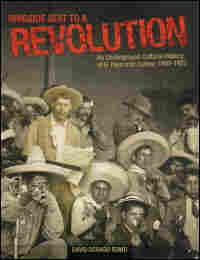 MY INTEREST IN the El Paso-Juárez Bath Riots didn't start with something I read in any history book. Most historians have forgotten about this obscure incident that took place on the border in 1917. I first heard of the U.S. government's policy that provoked these riots while I was still in high school. One evening, during a family dinner, my great-aunt Adela Dorado shared her memories with us about her experiences as a young woman during the Mexican Revolution. She recalled that American authorities regularly forced her and all other working-class Mexicans to take a bath and be sprayed with pesticides at the Santa Fe Bridge whenever they needed to cross into the United States. My great-aunt, who worked as a maid in El Paso during the revolution, told us she felt humiliated for being treated as a "dirty Mexican." She related how on one occasion the U.S. customs officials put her clothes and shoes through a large secadora (dryer) and her shoes melted.

Many years later, as part of my research for this book at the National Archives in the Washington, D.C. area, I came upon some photographs taken in 1917 in El Paso. The pictures, which were part of the U.S. Public Health records, showed large steam dryers used to disinfect the clothes of border crossers at the Santa Fe Bridge. Here it was.

But I also unexpectedly uncovered other information at the National Archives that took my great-aunt's personal recollections beyond family lore or microhistory. These records point to the connection between the U.S. Customs disinfection facilities in El Paso-Juárez in the 20s and the Desinfektionskammern (disinfection chambers) in Nazi Germany. The documents show that beginning in the 1920s, U.S. officials at the Santa Fe Bridge deloused and sprayed the clothes of Mexicans crossing into the U.S. with Zyklon B. The fumigation was carried out in an area of the building that American officials called, ominously enough, "the gas chambers." I discovered an article written in a German scientific journal written in 1938, which specifically praised the El Paso method of fumigating Mexican immigrants with Zyklon B. At the start of WWII, the Nazis adopted Zyklon B as a fumigation agent at German border crossings and concentration camps. Later, when the Final Solution was put into effect, the Germans found more sinister uses for this extremely lethal pesticide. They used Zyklon B pellets in their own gas chambers not just to kill lice but to exterminate millions of human beings. But that's another story.

Our story, instead, begins with the account of the 1917 Bath Riots at the Santa Fe Bridge. It is the story of a traumatic separation, an event that perhaps best epitomizes the year that the border between El Paso and Juárez, in the memories of many of its citizens, shut down for good.

REVOLT OF THE MEXICAN AMAZONS AT THE SANTA FE BRIDGE

"The soldiers were powerless."
--The El Paso Herald

THE EL PASO TIMES described the leader of the Bath Riots as "an auburn-haired Amazon." She sparked an uprising against a policy that would change the course of the history in El Paso and Juárez for decades. Some even consider her a fronteriza Rosa Parks, yet her name has been mostly forgotten. The "Amazon" was Carmelita Torres, a 17-year old Juárez maid who crossed the Santa Fe International Bridge into El Paso every morning to clean American homes. At 7:30 a.m. on January 28, 1917, when Carmelita was asked by the customs officials at the bridge to get off the trolley, take a bath and be disinfected with gasoline, she refused. Instead, Carmelita got off the electric streetcar and convinced 30 other female passengers to get off with her and demonstrate their opposition to this humiliating process. By 8:30 a.m. more than 200 Mexican women had joined her and blocked all traffic into El Paso. By noon, the press estimated their number as "several thousand."

The demonstrators marched as a group toward the disinfection camp to call out those who were submitting themselves to the humiliation of the delousing process. When immigration and public health service officers tried to disperse the crowd, the protesters hurled bottles, rocks and insults at the Americans. A customs inspector was hit in the head. Fort Bliss commander General Bell ordered his soldiers to the scene, but the women jeered at them and continued their street battle. The "Amazons," the newspapers reported, struck Sergeant J.M. Peck in the face with a rock and cut his cheek.

The protesters laid down on the tracks in front of the trolley cars to prevent them from moving. When the street cars were immobilized, the women wrenched the motor controllers from the hands of the motormen. One of the motormen tried to run back to the American side of the bridge. Three or four female rioters clung to him while he tried to escape. They pummeled him with all their might and gave him a black eye. Another motorman preferred to hide from the Mexican women by running into a Chinese restaurant on Avenida Juárez.

Carrancista General Francisco Murguía showed up with his death troops to quell the female riot. Murguía's cavalry, known as "el esquadrón de la muerte," was rather intimidating. They wore insignia bearing a skull and crossbones and were known for taking no prisoners. The cavalrymen drew their sabers and pointed them at the crowd. But the women were not frightened. They jeered, hooted and attacked the soldiers. "The soldiers were powerless," the El Paso Herald reported.

EL PASO MAYOR Tom Lea, Sr. used to wear silk underwear. This bit of privy information was passed on many years later by his son Tom Lea, Jr. to Adair Margo during an interview that is now at the Institute of Oral History at UTEP. The reason for the mayor's peculiar choice of lingerie was not extravagant dandyism, but rather, his deeply-rooted fear of contracting typhus from Mexican immigrants. The mayor's good friend, Dr. Kluttz, had informed him that the typhus lice does not stick to silk.

Tom Lea Sr.--silk underwear and all--represented the new type of Anglo politician during the "Progressive Era." Progressive didn't necessarily mean liberal back then. In Lea's case, "progress" meant he would clean up the city.

And Tom Lea was definitely obsessive about cleanliness. He would get rid of the old "Ring" of "dirty and corrupt" politicians, like the Irish Catholic incumbent mayor Charles Kelly and his Mexican supporters, who illegally paid the poll taxes for large numbers of both El Paso Mexicans and Juarenses. (The poll taxes were used to insure that most working-class Mexican Americans were excluded from the electoral process.) With the help of Pershing's troops, he would demolish hundreds of "germ-infested" adobe homes in Chihuahuita and substitute them with American-made brick buildings. Under Lea's administration, El Paso passed the first ordinance in the U.S. against Mexican hemp, or marijuana--a drug associated in the popular mind then with Mexican revolutionaries.

Tom Lea sent letters and telegrams to Washington officials for months asking for a full quarantine against Mexicans at the border. He wanted a "quarantine camp" to hold all Mexican immigrants for a period of 10 to 14 days to make sure that they were free of typhus before being allowed to cross into the United States. The local Public Health Service officials viewed the mayor's request as extreme.

"Mayor Lee (sic) wants an absolute quarantine against Mexico. When Mayor Lee gets excited he always wires some one in Washington. The last time this occurred he sent a message to the President," complained Dr. B. J. Lloyd, the public health service official stationed in El Paso.

"Typhus fever is not now and probably never will be, a serious menace to our civilian population in the United States," Lloyd explained to the U.S. Surgeon General. "We probably have typhus fever in many of our large cities now. I am opposed to the idea (of quarantine camps) for the reason that the game is not worth the candle."

Instead of quarantine camps, Lloyd suggested setting up delousing plants. Echoing the El Paso mayor's racist language, Lloyd told his superiors he was "cheerfully" willing to "bathe and disinfect all the dirty, lousy people who are coming into this country from Mexico." Lloyd added prophetically that "we shall probably continue the work of killing lice in the effects of immigration the Mexican border for many years to come, certainly not less than ten years, and probably twenty-five years or more." (If anything, Lloyd underestimated things. The sterilization of human beings on the border would continue for more than 40 years.)

From Ringside Seat to a Revolution, An Underground Cultural History of El Paso and Juarez: 1893-1923 by David Dorado Romo. Published 2005 by Cinco Puntos Press.

Cinco Puntos Press: 'Ringside to a Revolution'
Representation and Recognition on the Mexican Border 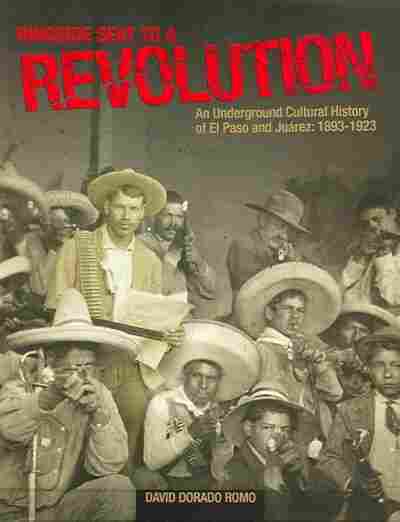 Ringside Seat To A Revolution

An Underground Cultural History Of El Paso And Juarez, 1893-1923