Accessibility links
Tommy Lee Jones, Exploring New Territory Actor Tommy Lee Jones also directs The Three Burials of Melquiades Estrada. It's the story of a man killed in Texas and a friend -- played by Jones -- who fulfills his wish to be buried in Mexico. Jones describes it a "journey" movie.

Actor Tommy Lee Jones also directs The Three Burials of Melquiades Estrada. It's the story of a man killed in Texas and a friend — played by Jones — who fulfills his wish to be buried in Mexico. Jones describes it a "journey" movie. 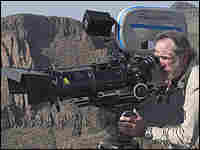 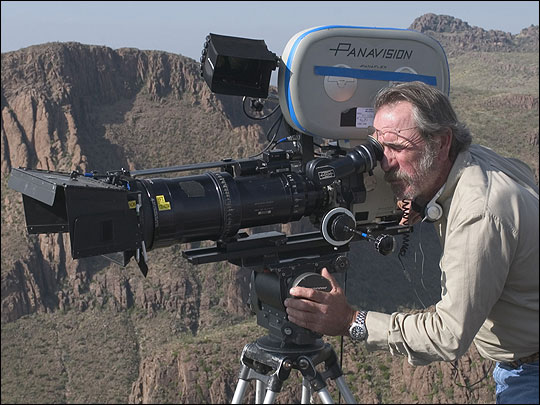 Melquiades Estrada is shot dead and then half buried in the hard-scrabbled borderland that go back and forth between Texas and Mexico. In this scene, a sheriff brings Pete Perkins a plastic bag with a few small possessions found on Melquiades' body; a family photograph is on top.

(SOUNDBITE OF MOVIE "THE THREE BURIALS OF MELQUIADES ESTRADA")

DWIGHT YOAKUM: Do you know who they are?

TOMMY LEE JONES: It's his wife and kids.

YOAKUM: Do you have any idea how to get a hold of them?

LEE JONES: Well, they live in Mexico. Can I keep this?

YOAKUM: Yes, I guess for a while. We're going to have to do an autopsy on him.

LEE JONES: When you get through, I want you to give Melquiades to me.

YOAKUM: I can't do that. Are you crazy?

SIMON: Thanks so much for being with us, Mr. Jones.

SIMON: This movie is based around a friendship between the man you play and the man, the cowboy, who rides into his life one day looking for water for his horse. But you present the idea that this is really one land we're talking about. And the border, in a sense, intrudes on one land. That just as the cows go back and forth, so do the people who herd them.

LEE JONES: Well, yes. It's a study in social contrast and a study of how things are the same on both sides of the river and how things are different. And what the implications confronting an international through the middle of a culture might be.

SIMON: Mm-hmm. There really are three burials to explain the story line a little.

SIMON: There's the one where he's found by the grave, the one by local officials. But then the one that his friend wants to give him that he feels he deserves.

LEE JONES: Well, yes. This Mexican exacts a promise from his boss and friend up on this ranch in West Texas, that if he happens to die north of river, that his friend would take him back home and bury him in his hometown and explain things to his wife.

SIMON: And it becomes a kind of road picture, not to compare it to Hope & Crosby but...

LEE JONES: Yes, a journey picture, really; which is an old, narrative form and classical structure wherein Mr. Hero begins in a way mundane, a rather possibly bad or evil place, and is compelled by circumstance to take a long journey through various other places. Usually there's an oracle somewhere along the way. Until finally, he winds up in a good place where he's able to relate more gracefully to the world around him having learned something and lead the audience and possibly learned along with him, or experienced the feeling of having learned something.

LEE JONES: It's a road picture, yes, in the same sense the Odyssey is or Don Quixote is.

SIMON: This is the first feature film you've directed.

LEE JONES: Yeah, but I don't know, I mean, I've directed a movie for television as you might say.

SIMON: Could we run a clip of Good Old Boys?

SIMON: From TNT. In this clip, you play a character named Hewey Calloway who eulogizes not only a specific dead old cowboy, but the American cowboy.

LEE JONES: (As Hewey Calloway) Well, we could say the old boy Rasmussen (unintelligible) stones crossing on the red river when most of us were following our mothers around the kitchen. Some say an old drifter like this might have used up his welcome, but how many times has a fellow just like this come up over a downed fence and rode into somebody's half quarters to tell about it or rode over the calf stuck in the mud, dropped a loop on it and pulled on it and rode on off without a thought to ever getting paid. Even when we turned our back on him, he never turned it on us, so here he is. We all better take a look at him before he rides on off because they ain't making anymore like him.

LEE JONES: People ask me to describe Huey Calloway, the character you just heard, and I've found it convenient to describe him as a Buddhist soul in a Calvinist world, and I haven't yet thought up a catch phrase for Three Burials, but it has something to do with the consideration of the mechanics of faith.

SIMON: Are you talking about kind of religious assembly faith or faith between people, a bond?

LEE JONES: I remember Flannery O'Connor being asked what faith means, the same question you're asking me, and she said faith is what you know to be true whether you believe it or not. And you can say that our recent movie takes that, looks at life from that perspective.

SIMON: What you're willing to live by.

SIMON: Mr. Jones, thank you very much for all of your time.

LEE JONES: Yes, sir, and thank you. I enjoyed talking to you.

SIMON: Tommy Lea Jones, who directed and stars in The Three Burials in Melquiades Estrada. The film opens in wide release February 3rd.